Interview with Beyond the Woods’ John Ryan Howard

Flickfeast were treated to an interview with actor John Ryan Howard, who played one of the lucky characters from Beyond the Woods (2018), an Irish Indie-horror film which has been praised for its use of character-driven plot. Braving the horror film, we find out if John Ryan Howard has managed to come from beyond the woods…(sorry)

Flickfeast: Evening John, thank you for agreeing to sit down and have a chat about a little gem of a horror film called Beyond the Woods (2018), directed by Sean Breathnach.  When it landed across my desk, the title intrigued me – what was your first impression of Beyond the Woods?

John Ryan Howard: Thanks for taking the time to talk to me Joe! My first impression was this is the movie I wanted to see when I first watched ‘Cabin Fever,’ Sean Breathnach might recall me saying this to him. I loved the movie ‘Cabin Fever’ until its conclusion when I discovered there’s no creature or demonic being which, for some reason was exactly what I had anticipated watching the film. I was very excited when I read the script for the first time and beforehand when Sean gave me a summary of the story without me having read the full script.

The character Ger, who you play, has some emotional baggage that he is dealing with…how did you get into the character’s mind?  What influenced your portrayal of him?

JRH: I related to the ‘Ger’ character very easily Joe because I used to be a very shy person and maintained that reputation up until about 16 years of age. To get into the character’s mindset I just delved into any social situation I’ve ever experienced where I didn’t want to be there at all, but for some reason felt obligated to be there on behalf of someone else, which I think is a very relatable, universal character trait. Being dumped by someone is also something very easy to relate to whether it be by a girlfriend or a best friend. 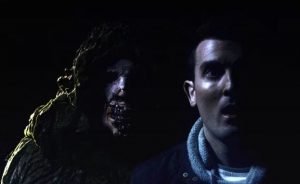 What did you think of Ger as a person?  What drew you to him?

JRH: What did I think of Ger as a person? I just thought of me! I think Sean Breathnach did a fantastic job of casting the characters in this film. He really cast all the actors knowing each actor’s strongest suitability. The character of ‘Ger’ couldn’t have been easier to relate to for me, I really mean that. What drew me to ‘Ger’ was Sean Breathnach offering me a role in his debut feature film, I would have played a tree!  I have long admired Sean’s work and knowing him personally I always believed in his work and have longed to work with him on a feature. I see a very big future for Sean, ever since I first met him about 8 years ago.

Now, that sinkhole – you all said how awful the smell was.  Were there any odors onset to help you with that?

JRH: No odors Joe, just a lot of cold!

On screen, I loved the chemistry between all of the friends – they were all so believable.  What was it like off-screen?  Can you mention any adventures perhaps?

JRH: Adventures off screen? I had so much fun making this movie with this cast and crew. During the filming of the sex scene I was downstairs with 5 or 6 other cast/crew members while they were recording audio upstairs in the bedroom. What a hilarious working environment to be in! Take after take of a threesome going on upstairs while the rest of us sit and listen in the downstairs bedroom. After a prolonged silence after filming we all hear our French sound recordist Hugo Pavery say ‘This time, more passion!’ in the thickest French accent imaginable! Of course we all erupted in laughter and consistently repeated impressions of said incident! We all got on so well even though I had never met a few of the cast members in my life – Sean McGillicuddy (Jason), Mark Lawrence (Ray) and Ross MacMahon (Shane) – they made me sore from laughing by the end of day one.

I had the pleasure of interviewing Sean recently, he said the weather was a challenge when filming.  What challenges did you face as an actor?

JRH: The biggest challenge for me was I ended up getting sinusitis during our January shoot week which coincided with minus 4 degrees in the woods filming at 4/5/6am. I remember only filming a scene for about half an hour with Irene Kelleher (Lucy) and a couple of inches of thick ice had appeared on a briefcase for camera lenses belonged to Kieran Fitzgerald. Every few minutes we would duck under an umbrella to shelter from sleet and snow. I had pounding headaches and hay fever symptoms every day that week and I was drained of energy which made it particularly difficult. That week of the shoot was a big physical challenge for me, you could wait 20 hours of being up waiting to do your scene before actually doing it and it would end up starting at 5/6am! I was physically drained that week but it’s a week I’ll never forget. I never felt the cold I felt that week filming ‘Beyond The Woods.’ 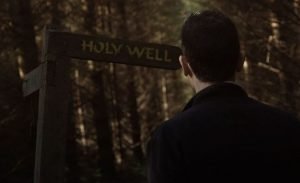 That sounds intense.  So how would you describe Beyond the Woods to someone who has never seen a horror film?

JRH: I would describe ‘Beyond The Woods’ as a psychological, atmospheric horror with a bit of Slasher. Or as a friend described it, a ‘horrorama!’

Presumably, the evil manifests itself based on the characters fears.  How would it manifest itself with you?

JRH: Jesus, I don’t know. I fear almost everything except spiders and clowns! I get serious cabin fever very quickly and turn into a Gremlin if I haven’t ate in 4 hours!

I’d still say clowns for me!  What knowledge have you taken away from working on Beyond the Woods?

JRH: Knowledge, I would say who you work with is of paramount importance. Nothing tops that. Choose your team very wisely.

Working in theatre, including performing in Oscar Wilde’s ‘The Picture of Dorian Gray’ must have been a fantastic experience.  How does theatre work differ from film?  Which do you prefer?

JRH:  I have always been a movie fan ever since I turned 7 years old probably. I became a huge horror fan at the age of 9 when I rented House 2: The Second Story! Movies are the ultimate dreams for me. I never wanted to work in theatre, I was very afraid of doing so. I had a huge fear of forgetting lines not being up in front of a crowd even though I probably feared that too! Then I realised in 2007 I had no choice if I wanted to be a professional actor I had to do a full-time theatre performance course.

I went to see a production of ‘A Midsummer Night’s Dream’ in the college amphitheatre the summer before induction and I shat a brick at the thought of doing what those actors were doing including a close friend of mine – Martin Condon – who recommended this course to me! So much so, I left half way through in denial! Then I faced my fears shortly after and took the jump, shortly after I was playing the lead role in shows running 2 and a half hours. I quickly became addicted to the drug that is theatre.

Which do I prefer? I prefer watching movies but the experience of watching an amazing theatre production is incredible and acting on stage is even more so. To quote Al Pacino ”Acting on film is you’re pretending to walk on a rope and if you fall off it doesn’t matter, you do it again. Acting on stage is you’re walking on a rope and if you fall off you fall off for real.” I’ll never forget the moment I went totally blank on my second night of my second ever show on stage. I thought I was having a heart attack. 2 minutes seemed like 32 minutes.

Movies are the ultimate dreams for me – John Ryan Howard.

You’ve been quoted as saying “I’d rather be at the bottom of a ladder I want to climb rather than the top of one I don’t.”  Do you think this still applies?  Where might you be currently on the ladder of your career?

JRH: That quote always applies Joe. Would I rather a brand new BMW I bought with money I earned as an accountant or a second hand much lesser car I paid for with money I earned as an actor. The latter always. What good would it be having loads of money spending the majority of your time working at a career that makes you miserable? I had serious pleasure buying a brand new 55” LED 4K TV with a cheque I earned from acting last year, I don’t think it would have been quite the same if it hadn’t been paid for with acting money. By the way I robbed that quote from a fictitious character in BBC’s The Office! Where might I currently be on the ladder? A lot further up than where I was when I borrowed that quote originally and far from the top where I’d like to go! I’m in a very good place right now though, feeling very blessed.

Recently, we engaged in some Twitter conversations about your future projects – what can you tell us about them?

JRH: Not much at all. They’re what I call definitely maybes! Lol! A comedy TV series if it transpires!

Sounds interesting.  Good luck with those!  What would be the perfect film role, the ideal role made for you?  Would there be a basketball link perhaps, as you played for the Neptune Basketball Club, didn’t you?

JRH: The ideal role? I think you don’t know that until it manifests. When I was cast as ‘Lord Henry’ in ‘The Picture Of Dorian Gray’ a good many years ago I felt completely miscast until I went in front of the audience and never felt so at home. Thanks to an incredible casting director – ‘Cal Duggan’- who saw something in me I hadn’t seen. I learned an awful lot about acting during that production that I used in portraying ‘Ger’ in ‘Beyond The Woods’ even though both productions couldn’t have less in common. I’m a massive horror fan so any great role in a horror feature is gold dust to me! Basketball? Those skills are long gone unfortunately! Thanks a million for your time Joe, I sincerely look forward to doing more interviews with Flickfeast!

John, thank you for your time- it has been enlightening, informative and most importantly, enjoyable!  We’ll see you soon at Flickfeast!

JRH: An absolute pleasure Joe, love your questions…and I’m delighted you like ‘Beyond The Woods’ so much! A real pleasure, thank you!

Read our review of Beyond the Woods (2018) here along with Joe Bull’s in depth interview with director Sean Breatnach.

Tomb Raider – A Legend Returns to the Big Screen