To celebrate its 15th anniversary, Red Bull Music Academy invited award winning director Ralf Schmerberg to create a full-length feature film about the life and processes of the artists in the academy. At their base forms, music and film are incredibly artistic mediums, ones that have been known to enhance and reflect each other in certain situations. In that regard, it’s easy to see why Red Bull chose such an intimate film-maker like Ralf Schmerberg to make their film, one with such an attentive eye to detail that’ll be able to capture the subject in its most natural form.

In celebration of Ralf Schmerberg’s What Difference Does It Make? We had a chat with the film-maker himself in the interview below, about his processes, difficulties, inspirations and techniques used during the making of his film.

Flickfeast: As I understand it, your task of making a film to commemorate the 15th anniversary of the Red Bull Music Academy, was a fairly open one. What were your specific processes, or aims on this project?

Ralf Schmerberg: My initial aim when I went abroad was to make a film completely unopposed. outside to inside, inside to outside, my first intention was to make a film that speaks about music and about life, one that applies to people that aren’t well versed in music. My own knowledge of music is so small, so when I visited these masters of music, I wanted to capture why they devoted their life to this cause, why they did what they do, everyday. I wanted to capture what different levels you have to go through to devote your life to music; fear, failure, success, what kind of routes and channels you’re forced to go through.

I wanted to know their fears, their aspirations, anything they could express about their life in music, something I could connect to on a human basis with. Yeah it’s related to music, but it’s also absolutely related to life, the processes of their life that they go through to make their music. I wanted to capture things like that.

FF: Would you classify yourself as a documentary film-maker?

RS: I’m not a documentary film-maker mainly, I come from a mixture of art, doing movies with no dialogue, I don’t really make objective documentaries. I like to approach things with a very simple naivety. I’m not a film-maker who extensively researches his topic, or only makes films about subjects I know. If I was to film an Eskimo, one of my very first questions would be why he wears so much fur? The questions are naïve, but those type of  questions often give everything I want to hear. So my approach is that I’m a guy who knows nothing and I can simply ask questions. Then in editing, I find the right things, put them in order, and the construction is simply that.

FF: So, in that same regard, you wouldn’t classify your award-winning film Problema as a documentary?

RS: No, no sometimes we artists struggle with what we are through all the classifications and labels. Usually documentaries come from the outside, looking inwards, informing the audience of the inner workings of a subject. Problema was our story, our film, our composition, so it wasn’t really a documentary, it was much more an art piece. I didn’t travel to a place, where a guy made a table, to make a documentary. That’s the problem being an artist, how do you classify that? Art is so vast as a topic, where as there are rules of documentary that we don’t follow, same with the fiction film, I’d personally define it as an installation.

FF: Where there any particular artists or personalities at the Red Bull Music Academy who really influenced the direction of the film, or your perception of the life of musical artists?

RS: Yeah, Lee Perry was an important one. He told me about music, his music, the type of music that he does. I sat with him, spoke to him, listened to him perform on the gig, he’s a man who could convert music into space, into music. It totally blew me away. When we were filming,  we had such a constricted time window, as you’re probably familiar with with the work you do. It’s very rare that you have a diamond in your collection, rarely do you have something truly great in the first few days of filming.  Brian was the second interview I did, and there were a lot of surprises there. Immediately we had a lot of crucial material that really defined the whole experience. But overall, I was really impressed about the qualities of the student, each of them, musically. I had this distinct feeling that I was surrounded by several people who could easily be the next big thing in music.

FF: Did you encounter any particular challenges or difficulties whilst making What Difference Does It Make?

RS: A project for me can be a very big challenge or a small one, with What Difference Does It Make? I had to develop my point of view, my perception, I had such an overwhelming injection of knowledge about music. I love music, but I really knew nothing about it until this point. A personal experience goes further than oneself, further than the aims of your goals. You have to live it, kind of. I just love walking around in the street, the public space, a lot of my images embody the public room, or space. My point of view is very much that of the general public, it’s not elite, it’s not informed, hence the naivete with which I approach all my projects.

We’d like to thank Ralf for taking some time to chat with us about his project. What Differences Does It Make goes live as of digital release February 18th. 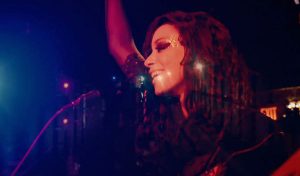