Despite the recent snow and atrocious weather, Irish Horror director Sean Breathnach and Flickfeast were able to stay warm and cozy while discussing Beyond the Woods  (2018).  So, sit back, relax and enjoy as we delve into what is beyond those woods…

Flickfeast:  What was the greatest challenge when filming Beyond the Woods?

Sean Breathnach:  There were a few challenges. The weather was a big challenge – it had rained a lot before we filmed so the woods were very soggy and muddy, and mostly not safe for running around in. So we had to find the driest parts and basically use them over and over, shooting from different angles to make it all look different. That was definitely a challenge. Lighting up the woods at night was a challenge too on our budget, but Paraic (cinematographer) and Keiran (camera operator) did a great job with that.

Where do you see the horror genre progressing?  Has a desensitized audience impacted on horror films?

SB:  I think the horror audience wants to be entertained – be that through suspense, tension, believable characters, crazy monsters, gore, supernatural scares – everyone has their preference. I’m not sure that a desensitized audience has had an impact really. I know some horror filmmakers have ratched up the gore and kills to ever more extreme levels, but most horror fans I know are into horror for a variety of reasons, not just how far their tolerance can be pushed. So I think the horror market will continue to cater for all tastes, and if you look at the horrors that are released every year you’d have to say there are amazing, inventive horrors coming out all the time. It’s great!

I think people who have an enthusiasm for film will find a way to get their films made. – Sean Breathnach

The sink hole unleashes all sorts of horrors beyond the woods, why did it open up? Was there a deeper meaning to this?

SB:  It opened up because the demon wanted to have a little fun! Demons get bored like everyone else, sometimes they need to go on a break and let loose 🙂 But like most things demonic, there are rules, so once the sinkhole is opened the demon can’t return without certain conditions being met.

Keeping things in our imagination makes things scarier, if given the budget, how might the sinkhole have appeared on screen?

SB:  The sinkhole was in the original script, but we had to let it go as we couldn’t do it justice on the budget we had. It would have been very dark, lots of smoke, veins of fire, lots of roots and tendrils leading down into a never-ending darkness.

I loved the interactions between the characters – they felt so believable, what was it like working with a small cast?  What was it like behind-the-scenes?

SB:  It was as much fun as you’d imagine! Not only are they very talented but they are also wonderful people to be around. When they weren’t on set they were cooking the rest of us breakfast or lunch, or bringing in coffee, or driving the long distance to the shop to pick up supplies. You couldn’t have a better rapport between cast and crew. We all became very close friends.

Many industries, such as the gaming industry have an indie sector boom. How do you predict the indie film sector will develop?

SB:  The indie sector has been great for gaming and for film. A lot of things are being made that may not have been made otherwise. But even within the indie film sectors there are many different levels. To Hollywood a three million dollar movie is an indie. Then you have people making films on an iphone. I think people who have an enthusiasm for film will find a way to get their films made, and the indie sector will be the incubator for the film makers of the future.

How did the idea for Beyond the Woods come about?

SB:  It was the fusion of two ideas. I had watched the indie sci-fi film “Coherence” and I was really impressed with what they achieved with an ensemble cast and limited sets. I thought it would be fun to do a horror in a similar vein. But I didn’t know where I might go with it. Then, the next day, I read in the paper about a sinkhole that had opened in China and was burning at 800 and the locals were calling it the gates of hell (so now you know where those lines came from!) That particular sinkhole wasn’t very impressive, but the wheels were turning – I could marry these two ideas. So I got to work!

Each character has a different experience with the evil presence, presumably based on their fears – what might your experience be? 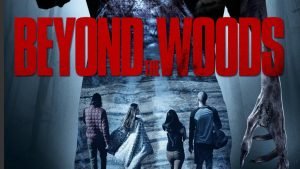 Eww, ours might involve clowns…which character would you relate to the most?  Why?

Sean Breathnach:  Having written all of them I suppose I can relate to them all in some way, but none of them are anything like me – debonair, sophisticated, life and soul of the party…

What is the process for directing as an indie director? Do you feel it is different to the alternative?

SB:You have much more freedom as an indie director. You have that thing all directors crave – Full Creative Control. This can be a blessing and a curse, you still need to be able to listen to the talented people around you. But that freedom is a wonderful thing.

I was fortunate enough to engage in some Twitter conversations with John Ryan Howard about future projects with a couple of the actors – is there anything in the pipeline for yourself?

SB:  More and more each day as it happens! I have two feature films in the pipeline – one is about a creature living in an old house, the other is about a mysterious UFO-style cult. I’m also working on a short horror set in a castle that I’m hoping to film over the next few months.

Regarding those two projects…can we get any exclusive news or information?  When do you expect them to be released?

SB:  They are both at a very early stage. The creature horror is a couple of years away – it would require a higher budget in order to reach its full potential. The cult film is called “Bone Creed”. I am taking it around to producers at the moment to guage interest. I’d love to start filming that this year or early next year if things work out that way.

A film should take me on a journey and by the end of it, I should have changed. Even just a little bit. – Sean Breathnach

What is your favourite part of being a director? Is there any part you were less enjoying?

SB:  I love every part of it. The variety is the best part. You can be indoors at a computer, planning the film, coming up with the shots, the art, the set design. Then you’re meeting the actors, helping them bring their characters to life. Then you’re on set, watching it all come together. Then the magic of the edit, vfx and the grade. And then you get to watch your film with an audience. There isn’t a part of it that I don’t like.

SB:  I suppose both have their uses. Too much of either is no good. Praise can make you feel invincible and criticism can devastate you. But the longer you go on the thicker your skin becomes – and in this industry you need very thick skin. Most of us could wallpaper the house with rejection letters. You can’t take any of that personally. It’s always hard at the start, but if you keep going you’ll end up finding your way. You learn to separate the haters from those who are offering useful criticism. You take from both praise and criticism what you can, and you move on.

Describe the ideal qualities of a film. What do you look for when sitting down to watch a film?

SB:  I want to feel something. Fear, melancholy, happiness, hope, anger, inspiration – just something. A film should take me on a journey and by the end of it, I should have changed. Even just a little bit.

What extras would you have liked to include on the DVD release?  Are there any potential deleted scenes…? Any which could make there way here?

SB:  It would have been nice to have some behind the scenes video so people could get to see how it was on set. Maybe a walk around the location would have been interesting for people too. There are a few deleted scenes but I took them out for a reason! There are some longer dialogue scenes and a few scenes of the monster in a different costume, but they’ll be staying locked up here for now.

It has been an absolute pleasure, thank you Mr Breathnach.

Check out our original Beyond the Woods review.

Beyond the Woods is out now on DVD.

Fantastic, to the power of four …..

What are the best film catchphrases?