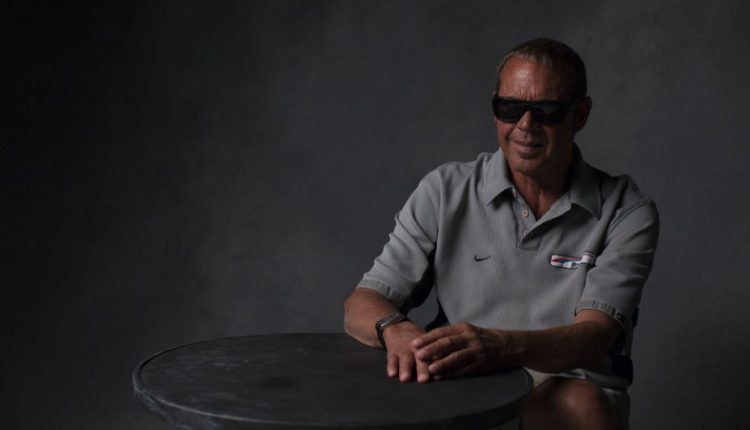 Chad (son of Steve) McQueen and Co-Director Gabriel Clarke got together with Flickfeast to discuss Steve McQueen: The Man and Le Mans.

After trying to compare the West Midlands to Palm Springs through references to Ozzy Osbourne, Gabriel reigned us in and we got down to business.

Flickfeast: So I watched Steve McQueen: The Man and Le Mans and I was really impressed. To be completely honest with you, I’ve never been a massive car fan but I was enthralled with this documentary throughout and I think other non-racing fans will be too. Was that one of the aims when making the movie?

Gabriel Clarke: I’m not a racing fan per se, that’s not what drew me to the film. I’m certainly a Steve McQueen fan. It was just in researching the story, I’d been nudged onto this by our Executive Producer Andrew Marriot, who I made a documentary with called When Playboys Ruled the World about Barry Sheen and James Hunt, about five years ago for television. That was about two great racing guys, but essentially it was their story as men as well and the backstories behind it, the archive etc.

So just to be nudged on to this story about the making of Le Mans, it was the story, the universal themes: Hollywood star at the height of his game, incredibly powerful with an incredible passion to make this one film which he’d had for the best part of a decade and the price that he was willing to pay and had to pay to get this film made. So it was these big universal themes set against the backdrop of the greatest race at that time in the world which drew me to it. So hopefully, if you’re not a racing fan that’s why this documentary is for you because of those broader films. If you are a racing fan then clearly you are going to enjoy it because there’s never been a film like Le Mans.

There’s a certain irony there as well as Le Mans was criticised and got into a lot of trouble because of the lack of plot and lack of script, but there’s universal themes (in this documentary) that everyone can relate to. Chad, do you think the reason you kept on racing was because of quiet competition with your father?

Chad McQueen: Not at all, not at all. I looked up to my dad. He got me riding motorcycles when I was six years old, in the dirt. I started racing at nine. It was a way for us to bond and spend weekends together, not throwing the ball around but racing motorcycles. I looked up to my dad and he’s someone that I aspired to be as fast as but no, if you talk to Michael Andretti about Mario Andretti I don’t think there was ever a competitive thing against his dad, it’s just…

…following in their footsteps?

So when you and your father raced, did he ever let you win? Or did he push you as much as he could?

C: I never got a chance to race side by side in cars with him, but motorcycles, I was a little kid so I was on a mini-cycle and he was on the bigger motorcycles. But it was like having Yoda…like having someone you can learn from. If I had a problem going into a corner or something I could say “Dad, what am I doing wrong?” and he could point it out and ultimately I could get it right.

So why now with the documentary? What made now the right time?

G: Why not? One of the things about the story is it’s pretty timeless. There’s no need for a particular anniversary.

C: There’s no statute of limitations on it. I think it needed to be told and I’m glad that we’ve done it. I’m really excited and I want everyone that reads this to please go see the film.

I knew Steve McQueen as The King of Cool from The Great Escape, Bullit, The Thomas Crown Affair but this documentary shed so much more light on him.  Chad, did you find the process of making the film brought you closer to your father in the way that this documentary brings him closer to the viewer?

C: Yeah, I mean I’m standing a little closer to it, but God it just brought back so many great memories. Some not so great. On the whole I’m just so happy with this project and like you said, you don’t need to be a motorsports fanatic to watch this film to be sucked in and when something sucks you in…that’s a great piece of filmmaking.

G: Chad, the letters that we got you to read on set during the interview – that was new to you wasn’t it. The comments that Steve had made (on rival film Grand Prix), that was truly authentic and they were great moments to film.

C: Yeah, I’d never seen that before and everything you see is a true reaction. They did the same thing with (Le Mans driver and amputee) David Piper about the proceeds being donated…I mean, that reaction that he had was really heartfelt. To me, to read the notes of the comparison of Grand Prix to Le Mans…that was just brilliant. That was totally my Dad and totally Alan Trustman (McQueen’s screenwriter). It was quite hilarious.

The thing that got me was about Steve pissing off of his balcony onto James Garner’s flowers.

C: Yeah, we lived above him on Oakmont and my dad would just toss beer cans down there. But James was our neighbour and were friends so it was all in good fun.

R: That was just friendly competition, then?

Going back to David Piper’s accident. The documentary reveals that it reminded Steve of the vulnerability of life and made him turn his back on racing.

C: My dad had told me after the film, he said, “Son, I thought I was gonna get killed every day.”

And that’s the scary thing…but it didn’t scare you away from racing yourself did it?

C: Well, that shows what a dummy I am! (Laughs) If you’re in a racetrack racing and someone gets hurt or loses a life, you still drive, y’know? I was surrounded by the two things: film and motorsports, and motorsports always seemed to attract me more.

Do you think that’s because with motorsports, the gratification is instantaneous, whereas with acting it’s delayed until people see it?

C: Yeah, moviemaking, not that I was any good at it, but I found it tedious. Repetition over and over. Filmmaking’s great but for me, listen, as far as acting goes, you know what they say: “Talent skips a generation,” so I’ll leave that to my kids.

That leads to my final question. I was massively nervous about talking to you today because my first experience of you was as Dutch in The Karate Kid.

And seriously, as a character I hated you when I was young.

Of course it was and it worked. So maybe that bit about talent skipping a generation is not always quite right but I still wanted to see you get beaten up at the time.

C: Yeah! And by the way my older son Steven (R. McQueen) is quite a good actor and he’s been in a few TV series: The Vampire Diaries and Chicago Fire. So check him out he’s quite the talented kid.

Will do. Thanks for talking to us today.

Steve McQueen: The Man & Le Mans will be released on DVD, Blu-ray, and on iTunes, Amazon, and Google Play on June 5th. For the Flickfeast review, click here.
[youtube https://www.youtube.com/watch?v=gaWhhpS8Leo]