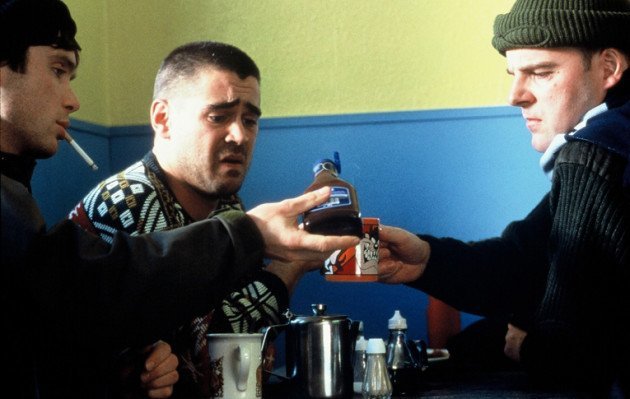 The best of cinema from the Emerald Isle

There is a special fondness among Irish film fans for homegrown cinema. Quite aside from the quality of the work (which, in many cases, is on a par with filmmaking efforts anywhere else on Earth), there is a certain thrill in hearing one’s own humble colloquialisms broadcast on the same screen as the industry’s biggest blockbusters.

With the help of this unapologetic partiality, we have put together a list of my top 10 favourite Irish films. Some have enjoyed widespread critical acclaim, whilst others have failed to make a splash outside of the Emerald Isle, but all are superb works of film that share an unmistakable Irish charm.

The pursuit of land ownership is something of a national obsession in Ireland, and disputes over land have characterized many of Irish history’s good stories. Very few of these stories, factual or fictitious, have enjoyed as warm a national regard as The Field. Originally written for the stage by John B. Keane, the story unfolds in a neglected corner of rural Ireland in the 1930s. Bull McCabe (Richard Harris) has leased and farmed the eponymous field for his entire life, but has his livelihood threatened when a wealthy American (Tom Berenger) expresses his interest in buying the land from Bull’s landlady. A tenacious sort, Bull is unwilling to let it go without a fight. Despite its setting, this is not a tale of heroic struggle against hegemonic oppression. Bull is a layered and often inscrutable protagonist, and shows little mercy to those around him, even when it is clearly deserved. Harris’ panache in the role earned him an Oscar nomination, but John Hurt’s turn as Bull’s bewildered sidekick is equally impressive.

Calvary, directed by John Michael McDonagh and starring Brendan Gleeson, was conceived by the pair late on during their production of The Guard. While tonally similar in many ways, Calvary makes fewer attempts at black comedy and dwells instead on more sombre issues. Gleeson plays a priest who, at the film’s outset, is informed by an anonymous visitor to the confessional box that he will be murdered in a week. We are then presented with a collection of would-be killers, and spend the film guessing whose motivation to kill the priest (for everyone, strangely, seems to have some) is strongest. Calvary tackles numerous weighty themes, including clerical abuse, familial dysfunction, psychological ill-health and even cannibalism. It is by no means light-hearted, but it succeeds in treading difficult ground without becoming depressing, and offers an intriguing insight into the role of the Catholic Church in a society rapidly leaving it behind.

Featuring what are now some of Ireland’s most recognisable acting exports in Cillian Murphy and Colin Farrell, Intermission exemplifies the aptitude Irish cinema has for dark humour. The storyline flits between different members of the ensemble cast and mainly concerns dysfunctional relationships and petty crime, culminating in a poorly devised kidnapping. It’s an unpredictable and frequently wacky experience, but it carries an unmistakeable knowledge of the quirks of Dublin folk, and is unafraid to get its hands dirty in portraying them. Also, for the sake of trivia, the bus crash scene holds the record for the biggest single stunt ever committed to film in Ireland.

An outspoken advocate of Travellers’ rights, John Connors made headlines earlier this year when he denounced the Irish film industry’s shabby treatment of his people while collecting his Best Actor award at the IFTAs for the lead role in this film. Cardboard Gangsters, widely lauded upon its home release, has likely done no harm for his cause. Connors’ Jay is an aspiring gangster who, along with three of his friends, hopes to become a figure of consequence in Dublin’s criminal underworld. It plays out, in parts, like an Irish answer to Scarface; progression as a criminal is the ultimate goal, and the gangsters’ viciousness is looked upon with near hero-worship. That being said, it deals with the nastiness of violent criminality in an unflinching fashion. A gripping and immensely enjoyable watch from beginning to end. 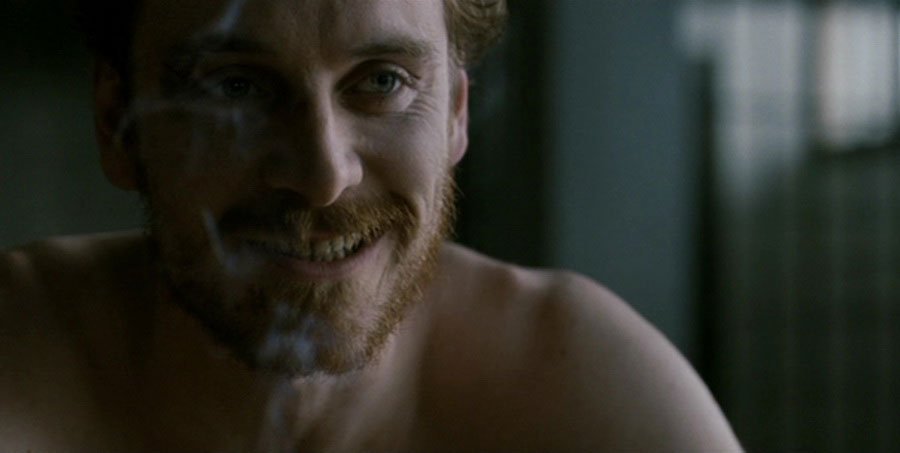 Steve McQueen’s historical drama concerns one of the most famous events in recent Irish history. 1981 saw a number of Irish republican prisoners undertake a hunger strike in Long Kesh prison to try to regain political prisoner status. They were led by Bobby Sands, this film’s protagonist. Hunger gives us 96 minutes of intense, brutal drama, and a harrowing insight into what was a profoundly difficult time in the development of the Northern Irish state. The film is notable not least for Michael Fassbender’s physical dedication to his performance; he shed 16kg to effectively play the role of Sands as starvation progressively ravaged his body.

Damien McDonnell’s drama concerns two young men with severe physical disabilities as they attempt to escape the bubble-wrapped world of full-time care. The film attracted criticism from some corners for dealing improperly with the theme of disability, most particularly for choosing two able-bodied actors (in James McAvoy and Steven Robertson) to play the lead roles. Leaving this aside, however, Inside I’m Dancing is an undeniably tender piece of cinema, which takes an innovative look at the psychological implications of society’s pitying attitude to those living with such afflictions. McAvoy’s performance, as a man who remains incorrigibly brash and spirited despite being immobile from the neck down, is the film’s highlight.

Roddy Doyle’s Barrytown trilogy of novels were all committed to film in the early 1990s, but none to such hilarious effect as The Snapper. The second instalment of the three, this film follows twenty-year-old Sharon (Tina Kellegher) as she deals with the unwanted pregnancy that results from a drunken tryst outside a pub. The Ireland of that era was infamously cruel to women who fell pregnant outside of wedlock, and there could easily have been hundreds of retellings of a tale like this that would not have borne any resemblance to a comedy. Luckily for Sharon (and for us) Doyle saw the humour in the prejudices of the time. The working-class Rabbitte family provide a perfect vehicle for a comedic dissection of the more regressive elements of the epochal Irish society. Looking back today, the film provides a poignant insight into a period of pivotal change for Ireland. Colm Meaney’s uproarious performance as Sharon’s father earned him a Golden Globe nomination.

Michael Inside shares many similarities with Cardboard Gangsters. It was released in 2017 for starters, and it also charts the trajectory of a young man’s journey through various parts of Dublin’s crime scene. Here, however, there is none of the glorification that comes with Connors and co.’s gangster flick. Michael (Dafhyd Flynn) is a young man incarcerated for drug possession. His experience of imprisonment, and Ireland’s justice system in general, provide a fascinating insight into the realities of cyclical criminality in Ireland. Michael is not allowed to come across as an innocent victim of an uncaring judicial system; it is left to us to decide whether he has been let down by society, or simply by himself. Moving performances and evocative storytelling make this possibly the finest Irish film of the decade thus far.

Another film that takes a touching look at the difficulties imposed by physical disability, My Left Foot features what is arguably the greatest performance of arguably the greatest actor of a generation. Daniel Day-Lewis claimed the first of his three Oscars for portraying Christy Brown, an Irish writer and artist who suffered from cerebral palsy, and could only write, draw or paint with his titular left foot. The film is a noteworthy achievement for many reasons, the most obvious being its extraordinary subject matter. Christy Brown is revealed to be a remarkable individual; talented and fiercely courageous, but also decidedly stubborn. Day-Lewis’ performance is nothing short of a masterclass in method acting, and the film’s ability to retain a positive voice despite the trials faced by its protagonist make it an inspiring watch. 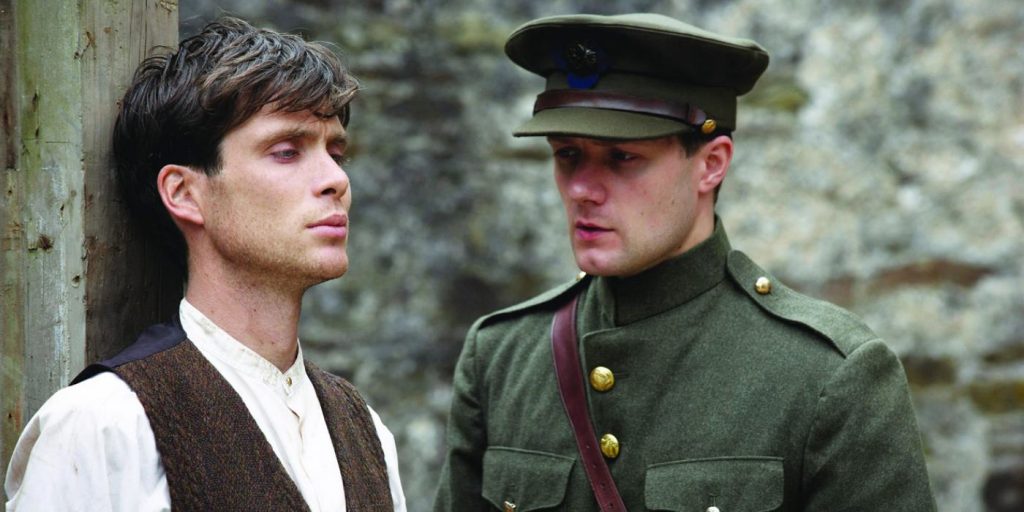 It is somewhat fitting that the top film of this list concerns itself with the theme which has most influenced Ireland’s storytelling culture; her struggle for freedom. There have been countless films, books and songs penned on this topic, but few pack the emotional punch of this movie. The tale is of two brothers (Cillian Murphy and Padraic Delaney) who fight doggedly for liberty from British rule only to see their movement (and the families and friendships within it) torn apart by civil war. Unsurprisingly, its portrayal of British imperialism courted controversy at the time of its release, with some commentators dismissing it as propaganda.

Most impartial observers seemed to quite like it, however; it claimed the Palme d’Or at the 2006 Cannes festival, and became the highest grossing independent Irish film ever, until The Guard knocked it off that perch five years later. Its true focus is on the human cost of war; we are made to feel the pain of a mother as she loses her son, a wife as she loses her husband, a brother as he must take up arms against his own brother. It’s not easy viewing, but its focus on its characters and touching stylistic approach, as well as the powerful leading performance given by Murphy, make it one of the most emotive war films you’re likely to see.

Have we overlooked an Irish film gem? Found one that doesn’t belong on this list? Let us know in the comments below!