An interview with Kelly Fyffe-Marshall and Tamar Bird

Haven is a remarkable short film, written and directed by Kelly Fyffe-Marshall and produced by Tamar Bird. At just four minutes long, the story, centered around a mother and daughter, has proved to be amongst the most thought provoking and original short pieces of the last few years. Following on from its recent screening at the SXSW Film Festival, we spoke with both Bird and Fyffe-Marshall about the film, it’s themes and the challenges of the subject matter.

Kelly: Tamar and I met on set 6 years ago where we were both volunteer PA’s on a feature film.

Q. Did you both attend film school?

Tamar: I did not attend film school. I have been working and learning in the film industry for six years.

Q. Where did the idea for Haven come from?

Kelly: I was speaking with my DOP Jordan Oram. We were talking about making a powerful short film in a room with two characters. I came home that night and came up with Haven. I thought about something for Black Women, like getting our hair done every Sunday. When a little girl is in this safe Haven what would she say? What would she confess?

Q. Was it always conceived as a four-minute piece?

Kelly: For a while I played around with giving Haven more of an ending. In the end, I felt like no conclusion is the best ending. 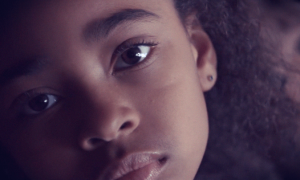 Q. Can you speak a little about the tone of the film, which shifts from
comedic into something far darker?

Kelly: I feel like the best way to change people’s mindsets is to give them familiarity to make them feel comfortable. Without you really knowing you feel at home with the two characters in the first 90 seconds. You connect with them so when the little girl delivers her last line it hits you hard. It delivers a blow. As an audience, you feel connected.

Q. You have both worked in multiple roles within productions, including
theatre. Do you find the creative process differs across mediums, or are
their similarities?

Kelly: Going from theatre to film for me is quite similar. I’ve always wanted to affect the audience’s way of thinking and perspectives. At the core of it all my creative process stays the same.

Tamar: Theatre and film have similarities and the end goal always remains the same. You want to evoke thought and touch on emotions, leaving the audience wanting to experience more.

Q. Do either of you have a preference when it comes to material, or do you
want to tackle multiple genres?

Kelly: I enjoy drama. I like stories that are human and real, I feel like the best vehicle for that is drama.

Tamar: I love drama but comedy and kids programming is a genre I will explore. Comedy has always been a big part of my life, turning my pain into laughter.

Q. Do you see the relationship between the industry and women’s roles
within the industry, changing significantly? It certainly seems to be in a
moment of transformation.

Kelly: I think we are right on the breakthrough of a transformation for women in this industry. I’m so used to being the only women on set, with the exception of hair and makeup. I make it a mission of mine to bring more females on set and people of colour. It is important to have inclusion so that stories reflect that. We live in a world that should be reflected in art.

Q. Have you experienced the kind of discrimination that is being discussed
at the moment?

Kelly: I haven’t experienced anything like that has happened in this film. It isn’t my story but it is my responsibility as a filmmaker to tell these stories.

Q. Are there artists that you both look up to within the industry?

Kelly: As a Black female director and writer I look up those who have travelled this path before me like Oprah, Ava DuVernay, Barry Jenkins and Canadian director Stella Mcghee

Tamar: I look up to woman have broken the mold of what an executive is.

Q. What kind of a budget were you working from?

Tamar: This project had a $200 budget, many great people volunteered their services, time and equipment to make Haven what it is.

Q. Are there any challenges specific to the short film form that change how
the film gets made?

Tamar: The challenge of a short film are getting your point across in a limited amount of time, also money. For Kelly and I we lost our equipment the night before we went to camera. With no money and dependent on favors, it was a struggle.

Q. How large a crew did you have?

Tamar: The crew was an even mix of women, people of colour, Caucasians and men. The crew was organic and was about the skills. I do think it is important to give opportunities to those who normally don’t get them. Our upcoming web series has a woman of colour as a head of the departments.

Q. What kind of cameras did you shoot on?

Tamar: We filmed it on a Black Magic Ursa Mini.

Q. Was there anything specifically that you wanted to achieve visually? Did
you work closely with the DOP?

Kelly: I wanted to make sure that there was a connection with the audience. Having a DOP that understands my purpose for filmmaking is important. The understanding I have with DOP Jordan Oram and his understanding he has of my purpose helped us collaborate on the project. The shot when the character Jada looks directly into the camera was a collaborative effort and what I believe is the best frame of the film.

Kelly: I used Instagram to cast for Haven. I knew what I was looking for. I’m a new age director who works with people depending on vibe. I really love Tika and her online persona. She is someone who believed in transparency and love. I direct messaged her and she agreed. I later found out that this was her story and she connected with it on a deeply personal level. The troubles I had were finding Jada’s character. I approached many mothers and was turned down. I finally met with D’evina, she is incredibly mature and was able to pull of the role.

Q. Given the nature of the material, were there any issues with finding the
young actor, D’evina Chatrie?

Kelly: I reached out to D’evina’s mother and she was hesitant about the role but knew he daughter was mature enough, and the importance of the material. I worked with D’evina for 5 hours before the shoot. I don’t take for granted that I was one of her first sex-ed teachers and I made sure to be gentle and purposeful. I gave her a coping mechanism and made sure she knew that after making this film she’ll now be my best friend.

Q. How has the film been received so far?

Kelly: The reactions have the film have been far greater than I could have imagined. I made this film knowing it would be powerful but I didn’t know how truly powerful. I have had conversations with people who have been through this abuse, and this film has helped them come out to their family to people who are in tears because they didn’t believe someone who had confessed to them. I have also had a university add my film to their course work, teaching students how to make a complete film in under 4 minutes.

Q. Do you have plans to work together again?

Kelly: Tamar is my creative partner so as soon as I write a script she is the first producer I approach. We currently have 3 shorts, 1 web series and a feature on our roster.

Q. What’s next for the both of you?

Haven is currently on the festival circuit. You can read our review here.