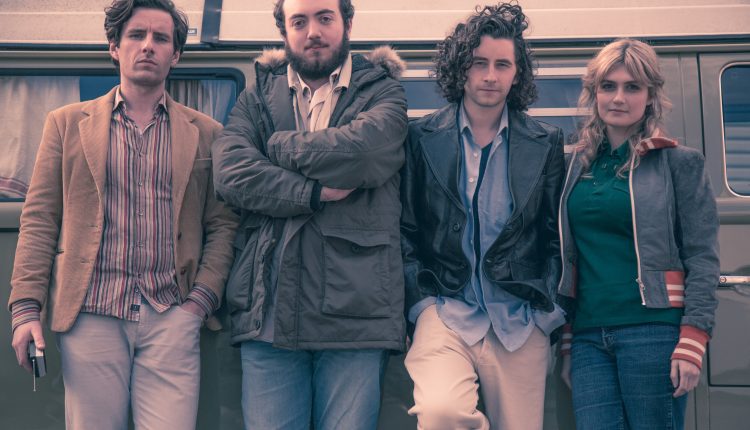 Kubrick By Candlelight is a big-scale, big-hearted romantic comedy set behind the scenes of the filming of the Stanley Kubrick’s Barry Lyndon, which shot in Southern Ireland in 1973. As part of Flickfeast’s KubrickFeast, our man Graham Woods got to pick the brains of Director David O’Reilly on how he squeezed ninety Kubrick references into his film, but how he didn’t use ninety takes.

So, David…why choose Kubrick and why choose Barry Lyndon?

D: I definitely didn’t pick the easiest of options! Kubrick by Candlelight is a period piece within a period piece. It’s set in the 1970s and filmed on location in Ireland. A film about “behind the scenes” of a feature film instantly throws you into “big” things; extras, vehicles etc. I wanted to capture the idea of the circus rolling into town, the feeling of Hollywood glamour invading a small Irish town. But then you also add Kubrick into that; you want to see Kubrick. When I concocted the idea of setting the short around the making of Barry Lyndon the first thing the producer I work with said was, “Oh my God, how much is that going to cost!”

But from a creative point of view, I’ve been a location scout for feature films for around fifteen years, so luckily I’m used to painting on a bigger canvas.

FF: So, was part of the idea to show audiences what really happens behind the scenes?

D: I was certainly trying to pull the curtain back a bit. Barry Lyndon is such a beautiful and stately film but beneath that it was no different to any feature film ever made, where people need to eat, sleep and go to the toilet. The crew were still smoking cigarettes behind the camera while these glorious scenes were being shot.

Our visual effects guy helped to recreate the actual location by adding a mountain to our scene from an entirely different county.

FF: Were you able to use any original locations?

D: The plan was to film in those locations, but after entering the script into a competition, I subsequently won a small amount of money, but that money came with some rules attached. The main one being that I had to film in their county (County Offaly) where the competition had run.

I’ve been in the original fields and houses where Barry Lyndon was filmed so I do have a real sense of those places. Our visual effects guy helped to recreate the actual location by adding a mountain to our scene from an entirely different county (County Waterford).

We actually ended up shooting in the town where my parents are from, so I called in a lot of family favours. I’m related to a lot of the extras!

FF: Were the actors you worked with nervous that you might start channelling Kubrick himself?

D: No! Haha! It’s amazing that Kubrick got away with what he did, but I suppose that’s because he was a genius.

We knew that we only had four days to shoot on locations, with some other scenes shot in a studio in Shepperton. There was no room for me to do more than two takes, let alone ninety! We shot in December so it was freezing cold; it was dark early. The compromises that came from that pressure and those restrictions, that’s where the good stuff came out. But we also had a lot of favours and goodwill that led to such warmth ending up on screen.

My personal favourite (reference) is a tiny little detail and is so self-indulgent.

FF: I wanted to ask you about the references in Kubrick by Candlelight. It’s been said that you squeezed ninety individual references to Kubrick’s work into the film! Why?

D: It was part self-challenge and part tribute. Some of them were deliberate, some just a result of blind luck. The first five or six credits are made in the fonts from different Kubrick films and the final frame of my film mirrors the end of Barry Lyndon. There are certain ones that are so fleeting and so well hidden that there’s no way a viewer could spot them; so yes, those ones were for us!

My personal favourite is a tiny little detail and is so self-indulgent. Our visual effects guy helped to recreate the actual location by adding a mountain to our scene from an entirely different county Paddy, the visual effects guy, digitally altered a registration plate on a car to read OPE114.

I am going to type a full list at some point, because even I’ve forgotten a lot!

D: We’ve entered Kubrick by Candlelight into a number of festivals, and it’s won a few awards. In August and September it’s being shown at some festivals in the U.S.A., so that’s really encouraging.

I’m working on a small feature set in the 1980s about a dance troupe, called Hot Socks. It’s shaping up to be the Fully Monty meets Pan’s People.

I’m also very much writing the feature film of Kubrick by Candlelight. If I could have made a ninety minute film instead of a short, I really would have.

FF: Thanks a lot for your time, David.

And featuring Brian Cox as The Narrator.

You can read the Flickfeast review of Kubrick by Candlelight right here.