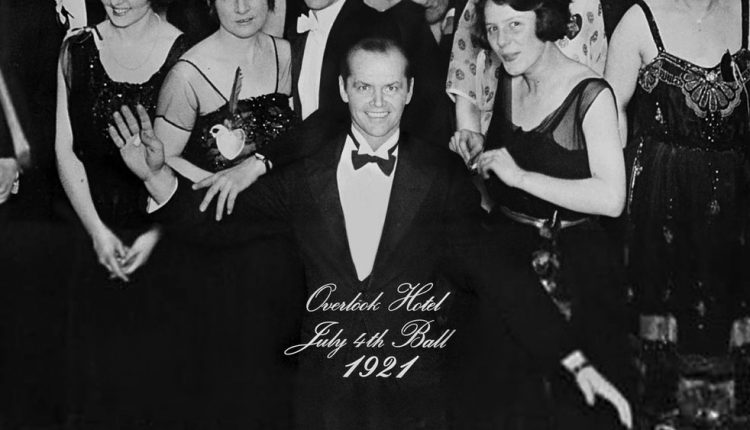 Stanley Kubrick’s work has been influential on any number of filmmakers who followed in his stead. The costumes, set design, cinematography and iconography of films like A Clockwork Orange and 2001 have also been echoed, remixed or otherwise replicated in music, art, comic books, and myriad other forms. Impressive though this reach is, it’s trumped by the fact that a single scene in The Shining has inspired an entire genre.

The last scene, no less! John Alcott’s camera dollies through the now-empty hallways of the Overlook Hotel, towards a set of photos in The Gold Room where Jack Torrance (Jack Nicholson) fell under the influence of the malignant spirits haunting the mountaintop resort’s old ballroom.

The camera continues to push in, further and further, to the image of Jack incongruously, impossibly presiding over a crowd of flappers and tux-clad men at the Overlook’s July 4th Ball…in 1921.

It’s a confounding, illogical final moment which nonetheless has an ineffably haunting quality to it. There’s no “explaining” it. It certainly echoes Delbert Grady’s assertion that, despite having only arrived this off-season, Jack has “always been the caretaker” at the Overlook. It also implies some cyclical violent force within the hotel, or perhaps of Jack’s corrupted soul being trapped within the beams and stylish shag carpets along with the rest of the July 4th party.

This scene in particular inspired the philosophical concept of “hauntology,” or a “nostalgia for lost futures.” Musician James Kirby adopted the stage name ‘The Caretaker’ and has since produced hours of material which raids old twenties standards and applies an eerie, distant echo effect, similar to the use of Al Bowlly’s “Midnight, The Stars And You” here.

Even Life on Mars, according to writer Mark Fisher, had something of The Shining’s final scene in the way it conflates the present and a half-remembered past into an uncanny, often creepy corruption of reality.

Watching the scene, even in isolation, it’s not hard to see how its inspiration has continued, even in its seeming simplicity and ontological impossibility. Where most horror films cannot resist the urge to over-explain, or somehow gild the lily, in its final furlong, Kubrick understands how to leave his last image echoing in your memory like Bowlly’s voice through the Overlook’s empty (or perhaps not so empty…) halls.