The French time-travel yarn Les Visiteurs (1993) – sometimes called The Visitors in English  and not to be confused with the American remake, called Just Visiting (which is also reviewed further down this page) – ranks in my top-5 of all-time favorite fantasy movies, right after titles like Highlander (1986), Ladyhawke (1985) and Legend (also 1985). It is a movie I have watched over and over again on a video tape recorded from TV, where the Danish subtitles were much better than the amateurish ones on the Danish DVD release I also own (and have most recently seen). So far as I am aware, the movie is not out on an English-subtitled Blu-ray yet, but I am first in line to get it when it becomes available.

Jean Reno plays Godefroy de Papincourt, Comte de Montmirail, a knight from 1123 A.D., smack-dab in the prime of the age of chivalry. His oppressed but (mostly) faithful peasant page, Jacquouille, is played by Christian Clavier (who later played Asterix), a brilliant comical talent who also co-wrote the screenplay. As the story opens, Godefroy does a great service to the French king, and is awarded the right to marry Frenegonde, a noblewoman who is already in love with him. However, a witch makes Godefroy see Frenegonde’s father as a bear, and he grabs his crossbow and kills the bear, i.e. Frenegonde’s father. Frenegonde cannot marry the man who killed her father, and she becomes a nun, while the deeply repentant Godefroy promises never to take another wife. Fortunately, a kindly wizard comes along who offers to bring Godefroy back in time so he can kill the witch instead of his bride’s father, and undo the calamity. As Godefroy and his page Jacquouille goes through with the ritual, the wizard suddenly realizes that he forgot an important ingredient in the magical potion, but too late. Godefroy and Jacquouille are lost in time.

Of course, they reappear in 1993. And if ever there was a time to say “wackiness ensues”, this is it! They quickly arrive at the house of Godefroy’s descendants, who have leased their old castle to Jacquouille’s descendant, Jacques-Henri (also played by Christian Clavier), who is using it as a hotel. Godefroy and Jacquouille have to make sense of the modern world while finding out how to get back home, and this is a wonderful opportunity for an endless parade of comical hijinks. The class difference between Godefroy (a noble knight, and acting the part) and Jacquouille (a lowly peasant) is an on-going theme rife with laughs, and it is thrown into sharp relief by the way their respective descendants have risen and fallen in comparison: Godefroy’s kin are now upper middle-class (part of the bourgeoisie, essentially – rather lower than the aristocracy), while Jacquouille’s descendant is nouveau riche. Everyone gets a chance to be shocked, inspired and outraged over these developments. It’s a scream.

The characters, while outrageously hilarious, also ring true as genuine and believable personalities in the context of their own time, and their reactions as they reach the modern day are eminently logical (for them). In fact, although you’d think modern people were far more endowed with a sense of what is real and rational than people from the high middle-ages, it is in fact our two medieval heroes who understand what is going on, while nobody from the modern day does. I love that. The believability and reality of the characters is also what so many American movies so often fail to achieve.

Anyway, the modern romp of the two medievalists is wrapped up nicely, and the complex yet seemingly effortlessly executed plot crammed with great gags makes for an immensely enjoyable experience. A great genre classic, this should be on the watchlist of any fan of time-travel movies – even if it is fantasy rather than science fiction.

The French sequel to Les Visiteurs is called, in English translation, The Corridors of Time. It is a direct sequel, following on straight from the end of the first movie (despite the former being made five years earlier). Jacquouille had stolen some jewels from Frenegonde’s father, and their absence now threatens to suck her father into a sort of temporal black hole. So more time-travel is necessary in order to put things right.

While the first movie only started and ended in the past, the long middle taking place in the present, the second movie switches back and forth between the past and the present a lot. Confusion reigns as to who are really from when, and some of the wrong people are sent back in time, and, of course, back to the future (the soundtrack even riffs the theme from Back to the Future on three or four not-so-subtle occasions).

Part of the story revolves around the immediate family of Godefroy’s modern-day descendant, Hube. While Frenegonde is Hube’s cousin, we are now introduced to his wife and daughter. Hube himself has been missing for 20 years, so it causes quite a stir when Godefroy appears, and everyone naturally think he is Hube. Frenegonde herself, in the first movie, assumed the same, but in the sequel she has come to realize that Godefroy is her time-travelling ancestor, and she takes it upon herself to make sure he and Jacquouille are returned to their own time. Which is very, very difficult.

The plot is a bit of a stretch, and while the overall acting and directing are quite on par with the original movie, sadly a lot of the same gags are merely repeated, with some extra not-terribly-good-ones added that have little or no plot-furthering function. Several of the time-travel shenanigans don’t really accomplish anything for the plot, either, which makes the story a rather hollow affair.

The worst thing about this sequel is that the great Valérie Lemercier (a brunette), who played Frenegonde in the original movie, is the only major cast member who does not return in the sequel. She is replaced by redhead comedienne Muriel Robin, who does a decent job, and nails the comedy very well, but looks completely different, which is really a very disturbing element in the overall mix, considering how pivotal her role is.

The best thing about the sequel is also the best thing about the original, namely the performance of Jean Reno. Apart from Enzo in The Big Blue, I feel that Godefroy is Reno’s strongest character portrayal. He is amazingly convincing as the 11th century aristocrat warrior who relishes in all the appallingly oppressive and uncivilized conventions of his native era and yet is a noble and chivalrous hero whose priorities are never in doubt. As long as Reno is on-screen, there’s certainly nothing wrong with the entertainment value.

My Danish DVD release of this sequel is bare-bones, and the subtitles are not enormously clear, but adequate. 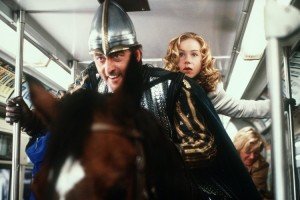 How many American remakes of French movies actually star the same French actors who starred in the original? Not a lot! So that’s one thing, for a start, that makes Just Visiting different from other U.S. remakes. Jean Reno and Christian Clavier reprise their roles from Les Visiteurs (1993) as knight and man-servant in this American version, and the original French director was also kept onboard. The script is by Clavier, director Poiré and (!) John Hughes, ensuring a smooth transition to a time-honored American style of comedy.

The basic story is very much like in the original movie, although there are several important changes, including the names of the characters. Here, Jean Reno plays count (and duke) Thibault of Malfete, and his servant’s name is André. In his native age of chivalry, Thibault is about to marry Princess Rosalind (blonde Christina Applegate in what is probably my favorite performance of hers), daughter to the king and queen of England. Not a bad way to explain how everything is suddenly in English (although, historically it makes no sense, as the English language did not yet exist in the high middle-ages). Malcolm McDowell appears as the wizard in a slightly larger role than in the original, where he himself travels to the present, and gets the materials for the time-travelling potion in a scientific supplies shop, thus making this movie just as much science fiction as fantasy.

The present-day setting is Chicago, where Thibault’s descendant Julia Malfete is organizing a medieval exhibit at a museum – this is where our time-lost knight and man-servant find themselves. Julia grows increasingly sympathetic to their story, and gradually gets her life back in order after having been under the control of her greedy, cheating and domineering boyfriend, Hunter (played by talented Matt Ross, now known mainly as Albie in the TV show Big Love).

If, like me, you enjoy the story and the actors, this remake is very entertaining and never gets boring. It does repeat some of the gags from the original movie, but not as many as the French sequel does, and in a way that seems fresher. The overall story is simplified a great deal (and the runtime is shorter), but all the essential elements of the original are here in some form, and the style of comedy is a successful mix between that of the original and that of a classic John Hughes movie. It also has a number of CGI scenes that are very good for its time.

My Danish release of this DVD has no extras except a trailer, but it has subtitles in ten languages, and unlike the subs of the original movie, the ones on this one are pretty good.

Attack of the Adult Babies (2018) Review