As usual this year, the London Film Festival has provided an immense programme of big films, big name directors and the usual cavalcade of stars attending its premiers and gala screenings. However, while all of this is going on, there is an oft overlooked element to the festival, and that is the once again packed programme of short films on offer. As with the main programme, these are broken down into thematically related packages and offer a great mixture of established names and stars and up-and-coming directors and actors; some funded by various Film Funds, some student films and some self-produced. Over the next week or so I shall be taking a look at some of these short films. Here is the first batch.

A very funny “slice-of-life/time” film about a family heading to London on the train. Over the course of the 9 minutes of the films there are moments of anger, joy, sadness, laughter and remorse. We are dropped into the train carriage via a stationery camera, locked onto the seats and table at which sit a husband, his pregnant wife and their two children. They bicker, they argue, they laugh about the state of their relationship and over the course of a mundane train ride they alter the state of their relationship. They eat rubbishy rolls.

For a film that tries to squeeze an awful lot of emotions and family dynamic into 9 minutes, Bradford – Halifax – London succeeds; mostly, I feel, because the naturalistic acting, realistic script and Lee’s refusal to give in to attempted, flashy camera trickery (the film is a single take) keep things believable.

A simple film (which simplicity is deliberate, the film being shot according to a small set of Dogme-like rules dictating camera type and placement etc), but a funny and accomplished one. Bradford – Halifax – London has already won awards at Cinerall International Film Festival and has screened at numerous Academy Award and Bafta qualifying Festivals.

This is a beautifully animated film (no surprise considering that Tsutsumi has worked with both Blue Sky and Pixar), with an affecting story and a strong message about acceptance, trust and friendship. I’m assuming the message is what has put this film into the family category, because everything else about it, though beautiful, is pretty abstract, bleak and harrowing.

The story is about a little pig, whose name we are never given, whose job it is to attend to the windmill near the damn that overlooks the little village. The purpose of the windmill, it seems, is to keep the blackness away, and in order that this happen the pig must keep to a very strict routine. When he is not attending to the windmill, the little pig is being picked on and generally ill-treated by the other little animals in the village; that is, until one day a little fox with artistic sensibilities joins the group and befriends our little piggy. All is not well, however, and due to a misunderstanding the little pig thinks he’s due a falling-out with the fox. And all the while the windmill is being neglected. On purpose, perhaps?

What follows is a fantastically dark little parable about the role of trust in friendship and its potential slide into anger and destruction. This film has the look and feel of a children’s program from 70s television, and the style of the film, coupled with the strong plot and levels of meaning, make The Dam Keeper a first-class entertainment. 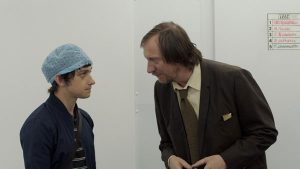 Sunday Roast is a peculiar film indeed. Written by and starring David Thewlis, it is an immensely dark, immensely funny, utterly foul-mouthed, crudely violent and even downright horrid little film. It is a fantastic one though.

Craig Roberts (Submarine) is a young theatre actor told by his director that in order to more fully inhabit his character, he should pay a visit to the local morgue to better come to terms with death and its lingering emotional impact (most visible on the face and in the voice and actions of Thewlis’ terrifically terrifying mortician.) Upon his arrival we already get the impression that there is something a little unwholesome about the morgue, and this is only confirmed to us when he meets Thewlis, and the back and forth between the two of them starts of amicably enough but soon descends into a lesson that Roberts would not receive. Amidst the torrent of extreme foul language (that though pervasive, never feels gratuitous) and usual morgue movie gags (a scotch egg placed on a shiny metal surface) we learn that Thewlis’ mortician has a lot of unresolved issues, with himself, with actors, with the corpses he deals with, with life in general.

After a traumatic few minutes, things get out of hand very quickly and the film ends on a very bleak, surprising and ambivalent note. Sunday Roast is fantastically well acted (it’s not every short film can boast a couple of leads of this calibre) and oozing (literally at one point) with atmosphere and grime. And though not for all tastes and certainly not for children, I think Sunday Roast will garner quite a bit of attention. 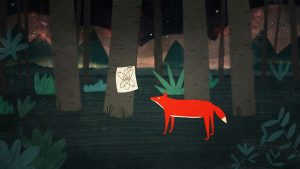 Lastly, this strange, surreal little animation from German animator Reka Bucsi, a graduate of MOME (the Moholy-Nagy University of Art and Design) in Budapest. Symphony NO.42 is a collection of 47 bizarre, interconnected little vignettes, animated in a detailed though naïve style, transposing human interrelations onto animals. The forest is a recurring locale in Symphony NO.42, though here it offers no respite or peaceful reclusion; instead, it is the ground where all the lovely and terrible things we do to each other as human beings are re-enacted by dogs, dolphins, foxes, polar bears and others. This anthropomorphization [sic] lends the film an eerie quality, and it is very easy to see past some of the slapstick humour and be drawn into the surreal world Bucsi creates, wherein every action has an [unexpected – usually] reaction. I found myself laughing out loud one moment, slightly shocked the next, always waiting for the next segment to see what bizarre wonders follow.

On the surface Symphony NO.42 looks at first to be a sketch-comedy type show along the lines of Modern Toss or even, if we want to be a little harsh, something like Robot Chicken. It is more than that though, much more. It does that rare thing, which is to make you laugh, and then make you wonder and care just why you laughed. It’s odd and hilarious and jarring and relaxing all at the same time.

Symphony NO.42 has already screened as an official selection at the Academy Award qualifying Nashville Film Festival.

Each of the four films above will be showing at The BFI London Film Festival along with their whole Shorts packages.