For our second round-up of short films at this year’s BFI London Film Festival we have two from England, one from Finland and one from Germany; an action-comedy, a documentary, a family drama and an experimental film-essay about…I’m not really sure. The two British films were produced and part-funded by Film London, as are the other five shorts in the London Calling package. Film London is a non-profit production, funding and support body set up in order to encourage and facilitate film-making in and of and about the city of London. They provide funding and mentorship to, mostly, first-time film-makers, and have had much success. Working with the BFI and The Arts Council, Film London’s past short films at the Festival, such as 2013’s The Field by Jones and Orr which won the jury prize, show that London film is alive and well and living in Shoreditch.

The astonishing thing about all of the short films this year is the consistently top-notch quality of their production. I suppose this makes sense as more and more film-makers have access to better quality equipment, but I think it might also be down to the overall higher esteem given to festival entries not supported by massive names or studios, and this manifests itself in more support, higher budgets and better trained, more willing and knowledgeable film-makers. 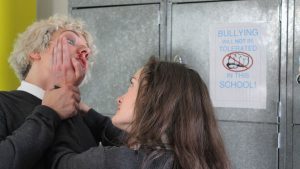 Throwing every action film cliché that 14 minutes allows at the screen, 7.2 is a really funny, well acted, well-shot story that relies very much on the audience’s knowledge of blockbuster action tropes for its effect.

Beginning very much like Oldboy, a schoolgirl, Cleo, awakes with amnesia somewhere in the school and is given only the cryptic instructions to obtain something from a schoolboy named Pemulus and deliver it to the library by midday in order to spare herself disembowelment. Travelling upwards through the various levels of the school as one would a building in a computer game (or a film like The Raid for instance) in a race against time, Cleo meets up with her best friend Mar, dispatches a violent prefect named Candy in the first of the films well-staged and rather brutal fight scenes and partakes in a Matrix-like journey through the boy’s level using only Mar’s instructions delivered via mobile phone. All of this leads to (as all good action films should) a very well choreographed final show-down.

There is an awful lot of action crammed into the 14 minutes of 7.2 and all of the set pieces and references are pulled off with aplomb, the film comes across as a mash-up of The Inbetweeners, Die Hard and a Bourne film. The acting is superb, the film looks the part (It was shot by Susanne Salavati on a Red Epic) and despite it’s very many elements, comes together fantastically. 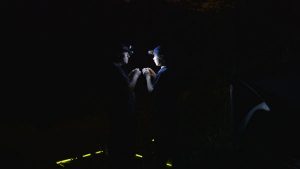 Across Still Water is a very serenely told, very assuredly shot documentary about a young man, John, in his early 30s who is afflicted by Retinitis Pigmentosa (an incurable degenerative condition) and is slowly going blind. With no narration, we watch as John slowly has to come to terms with his condition through the help of his mother (who urges him to either begin cane training or get a Guide Dog), a blind man he speaks to in the pub (who tells him about all the preparations he’ll need to undergo in order to live with his condition) and Ben, a young boy with whom John goes night-fishing in the the secluded lakes and woods of North London.

This is very much a film of inter-dependence and juxtapositions. The very subtly shot scenes of Ben and John fishing at night in the subdued rural surroundings contrast well with the shots of the architecturally angular estate where John lives, shot during the day. At the present time it is only after dusk that John cannot see at all. During the fishing trips, we learn that with the aid of Ben and audible bite-indicators, John is a talented fisherman. John is required here too, as Ben is too young to go night fishing on his own.

Kakara (The Meaning of Love package) 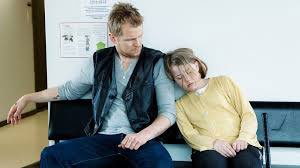 Hammarberg (played by Antti Luusuaniemi) is a bit of a ruffian, it seems. With his tattoos and his leather biker vest (though, oddly, with Crocs instead of boots) he is aggressive and angry, and when we first meet him he is taking Nessu (played by Rebecca Viitala), whom we assume to be his girlfriend to a hospital to undergo an abortion procedure. This is all told in a very matter of fact way.

Hammarberg waits outside, where he proceeds to scare the rest of the waiting patients into leaving. He seems an utterly horrible man. A young girl though, dressed up for ice-hockey and playing in the corridors is not taken aback by Hammarberg’s posturing at all. She goads him into following her downstairs to the children’s ward where the two play a little hockey, all the while Hammarberg continues his unpleasantness. Gradually though, we sense him develop a soft spot for the girl, and when he finds out that she is seriously ill, and passes out on his shoulder, he panics and calls for help. This has obviously affected him deeply and gives him pause to take stock of his own situation, hence he learns “a valuable life-lesson”; and so, it seems, does Nessu.

Kakara is well acted, well shot (again on a Red) and has a definite message to impart. This message, though, and its intentions, are set up by the director Ylakas into a small neat molehill; he then uses a sledgehammer to flatten it.

Dog People, directed by Berlin-based artists Dornieden and Monroy, is a confusing, cerebral, serious, multi-layered and alarming parable and folk-tale wrapped up as an abstract film essay.

Apparently, it is set many thousands of years in the future, and a bizarre, almost robotic voice tells the tale of The Admiral, a Cortez type figure who has discovered a new land and is obsessed with his army of gnomes and the army of Dog People in this new paradise. The film is split into chapters, each chapter title card accompanied by what look like old woodcarvings, and each chapter is made up of weird shots of dinosaurs, animals, close-ups of human skin and bizarre garden gnomes, some benign, some menacing. We even get a little snippet of news footage of Pablo Escobar, which immediately had me thinking I knew what the film was about, only to have these thoughts scuppered by what follows. As it turns out, I have absolutely no idea what this film is about, but the combination of the amazing story and the arresting visuals had me entranced for the full 25 minutes.

Gente Perra is an awesome little film, though difficult and confusing, and despite the fact that I normally shy away from experimental shorts (they are usually self-indulgent and deliberately, needlessly obtuse) I would recommend it to everybody. It has a low-fi, artist-film feel to it and yet a literary execution, like a visualisation of a Borges story, that raises it above most experimenta. Gente Perra has already won numerous awards (including “Best in festival” at the Milwaukee Underground Film Festival) and I’m sure will turn some heads at the LFF 2014.

Once again, each of the four films above will be showing at The BFI London Film Festival along with their whole Shorts packages.