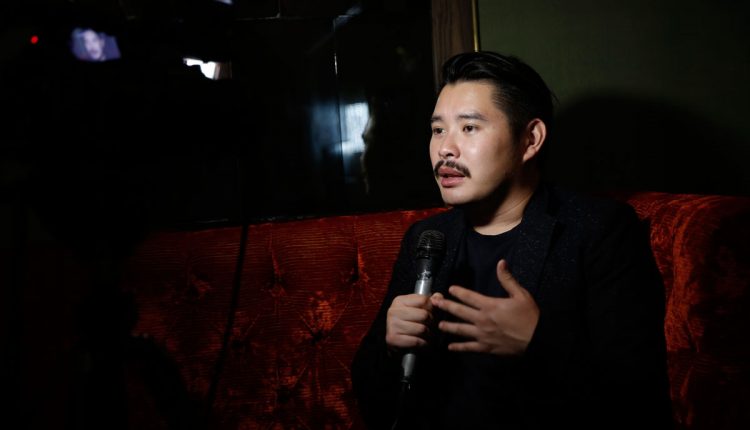 Live From New York! looks back at an American institution.  With more than 800 episodes, Saturday Night Live has endured 40 years of social and political change, giving a different take on American culture every week for millions of viewers.

Vietnamese-American filmmaker Bao Nguyen has been making documentary shorts and features since 2009, and has worked with Rolling Stone, MTV and HBO, but this is arguably his most prominent project to date.

We sit down with the director to talk about the film:

What was the concept when you realised you wanted to make a documentary about SNL?

My producers are JL Pomeroy and Tom Broecker, actually approached me with the concept before I signed on and I worked with JL in the past on a short film, and Tom is actually the costume designer on SNL.  He has been working on the show for around 20 years now, so he was our inside man to Lorne Michaels (SNL creator) and SNL.

They approached Lorne with a different take on SNL, because it’s the 40th anniversary and there have been a few documentaries in the past that have been clip shows, best of retrospectives and they wanted to look at SNL as a way to reflect American culture and society, and see its impact.  They got the approval from Lorne and they approached me, and  knowing that there’s all these documentaries about SNL, I thought it was a refreshing take on SNL that I wanted to be a part of.

Were you a big fan of the show before they approached you?

I think I share a similar story to many Americans who watch the show; I would sneak out of my room when I was nine while my parents were still sleeping.  At the time, my parents didn’t let me watch a lot of television; I came from a Vietnamese immigrant household and they would only usually let me watch the news or something like that.  I was, like, nine, and I can’t really learn about America while watching the news.

So by watching SNL late at night, I was really able to learn about what was going on in America at the time, politically and socially in terms of pop culture, and since then, I watch the show all the time, especially during election years where you watch to see what their take is on a political candidate.

So SNL broke down these issues to a level you could understand?

Exactly.  I mean,  it brings an absurd and perverted view of American current events at times, but even today, being in London right now, people get American culture through entertainment like SNL – with a show that reflects what’s going on in America each week.

It’s kind of like a finger-on-the-pulse on what’s going on and I know from my other immigrant friends that they watch SNL and they get this encapsulated view of what was going that week in America.

What was it like to go through the show’s archive footage?

Going through anything that has lasted 40 years is difficult, but when you are dealing with a comedy show, it’s a fun job to research and watch all these episodes that you’ve never watched before.

What was it like to seeing episodes featuring now well-known comedians such as Bill Murray, Dan Ackroyd and John Belushi?

It’s a bit surreal when you see a young Bill Murray or Chevy Chase and know how big they became.  The first few years of SNL were kind of an experiment, so it’s a bit rag-tag and unpolished, so watching it, for me, was quite interesting.

Especially as I was born in the 1980s’, so watching what was going on in the 1970s’ through SNL was like a time capsule or a history lesson of each week, particularly in New York.  I came of age in New York and to see what the city was like and at the time, it was quite avant-garde for American television but to see the take of these five performers was – and it was an absurdist take so it wasn’t too serious; it wouldn’t bring me down.

Themes mentioned in the documentary include sexual equality and racial discrimination.   Were these two themes you wanted to highlight?

As an Asian-American filmmaker, I’m always thinking about themes like diversity and identity, and I think SNL has definitely been part of that conversation in American media about lack of diversity.  And also, the show’s promotion of a lot of female comedians was a very particular subject that I wanted to focus on and get the thoughts from some of the most prominent comedians in America.

Everyone had different experiences with the show; it has lasted for 40 years so there’s been ups and downs in terms of when it felt more or less diverse and now, it is definitely heading in the right direction with people like Lesley Jones and Michael Che in prominent positions on the show.  Sometimes it really starts with where the talent pool is coming from, so if they’re not Asian-American comedians who are learning sketch comedy or Latino-American comedians learning comedy that SNL presents, it’ll be hard for them to be on SNL.  I think there’s been positive initiatives but there still needs a lot to change.

Watching SNL during your childhood, did it feel strange to watch racial discrimination in the 1970s’?

When I was younger and a bit more naïve, you don’t think so much about racism, I guess.  I live in a really diverse part of America, so I was lucky for that.  But if I felt more racism in my everyday life, then i’d be more cognisant when watching SNL.  It was a dream come true interviewing Chris Rock because that was during the formative years when I watched the show and he always has great insight about race and diversity in America.

Now that I have stepped back and be able to see America through a different lens and a more serious way, me watching those episodes for this project meant a lot more.  Back in the 1970s, NBC let them say the ‘N’ word on television during the famous Richard Pryor sketch and nowadays, writers wouldn’t get away with writing that.  In some ways, it’s progressive; in other ways, it’s digress – I think it’s hard to pinpoint one answer.

What will you be working on next?

I’m developing a project about Bruce Lee, actually.  It’s a project looking at him through a more intimate level, I think a lot of documentaries in the past have been very broad and interviewed people that know the myth and aura of Bruce Lee, but didn’t know him as a person.  So, it is in the same vein as Amy and Listen to Me Marlon that have been coming out in recent years, I want to deconstruct the myth of Bruce Lee.