Happy Star Wars Days(s)! As if any excuse were needed, let’s take a look at the things that we think will make the Force strong with Episode VIII.

The Knights of Ren 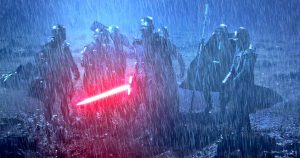 What’s better than a bad-ass Sith? A whole bunch of bad-ass Siths! So far only glimpsed in Rey’s dream/vision sequence in The Force Awakens, are The Knights of Ren the remnants of Luke’s failed trainees, now under Ren’s wing? Or something else entirely? The Last Jedi needs to give us answers.

Ren’s facial scarring at the hands of Rey’s lightsaber is already causing a kerfuffle. The Episode VIII trailer revealed that director Rian Johnson shifted it as he thought it looked too goofy. The trailer gave us a sneaky peak but the reveal promises a deadlier, darker Kylo Ren.

There was a sigh of relief during The Force Awakens when it was revealed that Snoke was in fact a 30ft hologram as opposed to a 30ft man. There’s a tale to be told of how Snoke came to power, how/if he created The First Order and how his face ended up looking like an old man’s undercarriage.

Rey Kenobi? Rey Skywalker? Rey Palpatine? The most intriguing question hanging over the new trilogy is around the identity of Rey’s rents. And why she’s naturally so handy with a lightsaber and knows her way around a Jedi mind trick. One thing’s for sure: if she’s born of the midichlorians, there will be anger.

Luke left Rey (and us) hanging at the end of The Force Awakens much to the frustration of fans but joy of meme generators everywhere. By contrast, he won’t keep it shut in the trailer for The Last Jedi. Luke winds up the trailer with, “I only know one truth. It’s time for the Jedi to end.” I preferred him when he was mute.

Luke’s search for the first Jedi Temple led him away from the battle between the Resistance and the First Order. Is whatever he finds at the temple enough to drive him further into exile? Is this what convinces him that the Jedi has to end?

The state of the Republic

Somewhat swept under the walking carpet in The Force Awakens was the destruction of the Republic at the hands of the Starkiller Base and an over-enthusiastic General Hux. More of a device for showing that the base was the Death Star Plus, the Galaxy’s turmoil at suddenly being ungoverned needs to be addressed. Where’s Ambassador Binks when you need him?

Last seen preparing to be thrown into the garbage compactor, Phasma was a disappointment to everyone who was expecting a baddie to rival Boba Fett or Darth Maul. Luckily, she’s dusted herself off in time for the Episode VIII trailer and she means business. Marching through the smoke with a squadron by her side, let’s hope we get to see her beat the poodoo out of some Resistance scum.

This one might just be a long shot, but based on the “best since The Empire Strikes Back” quotes that orbited Rogue One, a call back would retrospectively add weight to the stand alone story. What shape this could take is the interesting part, but a squad of Death Troopers led by Captain Phasma or a return to Vader’s Castle on lava-lovers paradise Mustafar wouldn’t go amiss.

The Return of the Jedi?

Reports say that we won’t be seeing that scoundrel Lando Calrissian in Ep VIII or IX and whilst that’s a huge shame, it does leave the blast door open for another return. Could we see Obi-Wan in Force ghost guise after we heard Ewan McGregor’s dulcet tones in The Force Awakens? Perhaps something to say Yoda will have about Luke’s training methods.

With Star Wars:The Last Jedi not getting it’s UK release until the 15th of December 2017 and more trailers on the horizon, there’s still plenty of time to speculate. You know, if you’re into that sort of thing.

What do you want to see in The Last Jedi? Let us know in the comments.