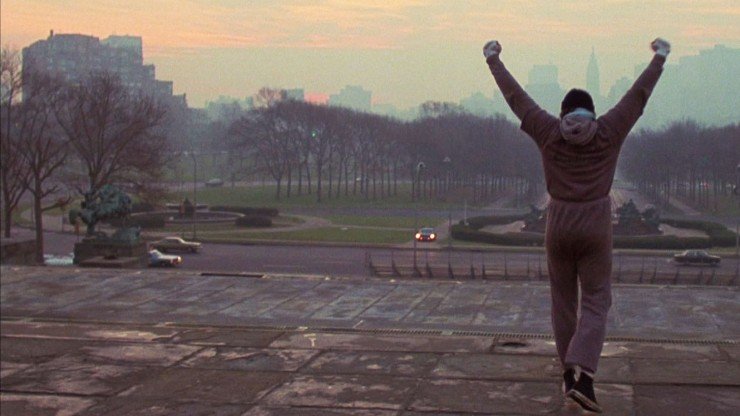 Montage: “a film editing technique in which a series of short shots are sequenced to condense space, time, and information,” says Wikipedia. And when have they ever been wrong?

The point that is lost in those cold, hard facts though, is the journey that we’re taken on through the use of montage, be it physical, emotional or intellectual. Years of toil, hardships and struggle can be condensed down into a short, sharp moment via a montage and the results on an audience can be immense. These are just a few of our favourites:

Nowadays, if one mentions the word montage, it immediately conjures images of Rocky Balboa running along a beach or up a mountain shouting “Drago.” However there was a time when montages were not soundtracked by ‘Hearts on Fire’ or ‘Eye of the Tiger’ and one of the finest examples is from 1941’s Citizen Kane.

It is a 2 minute 40 second sequence set at a dinner table that slowly shows the dissolution of the marriage between Charles Foster Kane and his first wife, Emily.

It begins with the two completely infatuated with each other and Charles phoning in sick for work so they can stay together. Slowly over the years the two become more emotionally distant as Charles’s work at the newspaper drives a wedge between them, ending with them eating breakfast silently as the camera pulls back to reveal them at opposite ends of the table.

What works so well about this particular montage is how director Orson Welles keeps Kane and Emily in the exact same positions within the frame. Subtle costume and make up changes signify the passage of time, allowing the acting to deliver the emotional impact of the scene.

The Godfather is one of cinema’s all-time classics and considered one of the greatest films ever made. Based on the eponymous novel by Mario Puzo, it saw a huge gamble in casting an unknown actor in the film’s pivotal role. When Al Pacino is introduced as war hero Michael Corleone, he is the black sheep of the family – a fact he reiterates to his girlfriend Kay (Diane Keaton). But when his family is threatened, he slowly descends into the role he never wanted.

As the director, Copolla solidifies Michael’s ruthless nature during the baptism montage, where he stands as godfather to his nephew. Pacino’s stoic performance reflects Michael’s coldness and determination to rid his enemies that have dared to cross him and his family, with the ensuing chaos and violence emphasised by Nino Rota’s powerful score.  By the time the baptism (and massacre) is finished, Michael solidifies his position as the head of the Corleone crime at the cost of his compassion, as well as paves the way for his moral downfall during the trilogy.

Say what you will about the divisive Trey Parker and Matt Stone, but as po-faced as we try to remain, they always find a way to make us break into a smile. In this case, they also sell the notion of the montage a whole lot better than we could.

2004’s Team America: World Police is written by the South Park pair and sees Broadway star Gary Johnston recruited into a crack counter-terrorism unit. As you do.

But when it comes down to the intensive training required for his mission to kill Kim Jong Il, like 24‘s Jack Bauer was fond of screaming; “there’s no time!” Cue the montage. Marksmanship, Stanislavski, wet shaving: the montage manages to cover it all.

And how’s about those lyrics?

“The hour’s approaching, just give it your best
You’ve got to reach your prime.
That’s when you need to put yourself to the test,
And show us a passage of time,
We’re gonna need a montage.”

All together now; “Montage!” Blunt though it may be, it’s on point, sharply satirical and ferociously funny to boot. By the time the montage is through, you’re left in no uncertain terms that Gary is well prepared for his mission, and that you’ll never watch a montage in the same way again.

At this point, this paragraph is going to fade out. It seems like more time has passed if you fade out…

One of the great gifts of cinema is its ability to connect.

Be it scenes, characters or themes, cinema has the extraordinary good fortune of being a medium made of cuts. Film editing is an art unto itself, and is crucial to the storytelling process.

In the case of Paul Thomas Anderson’s ensemble drama Magnolia, the editing, by Dylan Tichenor, allows us to experience a story that spans several plots and multiple characters, all distinctive, all screwed up, but, vitally, all connected.

As the story reaches its third act, Anderson pulls the boldest of bold moves and delivers a moment of connection that is both daring, beautiful and poignant. A moment in which the audience is treated to a film maker flexing his muscles.

A moment that could only exist in a cinematic form.

We start on the character of Claudia, a damaged woman with a coke habit that would make the 1970s blush. She sits, anxious, on her couch, dressed up pretty for a date she’s about to go on. She leans down and takes a line of powder, and then a melancholy piano starts to play. It’s the opening strains of singer songwriter Aimee Mann’s Wise Up. It could be playing on a radio, it could be playing in her head. It doesn’t matter.

She starts to sing along with the bittersweet lyrics.

And then the montage begins, Anderson bravely pausing his story to take a moment with each of the characters, all of whom sing along with Mann’s lyrics, as they play over the soundtrack. There’s the cop in love, the two dying fathers, the nurse, the lonely ex-tv celebrity, the lost son, the guilty wife and the emotionally vulnerable boy genius. A group of characters that, on any other night, would have nothing in common. But for one moment, they are connected. By pain. By loss. By obligations beyond their control.

Lesser film makers would illustrate such connection through lengthy dialogue, pretentious monologues that would explain everything, but destroy momentum.

Anderson knows better. Setting his audience up for the film’s bolder still, frog drenched, climax, he gets to the heart of the matter, through the power of cinema, an unforgettable example of humanity, encompassed in a mosaic of pain and hope.

Have we missed a favourite movie montage of yours? Why not tell us all about it in the comments below?