Nabat: An Interview with Elchin Musaoglu and Fatemeh Motamed Arya

The line-up at the 71st Venice International Film Festival, the oldest in the world, drew initial concern when it arrived shorn of some of the big name films many had predicted in advance. Instead, a broader and significantly more eclectic selection was put forward, which, as the festival has progressed, has provided an exciting air of discovery.

Competing in the Orrizonti Competition section is Nabat, the second feature from Azerbaijani director Elchin Musaoglu. Following the daily routine of an elderly woman who remains in her evacuated village as opposing forces draw near, Flickfeast had the opportunity to speak to Musaoglu and his critically acclaimed Iranian leading actress Fatemeh Motamed-Arya about the motivations behind Nabat, their experiences working together and their hopes for the film.

Flickfeast: Where did the idea for Nabat come from?

Elchin Musaoglu: I came across it through a TV documentary where a woman refused to leave her home when everyone else was evacuated. When asked why, she said that her deceased son and husband were still there. This was where the subject first came from. And when the Russian army came in 1991, I was making a documentary for Azerbaijan Film. I thought about this subject again where the enemy comes to the village and only one person stays. This all came back to mind before I started on Nabat.

FF: You lived in the country through the war years. How much of what we see on screen is based on your personal experience?

EM: I’ve made 50 documentaries in my country. All of them came during the war across different parts of the country. I’ve shot everywhere the war took place so my experiences come directly through this documentary making process. Because of this I saw villages before and after the war and it touched me a lot.

FF: How long have you been developing the project?

EM: 4 or 5 years ago I was talking about it and sent the subject to Azerbaijan Film. There was time spent writing it and then maybe 1 year ago everything fell into place. Then the shoot itself lasted 47 days.

FF: Was the shoot difficult?

EM: The problems came when I got back to the city, not on the shoot. Shooting in that part of the country is like paradise for me. Coming back to Baku was when the bad times started.

Fatemeh Motamed-Arya: For me as well, it was paradise. It was a primitive area and the villagers were so kind and generous really showing us the beauty of that life.

EM: We worked non-stop for 47 days with no holiday or breaks though so it was tough but we had to try and beat the snow that was on the way. Luckily, while we shot it was sunny. One of the locals said the weather is never normally like that. The moment we got back to the city, that’s when the snow came.

FF: And how did you come to be involved in the film Fatemeh?

FMA: An accident! The photographer working with Elchin was Iranian and they had seen many actresses from the region; Turkey, Azerbaijan, Kazakhstan, Tajikistan all around 70 years old. But they both thought this was too old for the physical requirements of Nabat and the photographer had seen one of my films so they came to Iran to meet me. At first, Elchin thought I was too young but we spoke for around an hour and at the end he said he was sure it was me he wanted.

FF: Nabat’s role as a mother seems to be central to the film and you’ve said before that you feel these kind of events have the biggest impact on mothers. Why is that?

EM: I didn’t want to show what actually happened during the war. It’s the before and after and the impact on the small villages that interests me. I decided my hero had to be a mother as all parts of the war have a mother involved. Mothers try so hard to protect their children and let them grow up safely. Their lives are full of hope for their children and when they lose their hope there is nothing left. During war, that hope breaks. In Azerbaijan we say that paradise is under the feet of the mother. It’s a symbol of what a mother does for her child. To show what happens in the war, you just need to show a gun and sudden violence. That is easy and can be done quickly. I wanted to show the real impact through the mother which requires more depth. 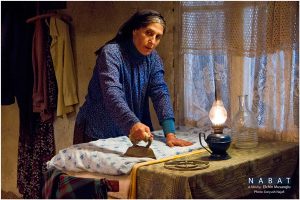 FF: The film unfolds through a series of small daily actions carried out by Nabat. How much of that was in the screenplay from the start and how much was added during filming?

EM: I have a wonderful colleague and friend who I wrote the script with, Elkhan Nabiyev. We wrote together for 6 months and added everything in including camera positions and the detail of every scene. It was all there in advance.

FF: What was it like for you as an actress with everything carefully scripted? Did you get to add anything?

FMA: Elchin has seen my movies before and knows how professional I am. I have a lot of experience so I would have ideas from time to time and he accepted them generously as he knows I’m thinking only about the role. So we did change some things. There was one hard night of shooting and they asked me to do something very difficult and I did everything but at the end I felt that it wasn’t needed and it wasn’t something I could show. I couldn’t sleep over night and neither could Elchin and in the morning he said he would change it. It’s where Nabat and her husband discuss life and the war with separate shots on separate beds talking slowly. I think it’s one of the best bits in the film. It’s really beautiful.

FF: The pace is very deliberate. Did this come from the screenplay or during filming?

EM: When we were writing we knew it had to be this way. Silence is the best route for our movie so we wanted to find a silent, calm approach that would bring out the real rhythm of the film.

FF: How did you find working together?

FMA: At the beginning, every night I went to sleep I thought I’d made a big mistake but step by step I got used to the different style of filmmaking. In Azerbaijan, they take care of the relationship with the people on set first and then start working and it really helped me settle in. I can speak Azerbaijani now but back then I had a translator and Elchin didn’t speak Persian that well so it was hard. After around a week though, we started to understand each other without needing to speak.

EM: In my case, I’m very happy to have found Motamed-Arya. I thought about the role a lot in advance and when I found her, I knew I had the right person. She’s the miracle in my movie.

FF: What are your hopes for the film?

EM: I’m not expecting the movie to stop all the war in the world but maybe it can push people to think about it. If just one person can think war needs to stop, then that is enough for me.

FMA: This is not the first movie I’ve done looking at war. I appeared in Gilaneh around 10 years ago and that talked about war. I’m sure that when you put it on film, people will think about it. I’m also sure the film will be a success and Nabat will find its place.

FF: What next for you both?

EM: I have an idea for a film about a person who is trying to find themselves and I’ve also got a documentary lined up once promotion for Nabat is complete.

FMA: This is actually my second film at the festival. I’m also in Tales in the main competition but I couldn’t make it for that as I was appearing on stage at the time. I like to keep busy though so will hopefully have plenty of work to go forward with.

Flickfeast would like to thank Elchin and Fatemeh for taking the time to speak to us. Nabat premiered at the 71st Venice International Film Festival on 5th September in the Orrizonti Competition strand.