Oklahoma Ward’s much-praised CRAWL OR DIE is to receive its UK TV premiere on Horror Channel on Fri 17 July, 10.55pm. The alien-monster shocker takes claustrophobia to new heights and depths in its futuristic depiction of a rescue mission through a maze of ever-shrinking tunnels. The undoubted star of this indie genre hit is Nicole Alonso who plays the unstoppable ‘Tank’, a mohawk-sporting warrior who’d give Arnie a run for his money.

Ahead of its eagerly-awaited showing in the UK, we spoke to the director and star, who just so happen to be real-life partners as well as running their own production company, Backyard Films.
So guys, first of all, how pleased are you that the UK’s Horror Channel are screening the film?

N: Oh, very pleased! We have gotten many UK fans asking us when/where they can see CRAWL OR DIE, I’m thrilled to finally be able to give them an answer!

O: Greatly! Since the release of CRAWL or DIE we are contacted every other day on social media by fans in the UK asking where they can see the movie. Excited that now we can proudly tell them where they can experience CRAWL or DIE! 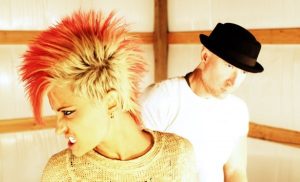 Let’s rewind…how on earth did the ‘aliens in a tunnel’ idea come about?

O: Two of some of my favourite movies scenes growing up were The Great Escape (escape tunnel digging scene) and the ALIENS scene where Bishop goes into the small metal tunnel and starts crawling – that scene terrified me! The tunnel was so small I thought if Bishop runs into one of those aliens in that small tight tunnel – he’s got no room to fight! He’s dead. I was disappointed they cut away from that scene/scenario so quickly. When I sat down to write my trilogy I started with the character of TANK first. TANK and my respect/love for her is my main focus and reason for making the trilogy. I love everything about her. I then decided – now I’m going to put/test TANK in the worst scenario I could imagine – see if she is really as tough as I wanted her to be – and that was the spark that drove the idea of combining the tunnels from both of the movies mentioned above and thrusting TANK into them.

How did you raise the finance?

O: We saved up enough money over three years by giving up a car/living in garage/going out to dinner – taking vacations etc. During that time we managed to buy a cheap broken down home – take a half year and remodel that home and sell it for a small profit. Then we started building the CRAWL or DIE set by hand. Day and night Nicole and I worked building the set by hand – which took us a year. 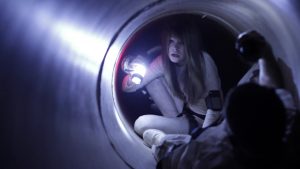 Nicole, how did you prepare for the role?

N: There was quite a bit that went into preparing to play TANK. I’d first say that I was pretty intimidated to take on the role as I am nothing like TANK in real life. I’m quite shy and reserved, so I knew it was going to take a lot of work to make this believable on my end.

I spent a lot of time in the gym – 6 days a week. I knew the role would be physically demanding and I wanted to be as prepared for that as possible.

Oklahoma Ward gave me several movies to watch and study the characters in the films to get a good idea of how he saw TANK. Most notably and most helpful were Alien (Ripley), Terminator 2 (Sarah Conner), G.I. Jane (Jordan O’Neill) and Domino (Domino Harvey). I found all these women, while tough as nails, to still be human and still be WOMEN. They had emotion and fears and struggles, but what made them badass and tough was they kept going even when things seemed hopeless.

It was very important to Oklahoma and myself that TANK wasn’t just a one dimensional character. She’s not a guy – she’s not a robot – she’s not Rambo. She definitely struggles and isn’t prepared for the situation that she is thrown into – so we wanted all that to show. Her strength comes from the fact that she refuses to give up – no matter what.

I also studied the online blogs of a few female marines to get some insight on what it’s like to be a woman in a male dominated field.

Once the set was built and I had the script – I slept in the tunnels. I lived in those tunnels and I studied the script backwards and forwards to really get into who TANK was and what she was going through as she faced this horrible situation. 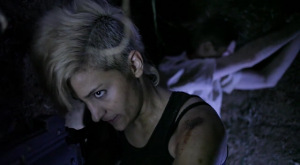 Have you got any action movie heroes/heroines?

N: Most definitely Ellen Ripley (Alien Franchise) and Sarah Conner (Terminator Franchise). Those women changed how I saw badass women in film and to this day are still my favorite. If you want a more recent reference – I really loved Furiosa in the new Mad Max: Fury Road.

O: Tons – TANK would be my first hero – other than her, Ellen Ripley takes the prize. She’s real. She’s not a superhero. She’s tough. Determined. Strong willed – like TANK in CRAWL or DIE.

It’s been dubbed ‘the most claustrophobic film ever made’. Must have been hell filming it. Tell us your own horror stories…

N: Personally I’m not claustrophobic. I used to get a kick out of seeing how small of a space I could squeeze into when playing hide and seek (dryers, cabinets, buckets, etc.). I just KNEW going in that I wouldn’t have any problem filming in the tunnels – boy was I mistaken.

All of these tunnels were REAL tunnels (approximately 40-50 feet in length) with no cut outs or escape hatches. The only way out was to crawl out or wait for 45 mins while you were cut out. The smaller the tunnels got – the more difficult it became to spend time in there. There were some days in the dirt tunnel and the smallest metal tunnel that we were in there for hours at a time. It got very claustrophobic at times and became difficult to breathe. Luckily – all the actors and crew were troopers and we didn’t have any ‘incidents’, but there were definitely multiple times I had to stop, breathe, and tell myself I was going to be ok.

O: Toughest part of filming the movie was – the tunnels were real. No escape hatches. Fifty feet long. If you got stuck you had to be cut out. Inside the tunnels were live spiders and scorpions crawling within them. That was always fun while filming. For me the toughest part of filming was near the end of the movie when only I and the actor Nicole Alonso could fit in the tunnels. The tunnels were so small it would take me thirty minutes to crawl into them – and then a battery on the camera would die and I’d have to crawl backwards out – grab a battery – crawl back in. At one point the tunnels was so small that even when I had extra batteries with me I had no room for my arms to reach back and grab them so I’d have to crawl out to put them in the camera. That was a grueling fifteen day shooting scene.

Are either of you two claustrophobic?

N: Oops, guess I jumped the gun on this with my answer above. But, no – I’m not.

O: Not at all. Although – one of my actors didn’t realise they were and by day three we had to let that actor go and find a replacement.

Are you pleased with how the film has been received?

N: Immensely pleased! Aside from filming the movie which is ALWAYS my favorite part of the process – hearing from all the fans has been the best thing ever! It’s blown my mind how much the fans and horror blogs have supported our film and gotten behind TANK! There is a hashtag on twitter called #TANKarmy and people just love this character. As an actor – there is nothing more rewarding than knowing a character you brought to life is connecting with fans. I get messages from women and men alike telling me how much TANK has inspired them in their lives, and I honestly can’t think of anything better.

O: Absolutely! To make a movie – completely independent – with our own money – no contacts in Hollywood and receive over one hundred great reviews – have a global audience and a rabid ‘TANKarmy’ fan base that write us every other day telling us how much they love TANK and the movie – really is a dream come true! It’s been a five year journey with this movie on a budget that is below poverty level and we got it done and out. Pleases me every single day. Was it tough – hell yes it was tough – but the fans writing us from all over the world – that makes all the struggle worth every second it! 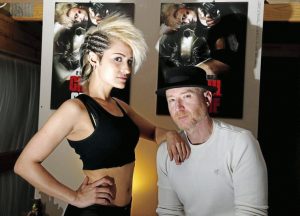 How did you two meet? Nothing mushy please…

N: HA! If you knew us – you’d know we are far from mushy, so no worries! lol. We actually met when I auditioned for Oklahoma’s first film The Isolation of Subject #136 and got a small role. We were friends and roommates for nearly 2 years before we stated dating and I must say (and here comes the mush) I haven’t found anyone else I love working with more. I respect the hell out of Oklahoma and I think he may very well be one of the most talented people I’ve ever met (and I’m not saying that because we are dating!). 😉

O: We met during an audition. Years later we ended up sharing an apartment to save on rent in L.A. We became friends. I would give her advice on people she was dating and she me. After years of friendship – we realized at the same time – we spent all our time with each other working on movies and edits of projects and just hanging out as friends. It was the day I realized she may be one of the hardest working people I had ever met that it hit me – she’s the one. Luckily – she had the same feeling – although – hey… she snores.

The End Credits tells us that ‘Tank’ will return. When?

N: Very, very soon! We are in the middle of some exciting negotiations, so we can’t officially make an announcement yet, but I promise you we will have some great news in the very near future!

O: We are looking over offers from studios and producers currently – deciding if we want to go that route or do it all ourselves again. Too many chef’s in the kitchen makes us very cautious. Either way – filming will start winter 2015.

What other projects are you both working on? Anything for FrightFest?

N: All of our focus is currently on the next step in the CRAWL OR DIE Trilogy. And I would say – yes – we’d be ecstatic to be considered for FrightFest!

O: If Fright Fest is willing to look at CRAWL or DIE 2 – you betcha’! We’d be honored!

This interview was conducted by Clout Communications for national syndication.