A favourite film score: those sounds which pull us into the screen, the compositions which haunt our commutes and the musical moments which make movies so memorable.

Feast Fam, take it away…

The Fountain is perhaps Darren Aronofsky’s (Pi, Requiem for a Dream, mother!)  most divisive film, with many claiming it to be a modern masterpiece when others describe it as pretentious with delusions of grandeur. Whatever your opinion of the film, it cannot be denied that the score is one of the most beautiful there is to hear.

In this complex story of eternal love, life and death, we are taken on a sometimes surreal and symbolic, but always emotive and thought-provoking journey across 3 time periods. As well as the performances from Hugh Jackman and Rachel Weisz, Clint Mansell’s moving score, which features the Kronos Quartet and Mogwai, acts as the bridge between the stories. It ensures the sections each have their own musical identity but are always interlaced with similar sounds of dramatic violins and an underlying post-rock edge.

The score is as dramatic and emotional as the story, mirroring the drama and majesty of Tomas’ quest for the Tree of Life and adding a hefty emotional weight in the present day, where Tom Creo struggles to accept a life without his wife Izzy. The blend of percussion and classical music, as well as the inclusion of Mogwai, crafts a sound that is interlaced with desperation and longing, while all the time feeling as magical and transcendent as the story.

Although The Fountain may not be for everyone, I challenge anyone to listen to this score and not feel like they’re being transported to another world; whether it’s one far back in the past or one even further into the future.

Similarly, Vangelis gave birth to a new style of musical score in which he similarly blended and fused genres, combining electronic synth with classic Forties-style music to create the soundtrack to this seminal vision of Los Angeles 2019.

Just as Scott’s visual style has defined so much science fiction that has followed it, so has Vangelis’ music. 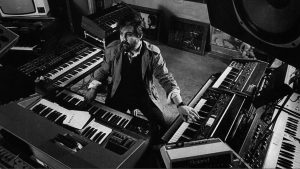 If you looked at science fiction films prior to Blade Runner, such as 2001: A Space Odyssey and Star Wars, the soundtracks were very operatic and orchestral.

Vangelis created something much more futuristic, driven by technology, that felt in keeping with the film. As evidenced by the ‘Main Titles’ cue that slowly tracks in over an industrial Los Angeles, complete with giant factories and flying cars aka Spinners.

The film’s central plot plays out like a film noir and the use of more traditional musical instruments such as the saxophone on ‘Love Theme from Blade Runner’ generates the feeling of a romance between a hard-boiled detective and femme fatale.

As fantastic as the entire soundtrack is, my favourite track has to be ‘Tears In Rain.’

It is no wonder that it was this piece of music that was referenced directly in Blade Runner 2049. Yes, Hans Zimmer and Benjamin Wallfisch created something completely different for their score but it is impossible to ignore (or forget) the original.

Such a stunning and emotional cue, it is the perfect backdrop for cinema’s finest monologue delivered so beautifully by Rutger Hauer’s Roy Batty.

To say John Williams is just a film composer is an understatement. The maestro behind some of cinema’s most memorable scores, his career has spanned more than 60 years and he is the second most-nominated individual in Academy Award history (after Walt Disney). 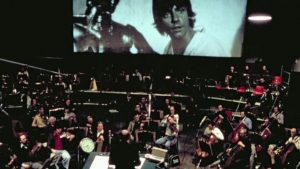 When it comes to film scores, his work on Star Wars is incomparable. Performed by the London Symphonic Orchestra, the 1977 soundtrack captures the audience’s attention as soon as the title hits the screen: the strong brass introduction that plays during the iconic slow crawl effectively builds up the tension, preparing viewers for what is going to be an epic adventure.

But Star Wars isn’t all about action and space battles – it is about bringing a new world full of new possibilities to life. When Luke stares out to Tatooine’s twin suns with The Force Theme aka ‘Binary Sunset’ lingering softly in the background, you can tell he was destined for something bigger – and that there was something past the dusty horizon.

Put simply, Star Wars wouldn’t be Star Wars without the genius that is John Williams.

Disqualified for Oscar contention due to being considered “diluted by pre-existing music,” the late Jóhann Jóhannsson never managed to replicate his previous nominations for Best Original Score. But where the inclusion of motifs from Max Richter’s achingly beautiful ‘On the Nature of Daylight’ saw the Arrival score excluded from consideration, it’s those Richter call backs themselves which contribute to its inclusion in this Feast Fam list of Favourite Film Scores. So it’s not all bad news.

The entire score seems constructed around vocal loops and modulated voices, which range from the ear piercing and otherworldly, to the gargantuan and ominous. Jóhannsson employs helium-high mechanical moans, armies of monastery chants and something that sounds suspiciously like brown noise to create a soundscape which seems comfortably claustrophobic. Thankfully, the only strain it leaves the listener with are when intently trying to decipher the ‘words’. Which, of course, you can’t. But the feels are certainly there.

This is all in keeping with Arrival‘s narrative of communication and the comprehension of our surroundings, whether abstract or tangible. By the time ‘Around The Clock News’ comes around, the swelling strings of Richter’s ‘On the Nature of Daylight’ begin to seep through, revealing the human heart within the machine. And it’s moving beyond words. So much so, that it’s enough to temporarily pull you away from the score and towards Richter’s original piece.

Is Arrival’s score one which will accompany your commute or soundtrack your Sunday lunch? Probably not. But it’s intricately detailed, acutely intimate and ultimately affecting.

As the drummer for the Red Hot Chilli Peppers during their early days, one might assume that his music tastes were years away from cinema. And yet, like Radiohead’s Johnny Greenwood, Martinez has carved out a distinctive name for himself in the cinematic musical landscape. 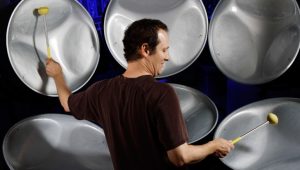 His crowning glory (so far) is his hypnotic, tonal score for Steven Soderberg’s Solaris, a retelling of the Stanislaw Lem science fiction psycho-drama, which may not have lit up the box office, despite the odd marketing choice of George Clooney’s naked ass as a studio selling point, but which, arguably, stands as the director (and composer’s) finest hour.

Visually rich and emotionally complex, the story of psychiatrist Chris Kelvin’s (Clooney) reunion with a long-dead wife, Rheya (Natasha McElhone), who may or may not be the figment of his own imagination, manifested by the ethereal planet Solaris, is the perfect marriage of material and medium: pure cinematic technique and rich, haunting audio.

Martinez drew inspiration from (amongst others) the work of György Ligeti, a Hungarian composer noted for his oddly structured note clusters and use of voices in place of instruments (his work can be heard primarily in the films of Stanley Kubrick, particularly and appropriately in 2001: A Space Odyssey).

Despite being seemingly electronic in its thrust, Martinez’s score is, in fact, all practical, albeit often played backwards to give that cyclical element that fits the narrative rug pull of the film’s final act.

It’s music to fall asleep to, make love to, lose your mind to. All elements that play a part in Soderberg’s out of this world experience, an experience that is unthinkable without Martinez’s exceptional work.

As Rheya would have it; “We don’t have to think like that anymore.”

How do our faves match up with yours? If we’ve missed a favourite film score of yours, let us know in the comments below.