We invite you to Flickfeast and Chill and get to grips with the best new shows on streaming services. This edition, Anna Scaife settles down with Netflix and Ozark Season 1. Five minutes in and she’ll give you that look…

There’s time folks. You still have a few days to settle in and smash out season 1 of Ozark, Netflix’s darkly comedic thriller series, before it makes its anticipated return to Netflix on August 31 in season 2.

Season 1 was a big hit with audiences and there’s plenty of buzz about Emmy wins in September. This show drops you straight in it, never bothering to pretend all is well. The first episode opens into the office of financial advisor, Marty Byrd (Jason Bateman), who’s meeting with clients while watching err… ‘adult’ entertainment on his laptop. Marty’s twisted family situation is revealed, as is the poisonous nest of vipers made up of Marty, his best friend and business partner, and a gang of scary drug dealers. A heads up, don’t put this show on before the kids go to bed.

Under duress, Marty makes a promise to the head of the cartel that he’ll launder half a billion dollars of drug money in order to get himself out of a sticky situation. As a result, he is forced to up sticks and swiftly move his whole family to The Ozarks (a lake region in Missouri) to try and pull off his rickety plan. Once there, he rapidly entrenches himself the criminal underworld of the resort town.

Ozark is Jason Bateman’s baby, he co-directs and stars and it’s the perfect vehicle for his sardonic one-liner style. Marty is a man making bad choice after bad choice. He’s a likeable character who gets progressively more amoral and rotten as he sinks deeper, and that’s surprisingly fun to watch. 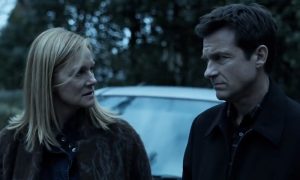 Bateman is great in it. He’s being Jason Bateman (as he is in Game Night, Horrible Bosses and so on), but the extreme circumstances and grim undertone suits him. Laura Linney plays his wife Wendy and nails the numb desperation of a person ensnared by her situation and in danger, but also desperately hanging on to the routines of daily life. Ozark is a grimy and bloody crime story, but it’s also a story about families and connection.

Ozark is often compared to Breaking Bad; both have their middle-aged white man who goes off the rails. The difference is that Marty has been laundering money for a while. He’s got form. He is not facing terminal illness, he’s just someone who’s a bit dodgy that when pushed, decides to take his criminal activity to the next level. Arguably, he’s having a few troubles at home which is playing on his mind — but it’s hardly the existential crisis that was plaguing Walter.

With slick writing, direction and performances, season one is highly watchable. I suppose it is like Breaking Bad in that you cannot imagine how much more trouble the main character can get himself into. I was more than happy to watch the first series again as prep for the next instalment of unsavoury capers and will be on the couch promptly on the 31st ready to enjoy another round. Let’s hope it doesn’t prove to be a disappointment.

For a spoiler-filled recap of the action in Ozark Season 1 watch the clip below.