Casino Royale, released in 2006 saw James Bond given a much needed reboot. Rather than signing out with style, the end of the Pierce Brosnan era in 2002 gave audiences a 40th anniversary film to forget. A leaden script and some appalling CGI left a bitter taste in the mouth of many Bond fans. Enter Daniel Craig, derided by a vocal minority when he was announced as 007, Casino Royale proved the doubters wrong and was a breath of fresh air for the franchise, giving Bond an origin story and a harder edge which saw 007 fit nicely into the post-Bourne world. Following the success of Casino Royale its sequel, Quantum of Solace, had a lot to live up to but a strike by The Writers Guild of America left producers with an incomplete script. Director Marc Forster was hired to helm the project and he along with star Daniel Craig, unable to hire a writer, set about finishing the script as they filmed. In an interview some years later Craig stated that:

“We had the bare bones of a script and then there was a writers’ strike and there was nothing we could do. We couldn’t employ a writer to finish it. I say to myself, ‘Never again’, but who knows? There was me trying to rewrite scenes—and a writer I am not.”.

In what is the first direct sequel of the Bond series, Quantum of Solace opens moments after the climax of Casino Royale with Bond driving a kidnapped Mr. White to deliver him to M for interrogation. Bond’s investigation, aided by Camille (Olga Kurylenko) then leads him to Dominic Greene, a member of Quantum. This sinister and mysterious organisation are stockpiling the water reserves of Bolivia, in order to create a monopoly. Hardly the world domination that the Bond of old had to deal with.

It is in the oblique plot that the script show its real weakness. It is evident that the film would have benefited greatly from rewrites by a professional screenwriter. The script is made doubly problematic by the direction of Forster. The action scenes are so fraught and quickly edited that they are confusing, add to that the lack of any consistent spatial geography and the action scenes become very hard to follow. It is all too easy to lose track of what is going on that the action just becomes a blur of incoherent imagery.

Another major weakness in in Dominic Greene, the film’s villain. The Bond series has been blessed with some fantastically iconic villains over the years; Robert Shaw as Red Grant, Joseph Wiseman as Dr. No and Christopher Lee jump out as great examples. It is fair to say that Dominic Greene will not be joining the pantheon of great Bond villains. Under-written and a performance from Mathieu Amalric that is best described as soft leave Greene an extremely underwhelming figure who is never really believable as an adversary to Bond.

The strength of the film lies in its characterisation of James Bond. Bond ends Casino Royale broken and confused by the betrayal and subsequent death of Vesper (Eva Green). At the start of Quantum of Solace. Bond is a cold blooded killer, he doesn’t give a seconds thought to dispatching Slate, a hit man sent to kill Camille. As he is killing him Bond looks around. uninterested in the dying man. Similarly, when Bond is reunited with Mathis (Giancarlo Giannini), his ally from Casino Royale, his reaction to Mathis’ death is to strip the body of identification and to hide it in a bin.

The experiences of Casino Royale have left Bond scarred and his only solace is in complete focus on his current mission and avenging the death of Vesper. Bond is softened in the film by Camille who is on her own course of revenge to kill General Medrano (Joaquín Cosio) who had murdered Camille’s family. Seeing how ill prepared Camille is, Bond resolves to help Camille exact her revenge. Through this Bond regains some of his humanity and by the end of the film is no longer just a cold blooded killer, hell-bent on revenge. The softening of the character re-established the origin arc of Casino Royale and we see Daniel Craig starting to become more like the 007 of old. 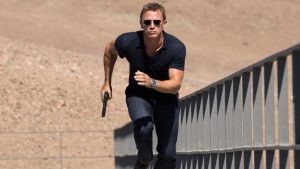 It is easy understand the reservations a lot of people have about Quantum of Solace, and on may levels it doesn’t work too well. For those who love it though, the film is about individual moments that show the foundations of the character that Bond will eventually become. Notably, not letting Greene fall to his death in the fire and not killing Vesper’s boyfriend at the end of the film. These two moments show the ‘blunt instrument’ from Casino Royale becoming a more human character. He sees that he does not need the deaths of these people for closure. Realising that his life is heading down a dark path, he stops himself and separates himself from the side of his profession that could be come too personal and damaging.

The film as a whole also works best as an epilogue to Casino Royale rather than a standalone piece.

Quantum of Solace can be seen as pretty vacuous and all flash and bang but there are some deeper themes being explored that aren’t immediately apparent because of the style of the film and the editing. The film as a whole also works best as an epilogue to Casino Royale rather than a standalone piece, which also works against it rather than being its strength.

History has been kind to some older Bond films that were not big hits on their original release; On Her Majesty’s Secret Service (1969) and The Living Daylights (1987) are now talked about as classics despite not being thought highly of upon release. For the time being Quantum of Solace remains low on many people’s list of favourite James Bond films and people like myself will continue to defend the film despite its obvious flaws. It remains a classic for me personally but it is not unthinkable that Quantum of Solace could be thought of more widely as a classic in the future.