Four features in and director/writer Alex Ross Perry has changed direction. After making his name with a series of wordy comedy/dramas, his new film, Queen of Earth, takes him into claustrophobic horror.

Starring Elisabeth Moss and Katherine Waterston, it tracks Moss’ mental breakdown over the course of a week at her friend’s lake house. Jumping to happier times a year before and full of bitter, spiky arguments, it’s an intense experience heightened by the decision to keep the camera close to Moss’ face.

Premiering at the 2015 Berlin International Film Festival, Flickfeast spoke to Alex to discuss his move into horror, the collaborative family he’s built and Moss’ involvement in the film.

Flickfeast: Why did you decide to switch genre to psychological horror after previously making dialogue driven comedy/dramas?

Alex Ross Perry: The movie was made just twelve months after Listen Up Philip so it would be hard to make the pitch convincingly to all my collaborators that I want them to come and make a smaller movie for less money and less resources but we’ll be trying to do the same thing. This was the only way to really excite them and also think myself about how to go from making a proper independent production with a crew of around fifty back to the kind of movies I made before where I only had ten people working on it who are all my friends, but still have that being a challenge. If I did another dialogue driven comedy that’s not a challenge, it’s just a bunch of frustrations to pull it off again with less.

So the whole challenge for me was to make this different and have some fun. And as long as I know that I’ll be working with my cinematographer for a fourth movie, the second movie with my editor and composer, and second movie with Elisabeth [Moss], and they’ll be as amazingly talented as I know them to be, let me just throw something else at them because I believe every one of them can nail it.

FF: So this was made in the downtime after Listen Up Philip. Were you getting something out the system or would you like to return to the horror genre?

ARP: It’s just a way to keep busy. It would have been easy to finish Listen Up Philip in January with it not getting released until October and spend those months waiting for the movie to come out assuming that when it does, everything I’ve ever wanted will come my way. Or I could use that time to write and shoot another movie which is clearly more appealing. It’s less getting it out of my system than I had to make another movie and why would I wait when the opportunity was right there. The stakes are modest enough that my livelihood I’ve worked hard to build will not disappear if this is an unmitigated disaster. Worst case scenario it just doesn’t move me forward, and best case moves me forward a little bit. There’s no way it’s going to set me back. Whereas trying to make another movie that’s very similar and not as good would be a setback.

FF: You have frequent collaborators across your films and you’ve been adding more people to this list. Do you want to keep working with these same people or might you want to mix it up a bit in the future?

ARP: There’s nothing fun about trying to find the right person and there’s everything fun about having the right person and knowing they’ll be there. I’ve had the same cinematographer for all four of my films and one of my friends who’s an actress has been in all four, either as the lead or in one scene. This sort of company is what all my heroes have had. If you look at the most prolific, influential filmmakers, the one or more movies a year heroes like Robert Altman or Woody Allen or [Rainer Werner] Fassbinder, they only pull that off as they have the group. Every movie has overlapping collaborators. If Fassbinder had to cast from scratch every time he couldn’t have made three a year, but if he can say to those same eight friends hey I need you and you’re going to be the lead this time, he can keep working. That’s the safest way to be, both productively and to challenge yourself. If you’re working with the same people, there’s no need to keep doing the same kind of work.

FF: You’ve worked with Elisabeth Moss before as you mentioned. How did Katherine Waterston come on board?

ARP: I like finding some new people. Her and Patrick Fugit; I’d work with either one of them in a second and I hope I can. For Katherine, the movie was always a lot of conversations between Elisabeth and myself and her having a producing role and taking her commitments far beyond what an actress cast in a movie would be doing.

FF: Was Elisabeth an active producer then? Not just a name to help secure financing.

ARP: I’m very vocal about making sure it’s mentioned as often as possible that the title came about because she was doing more work than an actor in a movie would be doing. When it became official she started doing even more work, reaching out to people and getting responses ten times faster than I can. It was a useful and amazing collaboration to have the lead of the movie making phone calls on behalf of the movie before its shot. It’s a lesson I hope to repeat, to let the actors be as involved as they want to be rather than you telling them how much they can be involved.

When casting Katherine, it could not be the kind of movie where I say to Elisabeth, hey look who I just met, I want to cast them. Everything would be a long conversation between the two of us. She was very involved on what the other half of the dynamic should be. Joe Swanberg [producer on Queen of Earth and prolific mumblecore director] had met with Katherine and really vouched for her as an incredibly interesting and exciting performer. So when her name came up in that usual putting a movie together way, Elisabeth was immediately interested and thought that would be exactly the dynamic they needed. And when they first met it was so exciting as Katherine is a foot taller and their colouring is different. Everything about them is different and it’s easy to imagine them being friends for some reason. 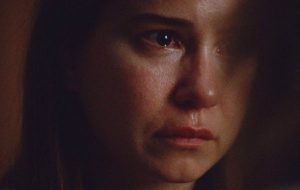 FF: In terms of their characters’ friendship, there’s clearly affection but also antagonism. Was that always there or has it grown as they’ve gone different ways in life?

ARP: In one way or another, everything I do is about characters – a few or a bunch – and the question is how did we get to this point. It looks at a time where things are as bad as they can be and the movie has to imply there was a time when things were not like this. I don’t want to make a movie about that time. I want to make a movie where people are clearly damaged and sad because that time has gone and potentially is never coming back.  It’s an ongoing fascination of mine in various different dynamics.

FF: Elisabeth’s character Catherine goes on a very stark downward spiral in the film. Do you think this would inevitably have happened at some stage in her life, or is it a result of the specific circumstances in the film?

ARP: I don’t know. That’s a question of does somebody have sickness in them or can sickness be put upon them. We see no traces of it in Catherine when we see her a year before in the film but I think there’s enough to suggest the way she had built her life was unsafe to her own mental state, and what we’re seeing in the present tense is proof of that. Whether she was the most well-adjusted person in the world or already on the edge is neither here nor there but it’s the sort of thing that’s fun to think about. For people on the way home or for Elisabeth as she’s preparing to do it.

FF: The look and sound of the film has a very 70s/80s VHS horror feel. When you were first thinking about it, did you have these images and sounds in your head or did they come from conversations with Sean Price Williams [cinematographer] and Keegan DeWitt [composer]?

ARP: I wanted to make that kind of movie. I love that kind of movie. Any big box 80s horror VHS movie is always going to be a favourite of mine. That genre is very important to me. Sean as well. As with everything we do, we don’t really have to look at things because I can say this should look like Lets Scare Jessica to Death and he’s like ok. I can also just send that stuff to Keegan, who’s much less of a nerd than Sean and I, and he gets something about the way the movie sounds which I don’t get. To me it just sounds right but to him there are layers upon layers. He sees the way a chef can taste every ingredient in a dish whereas I only taste good food.

Sending something to a guy like Keegan does that. Sean’s talent is to say if you want it to look like that with that level of enforced, distorted mania, we need this lens. I can’t look at a movie and know what lens each scene is shot on but Sean can. Knowing these elements are in place and the influences are wide ranging is the fun part of making movies. Finding the connective tissue between movies and finding how my movie can become its own thing while cherry picking from what I love.

FF: It comes back to the collaborative family you’ve been building then.

ARP: Exactly. Keegan did not work on Listen Up Philip until the movie was edited with a temp score but on this I started talking to him four months before we shot, sending him ideas and thoughts. Having that kind of relationship means the pieces can be in place and I don’t have to worry about whether the movie will be something I think is great. It makes the whole thing come together as smoothly as anyone could hope.

Flickfeast would like to thank Alex for taking the time to talk to us. Queen of Earth premiered at the Berlin International Film Festival on Saturday 7th February 2015