No, I am not one of those people who ignores sequels that they just don’t like. A) I don’t do that, and B) I really quite like Rambo (2008).

I am only looking at three Rambo movies in this particular piece because December is ’80s month and Rambo IS the action icon of that decade, surely. In fact, the character somehow became the embodiment of America for each of his cinematic outings, starting off rather reserved and resentful of what he’d been through in the past before then embracing his power and wading into enemy territories to put the world to rights. The 2008 movie may have been an admirable attempt to mix the action of the sequels with the more interesting aspects of the first movie, but it was far too late. People forgot that the first movie was called First Blood. They were all simply Rambo movies. Rambo became an ideal that many people admired. Instead of an ex-soldier only  fighting back when forced, he became the ultimate warrior. He could have won the war in Vietnam all by himself. War could still be hell, but as long as you were fighting on the right side it was a hell worth visiting.

So let’s count the clips, prime the rocket launcher, put on the blood-red headband and spend some time with Mr. John Rambo.

Sylvester Stallone is John Rambo, as if you didn’t know. He wanders into a small town, searching for an ex-comrade, and then just keeps wandering for a while after hearing that his friend passed away some time ago. With his slightly long hair and slightly scruffy clothes, he’s not the kind of vagrant cluttering up the town that Sheriff Teasle (Brian Dennehy) wants to see. In fact, the Sheriff doesn’t really want anything or anyone spoiling his territory. When he arrests Rambo and leaves him in the hands of colleagues who get a bit rough it all leads to an escalating situation that nobody could have predicted. Rambo goes on the run, people start to die and it’s only over time that Teasle realises he may have upset the wrong man. Perhaps Colonel Trautman (Richard Crenna) can help defuse the whole situation. He gave Rambo orders during wartime and he knows how the man thinks. But things aren’t the same now. Or are they?

It’s not surprising that a film as influential and well-liked as First Blood remains a great piece of entertainment today. The direction by Ted Kotcheff is solid action movie stuff, while the script (based on the novel by David Morrell, adapted for the screen by Michael Kozoll, William Sackheim and Stallone) is way better than it should be for this kind of “mindless” violence. What IS surprising is just how brilliant First Blood is. Absolutely brilliant. The finale, which includes an angry, scared, frustrated rant from Stallone, is poignant and peerless in a way that few other, if any, action movies ever manage.

Stallone is the star of the show, of course, but a) he’s not as muscular as he would become just a few years later and b) the supporting cast contains one or two real treats. Crenna is a lot of fun, and would continue to be involved in the sequels, but Dennehy makes for a very good “baddie” as he backs himself, and his men, into a corner that he then can’t get out of, at least not without losing face. There’s also solid support from Bill McKinney, Jack Starrett and a young David Caruso. 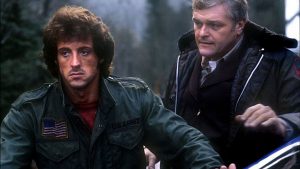 Mixing standard action beats – an exciting chase sequence in the first half is so good that I can’t believe I forgot all about it – with the thought-provoking ideas regarding how veterans are treated and what could happen when someone trained to kill, and so talented at it, is put in a fight-or-flight scenario, First Blood easily remains a modern classic. It might be easy to reference and mock, especially if you’ve not seen it in a number of years, but it’s also very easy to enjoy and recognise as superior action fare.

Things  start off well. Really well. Leading on from the events of the first movie, John Rambo has been imprisoned for years. But that doesn’t last long. His country needs him once more, and Colonel Trautman (Richard Crenna) pulls some strings to make sure that his boy can gain his freedom in exchange for one more, extremely dangerous, mission. That mission is to rescue American POWs who are still stuck in Vietnam. Doing anything by the book would bring unwanted attention to a bad situation, but sending Rambo in, alone, might be the best solution they have. If, in fact, they expect him to find ANYONE and return home.

This movie stands as the evolution of John Rambo, from the confused, dangerous super-soldier of the first movie to the ruthless warrior capable of defeating small armies (okay, he also managed that in the first movie, but each film builds more and more upon those mythical heroics).

Stallone, as well as returning to the lead role, has a hand, once again, in the scripting. This time he’s working with James Cameron, which explains why watching this movie will make your testosterone levels surge sky high. Director George P. Cosmatos keeps the camera in the right place, often enough, and does what has to be done to get the film from scene A to scene B, etc.

Charles Napier is the man in control of the mission, and therefore not to be trusted, while Steven Berkoff is the main villain, and a lot of fun in the role. Julia Nickson is a capable woman helping our hero in his dangerous quest, Martin Kove has a few minutes onscreen being enjoyably, and typically, Kove-ish, and then there are the central performances from Crenna and Stallone doubling the entertainment factor of the movie. Crenna was already tipping over into parody in the first movie, and gleefully continues with the same performance this time around, while Stallone seems to have more fun without any subtlety or moral ambiguity to wrestle with in this outing.

As inferior as it is to the first movie, Rambo: First Blood Part Two holds up as a bit of an action classic. There are many people who would rate it higher than I do, but I just wish that those involved had somehow managed to retain the complexity of the first movie, a complexity oft forgotten over the years. There are certainly beats here that look to replicate what came beforehand, but they’re simplistic and ever-so-slightly clumsy. Thankfully, those failings never add up enough to make this a bad film. It’s a very enjoyable, bullet-riddled, second serving of mega-ultra-machismo. 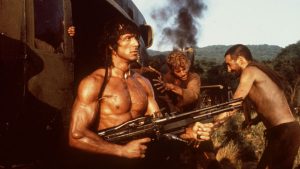 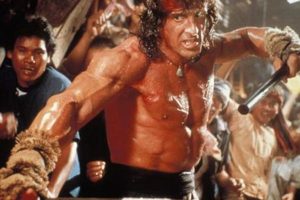 Isn’t it amazing how times change? Rambo III ends with a statement that tells viewers: “THIS FILM IS DEDICATED TO THE GALLANT PEOPLE OF AFGHANISTAN.” As incredible as it seems, the whole plot of Rambo III sees our ultimate soldier, essentially, helping the people of Afghanistan to battle against the terror of Soviet domination. It may all be kicked off by the seizure of Colonel Trautman (Crenna again, of course), but the end result is the same.

Rambo III is the weakest of the series. Stallone has already spent too much time as the character by this point, turning his actions from occasional outbursts of exceptional violence into a complete self-parody, a caricature of the excessively violent heroes who dominated the box office in this particular decade.

Stallone and, to a lesser degree, Crenna prove to be the main draw in the lead roles, once again. It’s hard to know, at this point, if their performances are supposed to be straight or if they’re aware of how ridiculous the whole thing seems at this point, with our muscular hero not getting any younger but always able to take on greater and greater enemies in each one-man war.

Stallone also co-wrote the script, with Sheldon Lettich, as he did with every instalment of the series, and as he did with his other most notable creation, Rocky Balboa (and, indeed, many of his major movies). The guy is as talented a wordsmith, in his field, as he is a charismatic and powerful lead, but you wouldn’t know it from this particular outing, which is the weakest of the franchise and feels like a redundant serving of ideas that should have been abandoned at the development stage.

Director Peter MacDonald, making his feature directorial debut, seems to have been picked for his ability to follow the script rather than any superior eye for action sequences. There’s nothing here that’s terrible, but nothing here that comes close to anything in the previous two movies, and the third act is surprisingly dull, despite all of the gunfire and an extended helicopter chase sequence.

Yet, somehow, it never becomes unwatchable. Despite the odds being stacked up to seemingly insurmountable levels and despite the serious treatment given to something so silly. Or, more accurately, because of these things. It’s sheer escapism, and Stallone has proven himself to be a master of that, again and again.

Watch and enjoy it, but I guarantee that you’ll be revisiting this one a lot less than the first two movies.