“Now, I know you.  You’re that secret agent.  That English secret agent, from England!  You’re chasing somebody.  Who you after this time boy, Commies?  Let’s go get ’em, I’m with you all the way.” 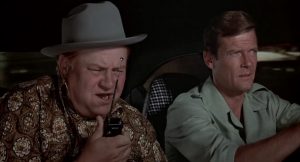 Sheriff J W Pepper’s delight at finding himself up against 007 for a second time, in The Man With The Golden Gun (1974).  Despite 100 acting credits to his name, American actor Clifton James will always be the blustering sheriff from the American deep south, in Roger Moore’s first two outings as James Bond.