Robocop: A Look Back At The Part Man, Part Machine, All Cop

Flickfeast would like to wish a belated Happy Birthday to the stone-cold classic that is Paul Verhoeven’s Robocop.

Released in 1987, Robocop had some stiff competition for the audience’s affection for the Action genre: the likes of Predator, Lethal Weapon and The Running Man took the Box Office down in a hail of bullets, witty one-liners and 80’s mullets.

But where Robocop shows its staying power is in its transcendence of the action genre due to its satirical edge which, The Running Man aside, leaves the above looking a little ‘one note.’ Although never officially a ‘Video Nasty’, Robocop’s origins for many began in the school playground, as pirated VHS tapes were traded for sweets, treats and to avoid Birthday beats, whilst the attraction was attributed to the flurry of F-Bombs, dismembered bodies and graphic drug use. To be fair, that does still sound pretty cool.

With crime in old Detroit at an all-time high, Murphy (Peter Weller’s clean-cut, blue-eyed cop) comes a cropper on his first day at the hands of some very bad men, led by Clarence Boddicker (a vicious Kurtwood Smith). Seeing an opportunity to experiment, OCP, the privatised wing of the police force, manipulates Murphy’s remains into part-man, part-machine, all cop. AKA Robocop. Thankfully, he doesn’t start to regain his old memories and go after Boddicker and Co. No…wait!

The ultra-violence is grotesque, shocking and stomach-turning, but has its tongue firmly in its cheek. Murphy himself is shot down in a blaze of gory: after losing his hand and improbably surviving a volley of shotgun blasts, a single bullet in his head finally puts him down. But like Uma Thurman in Kill Bill, sometimes a bullet in the head just ain’t enough.

Robocop himself is indicative of the 80’s: a clunky, chrome heavyweight with only a few points of articulation.

As a viewer, you’re unsure of whether to laugh or recoil at the violence and this sets the trend. One deserving henchman ploughs his truck into a vat of toxic waste and as childhood memory serves (incorrectly), ends up wearing condoms on his fingers to emulate his skin melting. Similarly to Murphy, an OCP employee is gunned down and oh-so-subtly laid to rest on a blood-soaked model of the ‘new and improved’ Detroit. Mmm…metaphors!

The glorification of gratuitous violence is just one element of what separates Robocop from its 1987 classmates: this is Verhoeven at his satirical best. Alongside the violence, capitalism, materialism and the media’s representation of gender roles are all explored and if you can get through the guts and guns, it’s ripe with relevance.

Robo himself is indicative of the 1980’s: a clunky, chrome heavyweight with only a few points of articulation. If he was an automobile, he’d only get a mile to the gallon, but damn, he’s one bad mother-crusher! But even he’s nothing compared to ED-209, arguably his brother from another mother. He’s a hulking, beast of a ‘bot, realised beautifully in stop motion. Bigger is better, right? 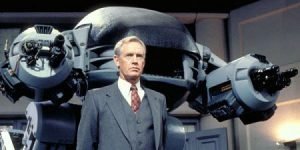 On a similar theme, the cast is a veritable ‘who’s who’ of 80’s and 90’s supporting actors: the late Miguel Ferrer (Twin Peaks, Hot Shots: Part Deux) as Bob Morton embodies greed and ambition; a stone’s throw from being a clichéd coked-up Wall Street wanker banker. Rent-a-baddy Ronny Cox (Total Recall, Beverley Hills Cop) as Dick Jones is the ruthless Senior Vice President. Twin Peaks’ Ray Wise is all bouffant, big grins and bad suits whilst Nancy Allen provides a strong female role model until, alas, she can’t turn down a glimpse at some man meat, even in a life or death situation. Hmmm…

It’s not all a state of the world address though; there’s plenty of quotes which are just plain bad-ass. Take your pick from “Dead or alive, you’re coming with me,” “Come quietly or there will be…trouble” or “Can you fly, Bobby?”

That last quote, as uttered by Boddicker before he turns his comrade into roadkill, sums up the villain perfectly: sadistic, psychotic and DGAF. In a decade full of muscle-bound Iron Curtain villains and ex-special forces mercs, Boddicker stands out as one of the most memorable: he runs the streets but looks like he runs a scout group; he snorts a Chianti as if it were coke and feminism is nothing but an F-word to him (“Bitches, leave!”). Although diminutive, he very nearly physically bests our hero and when he finally meets his maker, it’s enough to make you punch the air. How many villains can be this cool but still manage to be loathed? Don’t answer, it’s rhetorical. 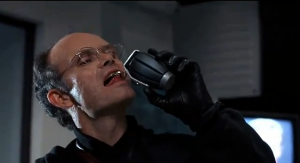 Are you still not convinced? Do you want a huge slab of anthemic synth to make up the score? You got it. Have you got a soft spot for movies that get you totes emosh? How’s about when Robocop visits his former home and reminisces on his lost life? Do you crave a dystopian depiction of the future to remind you that 2018 isn’t so bad? Your move, creep.

With all that being said, belated Happy Birthday Robo!

Phew! We managed to get through the whole thing without mentioning the remake. Damn!

Stone cold classic or 80’s pap? What are your thoughts on Robocop? Let us know in the comments below.

Original Robocop artwork created and contributed by Jamie Anderson. For more pop culture inspired art, be sure to visit his Facebook page.