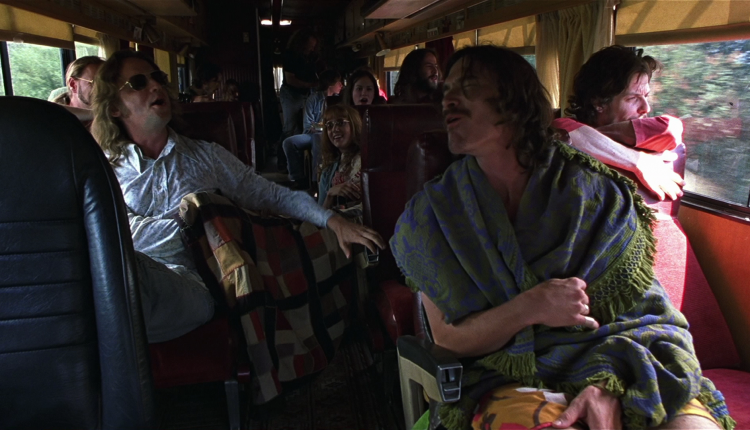 Directed by Cameron Crowe, 2000’s Almost Famous tells the story of Stillwater a fictional “mid level band struggling with their own limitations in the harsh face of stardom” through the eyes of 15 year old William Miller (Patrick Fugit), who himself harbours aspirations of a career in music journalism. After accepting an invitation to go on tour with the band, William struggles to get the key interview with front-man Russell Hammond (Billy Crudup) whose increasingly erratic behaviour brings the fractious nature of the relationships within the band to light. The band must decide what their future holds as a frustrated William tries to find an angle for his story.

The moment in question comes after Russell and William attend a post-gig party in Topeka. Russell consumes a vast amount of LSD-laden beer, culminating in him jumping from the roof of a house into a pool proclaiming himself to be a ‘golden god’. Band manager Dick Roswell (Noah Taylor) picks the duo up the following morning and Russell sheepishly climbs aboard the band’s tour bus. As he settles down into his seat the tension between band mates is palpable with William coming to a dawning realisation that he is out of his depth.

Tiny Dancer by Elton John begins to play as we are shown the band members looking despondent. Slowly the each start to nod in time with the song and the tension breaks when bassist Mark Kozelek (Larry Fellows) begins to sing along. The rest of the band then joins in. The scene perfectly highlights the fact that despite rising tensions the band remain, for the moment, a tight-knit group. William also surrenders to the moment and starts to sing along before telling ‘band aid’ Penny Lane (Kate Hudson) that he has to go home only to be told “You are home”. The film gave a new lease of life to Tiny Dancer, introducing it to a new generation. Serving to underpin the true strength of the band’s relationship and William’s surrendering to the moment this scene has become the most iconic moment from Almost Famous, one of the 2000’s finest films.

Check out the scene below.