Weddings are- usually- fantastic events for a multitude of reasons.  Some have hilarious moments worthy of £250, others have the beautiful romantic notion dreamed of in films.  And then there are the Royal weddings.  The Royal wedding has once again divided the nation- those who love the monarchy and those who don’t.  Regardless of your opinion on the Royal family or weddings, today is set to be celebrated and watched world-wide.

So, really, there was no better inspiration for this Scene Stealer.  It comes from the third of the American Pie franchise: it’s none-other than American Pie: The Wedding (2003).  There are many scenes which steal the film- the dance-off between Stifler (Seann William Scott) and Bear (Eric Allan Kramer) never fails to secure a smile nor the sense of wanting to dance so much.  The actual ceremony is also beautiful and surprising from where the franchise had begun- it was most perfectly shot and filmed. 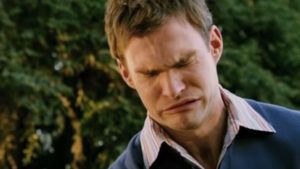 However, there is one scene in particular which has stuck in memory since watching for the first time purely based on how gross and disgusting it is.  Featuring Stifler, who is always able to screw things up, it has made me reconsider eating chocolate truffles…for life.

In all the infinite wisdom of the world, Stifler has been charged with caring for the ring, quite possibly one of the most important jobs of all.  By way of accident it is ingested by a dog and the only solution is to wait for it to arrive once more.  From the initial picking-up of the poop, to the finale of the scene (I’m not going to spoil it, purely because a retch is already on the way) this has to stand out as one of the scenes which has stolen American Pie: The Wedding.

As the scene plays out I dare you not to grimace in disgust, making the same facial expressions as Stifler.

“What do you have in your hand there?” Stilfer gets asked- inwardly we’re cringing…you just know where this is going!  Watch on to find out what happens.

Are there any scenes which you feel encompass American Wedding more?  Share your ideas in the comments below.