SPOILER ALERT: You are advised to watch the film first before reading, if you don’t want to spoil the ending.

The cult portmanteau shocker Asylum (1972) – also known under the catchier title House of Crazies – was the epitome of what the film studio Amicus churned out to great effect during the 1960s and early 1970s.  Though Hammer Films – and to a lesser degree Tyburn – had cornered the market in longer, single story, gothic horror, Amicus made a name with productions which featured a collection of short unrelated tales, held together by an overarching story arch, culminating in a frequently downbeat, surprise ending from which the unfortunate characters involved had no escape. The fifth such film which they produced – and the one often considered amongst the best – was the exquisitely moody and atmospheric Asylum. From stories penned by the master of macabre Robert Bloch, the film featured a young doctor, played by a fiercely attractive Robert Powell, in his pre Jesus of Nazareth incarnation.  As part of a job interview at a secluded mental hospital, he has to talk to four inmates, before deciding which of them is really the establishment’s head, Dr Starr, who is now locked away with the patients after having gone nuts himself. 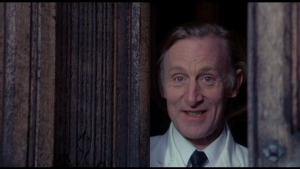 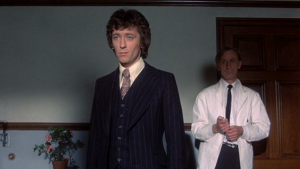 Though the separate stories – with titles like ‘Frozen Fear‘ and ‘Mannikins of Horror‘ and featuring such titans of terror as Peter Cushing and Herbert Lom – are suitably grotesque, it’s the connecting theme with Powell introduced to each patient by hospital orderly, Reynolds (a marvellously unhinged performance from character actor Geoffrey Bayldon), which remains to this day the most disturbing .  Powell’s expression of shock, during the finale, upon realising the truth behind Dr Starr’s real identity, is equalled only by Bayldon’s manic laughter as the film – and Powell’s life – draw to a grisly end.  The whole thing is enough to drive you crazy. 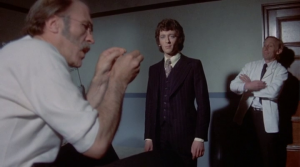 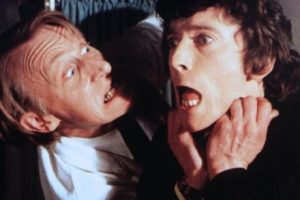 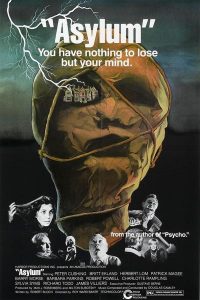