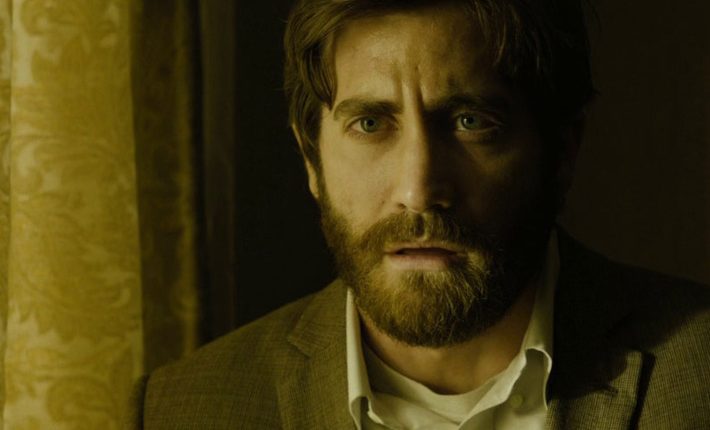 Adam (Gyllenhaal) is a college history professor, clearly stuck in a cyclical lifestyle of work-home-work-home-work-home. In class he expounds on the dangers of letting history repeat itself. Even the passionate moments with his partner Mary (Melanie Laurent) are perfunctory, mechanical, and repetitive. It seems that nothing is going to knock Adam from the circular track he continually travels on.

One evening, after reluctantly renting a DVD on the recommendation of a work colleague, Adam is manically energised by the sight of his doppelgänger appearing in the film, an actor named Anthony St. Claire

What follows is an obsessive hunt to find St. Claire and to understand his incongruous identity. After a number of awkward phone-calls and stalker-like tactics, Anthony is intrigued enough to agree to a meeting with Adam, and he may have some questionable motives of his own.

Their strange convergence takes place in a dark and shadow-filled motel room, each man reluctant to emerge into the light for fear of what new reality may be revealed. Barely any words are exchanged as the two men approach and circle each other with “Show me your hands, man” breaking the silence.

A theory is offered as to their impossible likeness and is quickly denied. Anthony’s dark plans seem to motivate him and raise his confidence while Adam, in direct contrast, begins to shrink and stutter. It’s as if his energy is being transferred into his counterpart.

The dangerous potential contained in Anthony clearly begins to scare Adam and his desperation to leave grows. He starts to retreat from the room, stumbling and fumbling, saying; “This was a bad idea. I think I made a mistake here.”

Feast your eyes on Enemy…