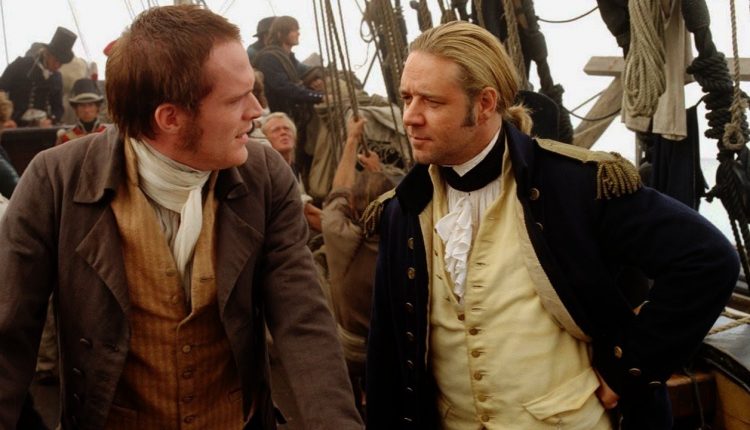 Master and Commander: The Far Side of the World (2003) is an epic war-drama film.  It contains everything.  Some prime examples: historical ideas (some of it’s facts are slightly altered such as the year), islands, Navy battles and surgeons performing self-surgery.  Oh, and Paul Bettany.  One scene in particular has left an impression on me and after 15 years is still as strongly present as the day I first witnessed it.

On paper, the scene doesn’t- shouldn’t- sound that impressive: a bunch of chaps eat dinner and talk about stories. But don’t go anywhere just yet.  To begin with, the stories told captivate the audience as well as the other characters in attendance.  The camaraderie between them is evident: keen ears and attentiveness prevail in the dark and dingy cabin.  It isn’t the stories which Capt. Jack Aubrey (Russell Crowe) recalls which steals the film, but a joke.  Perhaps it is due to the joke being so bad yet with such an amazing set-up, that it is hilarious.

After a long voyage, tough life and general day-to-day ship work, the Captain and his officers retire for their evening meal.  Aubrey regails with a story, then a short silence.  Aubrey then asks Dr. Stephen Maturin (Paul Bettany) what appears to be a very scientific question.  Prompted by this, Maturin launches into a scientific debate about which weevil he would prefer; starting with, “Neither, there’s not a scrap of difference between them.”  Undeterred, Aubrey pushes further, insisting that Maturin makes a choice.

After much deliberation, a choice is made- between the two weevils, he chooses the right-hand one for it’s “advantage in length and breadth”.  Then out of nowhere, Aubrey strikes his hand down, gently making the audience jump.

“There, I have you!  You’re completely dished!  Do you not know that in the service…”

“…one must always choose the lesser of two weevils.”

Maturin’s reaction coupled with the genuine laughter of the rest seal this scene’s fate.  Perhaps because of the unexpected nature of the joke, the reaction and even delivery, this scene has influenced my brain.  To quote a famous bank advert: Cost of a ship; a few thousand pound.  Cost of a meal; a few pound.  Cost of seeing a flummoxed doctor; priceless.

To this very day, I cannot hear the words, “…lesser of two evils.” without chuckling to myself-  Don’t you mean weevils, dear sir?

Disagree with this scene?  Do you think Master and Commander has a better scene?  Comment below.