Where do you start with Chitty Chitty Bang Bang (1968), the family musical based on the bestselling children’s novel by 007 creator Ian Fleming?  Endless scenes brim with images, dialogue and songs which have become part of every film lover’s vocabulary.  However one scene, more than any other, captures the essence of this exquisite celluloid fantasy: the segment where potty inventor Caractacus Potts (Dick Van Dyke) takes his ‘Toot Sweet’ creations – which later make his fortune – to the factory of Lord Scrumptious (James Robertson Justice) the sweet magnate, to seek his approval for their mass production.

Potts’ first encounter, in his laboratory, with Lord Scrumptious’s daughter Truly (as our banner image shows), does not augur well for their future relationship: he understandably reacts badly when she tries to explain where he’s going wrong with his confectionary, unaware that her family background may just give her the edge in the sweet making process.  Later however when he takes his sweets to the Scrumptious factory floor and shares them amongst the staff, the infectious and effervescent effect of his creation results in one of the most delightful dance sequences ever committed to celluloid.  One can’t help but sit back and marvel at the sheer exuberance and energetic fun of it all.  Oh how we wish we’d been there …… 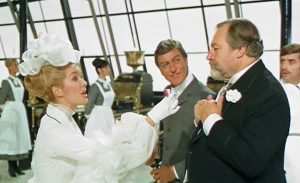 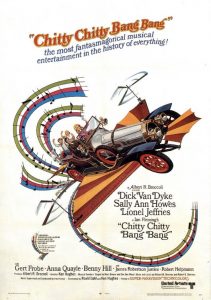