Some dialogue has become woven into the history of the silver screen.  None perhaps more than Bette Davis’ cryptic warning to her bemused house guests in All About Eve (1950), as she tells them to “fasten your seat-belts, it’s going to a bumpy night”!  The scene comes during a party Davis’ character, Margo Channing, is holding for some friends and during which – as she becomes increasingly inebriated – she proceeds to vent her anger at all present.  Revolving round the story of an ageing actress (Davis) who senses that young, talented newcomer Eve Harrington (Anne Baxter), threatens all that she has spent her career achieving, the film provided the ideal setting for some of the best situation drama to emerge during the fading days of Hollywood’s Golden Age. 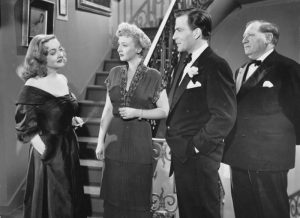 Produced by the legendary Darryl F. Zanuck, the film was nominated for a record twelve Academy Awards, winning six including Best Picture, Best Director and Best Costume Design, Black and White (for Edith Head and Charles LeMaire).  Though it featured a multitude of stars – including George Sanders, Thelma Ritter and a young Marilyn Monroe – it remains best known for one of Davis’ most famous performances, and surely one of the best caustic one-liners in film history. 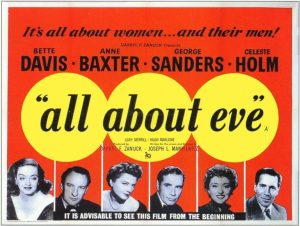