Professional hitman Vincent (Tom Cruise) hires/takes hostage stuck-in-a-rut cab driver Max (Jamie Foxx) to drive him around for a night of contract killing. After a failed escape attempt, Max is forced to grovel to a crime boss after he deliberately lost Vincent’s hit contract. Although successful, once back in the cab Max is resigned and helpless. In a rare moment of quiet stillness in downtown LA, two coyotes cross the path of Max and Vincent.

Individually, Max and Vincent both experience something unarticulated upon seeing the coyote: the hunter on the prowl; the animal thriving outside of it’s natural element; another being, similarly against the odds. The silence is broken by the haunting and heartfelt vocals of the late Chris Cornell in Audioslave’s Shadow of the Sun. It’s genuinely spine-tingling. As the chorus kicks in and ups the aggression, the sense is that the next hit will change everything. The fleeting moment of silence may have been the last. 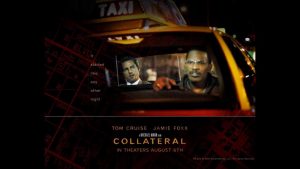