The outrageous, space ‘sex’ comedy, which is 1968’s Barbarella, is a product of its time. It could never be made now.

The camp, psychedelic, head-trip movie not only features a host of character actors and ‘hip’ young things, the likes of which don’t exist today – including Milo O’Shea, Marcel Marceau, John Phillip Law, David Hemmings and Anita Pallenberg – but here also is the film which really put Jane Fonda on a different planet from the rest of civilisation. She may have come from a family of Hollywood royalty, and already had a solid body of acting work under her belt, but Barbarella – directed by her then husband, French filmmaker Roger Vadim – made her the celluloid embodiment of every red blooded male on planet Earth. 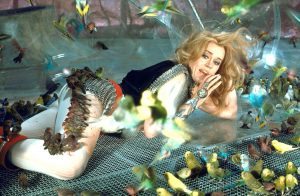 Though much of what goes on in the film – revolving mostly around Fonda having sex with as many men and (as in the case of our chosen scene) machines as possible – is close to the bone of acceptability, it’s all done with tongue so firmly planted in cheek that none of it could really be found offensive. Tracing the adventures of spaced out, Earth chick Barbarella, who makes her way around the universe where she is taught the art of love making – on Earth sex has been reduced to a form of pill popping – by virtually every male she encounters, the film is really nothing more than an excuse for Fonda to get her kit off (though always in the most subtle of ways). 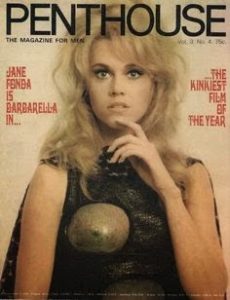 Things, of course, come to a ‘head’ when Barbarella encounters the evil Concierge (Milo O’Shea) who uses his ‘Excessive Machine’ to try and kill her by sending her into heights of ecstasy. If you’re told that the machine looks like a giant musical organ, the pipes of which work you into a state of sexual frenzy from which you eventually expire, and that the machine in the film’s home country of France was called the ‘Orgasmostron’, you will probably work out that subtlety was not Vadim’s primary aim. 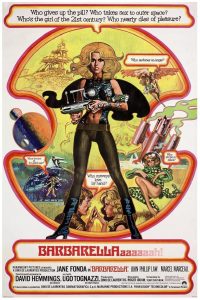