Scene Stealer: The ski jump, The Spy Who Loved Me

Looking back it seems appropriate that The Spy Who Loved Me (1977) was released in the year of Queen Elizabeth II’s Silver Jubilee, as everything about it smacks of Britishness.  Watching the film now, all the elements which had become synonymous with James Bond, came together perfectly in Roger Moore’s third outing as Ian Fleming’s legendary super spy, and the film which is considered to be amongst the best of the big screen interpretations of the suave secret agent.  Everything is there, from exotic locations – Sardinia, Egypt, the Bahamas, Switzerland and the Bay of Biscay – and beautiful women – Barbara Bach, Caroline Munro and Valerie Leon – to two of the series best baddies – Karl Stromberg (Curd Jürgens) and the legendary Jaws (Richard Kiel) – and one of it’s cheesiest one-liners: when James is about to leave following a log cabin frolic in the opening pre-credit prologue, his romantic conquest (played by actress Sue Vanner) implores him to stay, “but James, I need you”, to which he retorts, “so does England”. 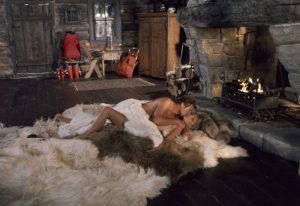 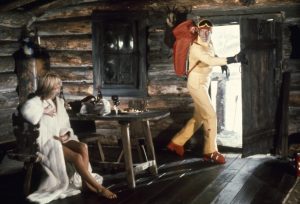 Perhaps more than this though, is what is surely one of the most spectacular Bond opening sequences ever.  Following the aforementioned post-coital sparring with his fur clad lover, Bond leaves the warmth of the Alpine cabin, only to stumble straight into an ambush with some Russian agents.  The resultant ski chase may appear tame in the light of stunts by recent Bonds like Pierce Brosnan and Daniel Craig.  However the pursuit’s culmination in a cliffside jump into apparent oblivion, must rate as one of the best surprise escapes in film history: no matter how often you see it, the fact that Bond’s backpack hides a parachute which opens into a patriotic Union Jack flag, still retains the ability to steal your breath.  Legend has it that franchise producer Cubby Broccoli was so impressed that stunt man Rick Sylvester managed the death defying jump in one take that he paid him a hefty bonus for the achievement.  Just as well as I’m sure Sylvester wouldn’t have wanted to have to ‘take two’ on that one! 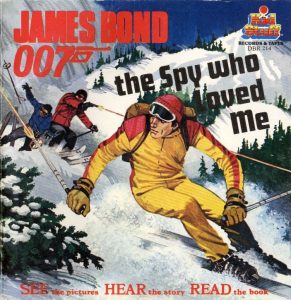 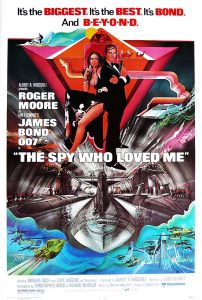