Most know Martin Scorsese for his work concerning violence or crime, often following gangsters, criminals or outcasts into compelling stories of conflict and downfall. A director with a body of work as large as Martin Scorsese’s is, often has many tones, themes, or genres that their films branch into. In preparation for the UK release of Scorsese’s highly anticipated The Wolf of Wall Street, we’ll be taking an in-depth look at the film-maker’s more under appreciated and less typical work. We’ll be starting with The Age of Innocence.

While many associate Martin Scorsese with the crime or gangster film, he also has directed numerous films that take a historical perspective, many of them could be called period dramas. Kundun, The Last Temptation of Christ, Gangs of New York, and the focus film for this spotlight, The Age of Innocence all fit into this category. These subtle, more theatrical films haven’t received the high acclaim that his edgy, aggressive films have, such as Raging Bull or Goodfellas, but nevertheless play a strong role in Scorsese’s identity as a director.

Based on Edith Wharton’s novel of the same name, The Age of Innocence is the 19th century tale of Newland Archer (Daniel Day-Lewis), an affluent, yet tame lawyer set to marry the naive May Welland (Winona Ryder). As May’s sophisticated, beautiful cousin Countess Ellen Olenska (Michelle Pfeiffer) integrates her self into the family, Newland begins to have his doubts about the life ahead of him. As the story develops, it’s revealed that Ellen was trapped in an abusive marriage, causing her to seek legal advice and emotional comfort from Newland. As mutual feelings of love develop, the rigid society of 19th century New York makes any idea of them being together impossible. 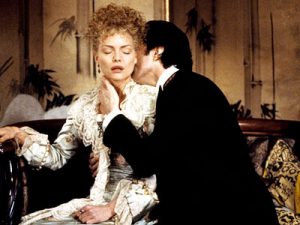 At first glance The Age of Innocence is a love story, or perhaps an anti-love story. The true emotion lies between Newland and Ellen, but any happy ending between those two is unachieved. Unlike a typical romance tale, there’s many moments of hope throughout the narrative, only to lead to a sad or bitter-sweet catharsis. A traditional story would depict more adversity, which is then overcome, leading to the expected romantic climax. Scorsese’s adaptation of The Age of Innocence isn’t overly concerned with the characters in their particularity, it’s concerned with the circumstances that imprison them. This film is more about the restrictive, bloated customs in 19th century America that restrict these two people from being together. This metaphor is enhanced by the view that Ellen is very untraditional as a woman, precisely why Newland is attracted to her. 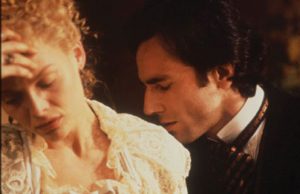 Looking at the bigger picture, it could be argued The Age of Innocence is a spiritual precursor to Scorsese’s films set later in time. One theme, or link that many of his films share, are a historical or contemporary image of New York. New York is almost a recurring character that is the setting, or focal point occurring throughout Scorsese’s filmography. The Age of Innocence outside of its own context, defines a time before these tales of violence, corruption and greed, a time of innocence, both literally and metaphorically. In terms of Scorsese’s heritage and tendencies as a film-maker, it could be heavily implied his interest in adapting Edith Wharton’s novel came mostly from its stoic, restrictive depiction of upper-society New York. 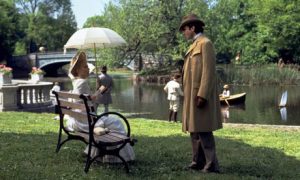 We hope you enjoyed this alternative take on one of Scorsese’s lesser appreciated, lesser known films. The Wolf of Wall Street hits cinemas in the UK 17th of January.