Flickfeast had the pleasure of sitting down with action acting legend Scott Adkins at the Fighting Spirit Film Festival in Birmingham. We picked his brain about Accident Man, his debut as Writer and Producer and why he’d be in a Wetherspoons at 9am.

Flickfeast: I’ve got to start by coming clean: I’ve not been a fan of action movies since I was a teenager with Schwarzenegger and all that kind of stuff.

Scott Adkins: You grew up too quick, mate.

I did! That’s the thing. But when I watched the Accident Man trailer, it had me hooked. It was the tone and the humour – there was more than just action going on there.

Yeah, for sure. Some of them are just “Get to the next action set piece” or “get to the next fight” and that’s alright for some people. I don’t watch a lot of the type of films that I make. You know, you get older and tastes change.

But for Accident Man, as a film that I’ve written and produced, I was able to add a bit more to it, to make it more than an action film and to add other genres and other elements in there. We just did the best that we could.

“Some of that stuff’s ripped straight out of the comic book because it was perfect how it was.” Scott Adkins

I’d say. I laughed at the trailer and I don’t laugh very often. Especially when Fallon shoots the Corsa driver and his car hits Fallon’s target. Did you try and think of the most inventive ways you could kill people in the film?

Because he goes on a revenge mission, there’s less of him at work creating accidents as there would be in the sequel, if we get to do it. So we have some more ingenious accidents planned. But he’s going around fighting a lot of people in this one, which of course, people expect from my movies. Some of that stuff’s ripped straight out of the comic book because it was perfect how it was and I just wanted to put that to the screen.

This is a passion project for you isn’t it? (Accident Man was originally published in Toxic! Magazine). Did you always want to make the comic come to life?

I always thought it would be a great film and I expected somebody would make it. But nobody did. I know now that it was optioned by a big producer and it didn’t quite work out for whatever reason. Pat Mills, the writer, told me all sorts of stories of how Hollywood wanted to change it and water it down. Just crazy ideas.

But I just loved the comic book. I thought it was great. And I love the fact that it had a hard edge and a character who really didn’t apologise for who he was. He’s an assassin and he’d kill anyone if you gave him the money for it.

“As long as the people that are after him are more despicable than him, you can get behind the lead. Even if he is an arsehole.” Scott Adkins

What’s interesting for me is to take that character, who’s as anti-heroic as it gets, and to put him in a position where you try and get the audience to root for him and get behind him. That was something I enjoyed trying to pull off. And I think we succeeded.

But personally, I like anti-heroes anyway. As long as the people that are after him are more despicable than him, you can get behind the lead. Even if he is an arsehole.

I didn’t even care about the Corsa guy to be honest.

(Laughs) Yeah! It’s funny! It makes me laugh. There’s this bit where he goes into this bar and these guys have done nothing to him, but he needs to get rid of his Post Murder Tension. They’re clearly scum and haven’t done anything to him but he just beats the shit out of them. I found that funny.

Were you thinking in your head; “Wetherspoons. 9am?”

Yeah, let’s get in there and smash the place up. Get rid of some scum! 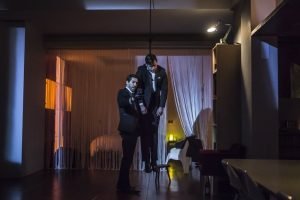 Nice! Was Accident Man’s tongue-in-cheek voiceover to help distinguish it from the usual revenge tales we see in action movies?

Fight Club is probably my favourite film and that’s full of voiceover. A lot of people say you shouldn’t have too much voiceover but I’ve always enjoyed it, whether it’s Goodfellas, Fight Club, things like that.

For me, it was “let’s go with the voiceover” and that works really well with a comic book because that’s how you read it. Of course they did that with Sin City but I wasn’t afraid to stick with it.

I just wanted Accident Man to be an entertaining film and a lot of fun. This film’s out now and people are comparing it to John Wick, Deadpool, Kingsman. I wrote this script before those films came out and it’s very much in line with the comic book. Same with Kick Ass and Kingsman – they were just doing what the comic books were doing and people were too scared to do that for a long time. “You can’t do that, it’s too adult and too edgy.” But that’s what I wanted to do, and that’s what more people are doing. Look at Logan. Look at the Deadpool films. But they’re still lot of fun and very entertaining.

It takes us back to what we were saying earlier, about people growing out of action films but films like this are bringing people full circle. Thanks for your time, Scott.

Scott Adkins’ Accident Man is available on DVD and Digital Download on April the 16th and is reviewed here.