Horror fans, for the most part, have been very excited ever since the announcement that Scream 4 was a go. The movie, released in cinemas this week (April 15th is the big day, I believe, and you can check out the trailer here), has a hell of a lot to live up to. And, with script alterations and a tame 15-certificate here in the UK, I am amongst the many who is fearing the worst but hoping for the best.

Back in the not-so-distant past, director Wes Craven provided horror fans with something new, exciting and playful in the horror genre. It looked back over the legacy of the genre and toyed with the notion of fact becoming fiction, movies warping young minds and perhaps creating killers . . . . . . . . or making killers more creative. That movie was the New Nightmare and audiences just didn’t take to it. It was a fantastic film, a dark movie that reinvented Freddy Krueger and threw him right back in with the adults, as opposed to the teens who had claimed him as one of their favourite icons.

Skip forward a number of years and the teaming up of Craven with writer Kevin Williamson managed to get things just right, taking the playfulness and post-modernism that Craven had previously attempted and mixing it in with a teen-friendly, cine-savvy cast of characters. Scream. Wes Craven may well be remembered for giving the horror genre such classics as The Last House On The Left, The Hills Have Eyes and A Nightmare On Elm Street but he has rarely (in fact, I would go so far as to say that NOBODY) provided such a perfectly crafted scene blending horror, fun and white-knuckle tension as he did when he filmed the opening scenes of Scream. And I hope people remember that when they consider whether or not to give Scream 4 a chance. It’s a franchise that hasn’t always maintained the high quality of its first film but what franchise ever does?

Anyway, for those needing a little reminder, here are the reviews of the first three movies until I run along to see Scream 4 ASAP. 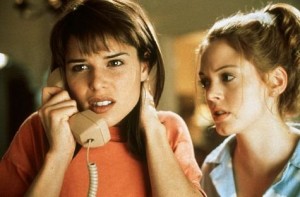 Scream. The horror movie that, for better or worse, redefined the genre in the late 90s. Directed by Wes Craven and written by Kevin Williamson, it cast such a big shadow that some people now dislike it simply because of the amount of imitators (serious and comedic) that it spawned. I think that’s really unfair because, having just revisited the film, it stands out as a masterclass in horror and a great piece of entertainment.
The story is, at its most basic, the same thing we’ve seen so many times before. A masked killer is stalking and slashing teens in the town of Woodsboro. This time around, however, there is something a little bit more sinister and cunning going on and it seems to centre around young Sidney Prescott (Neve Campbell). With more red herrings than a Russian fish factory, it’s all down to Sidney to ensure her own survival.
Scream has often been, rightly, praised for the smart, referential, post-modern script by Williamson: a horror movie world where those living through scary events are actually aware of how they should react to enable them to get through things alive (the “rules” of the genre). There’s an awful lot of fun to be had spotting the references, in-jokes and the twisting or adherence to the genre clichés and it’s this playfulness, along with Craven’s direction, that really makes the movie stand out.
Having said that, there are also many moments of genuine tension and Craven has rarely done anything more terrifying than the opening sequence; a major highlight that, arguably, helped raise Drew Barrymore’s star back into ascension.
But we shouldn’t take anything away from the fresh, largely young, cast either. Campbell is very likable in the lead role and gets to show some grit in most of her scenes, Skeet Ulrich is good in the role of her frustrated boyfriend, Rose McGowan is good fun as the protective best friend, David Arquette is amusingly inept, Courtney Cox is a cool customer, the great Henry Winkler is the great Henry Winkler and both Jamie Kennedy and Matthew Lillard are at the top of their game. In fact, rewatching this movie made me wish for the days when Lillard was doing much more than just playing Shaggy alongside a computerised Scooby Doo.
Things falter slightly in a final reel that, inevitably, ends up using some horror movie clichés while it pokes fun at many others but Craven and Williamson manage, for the most part, to pull off this particularly difficult balancing act and to provide a great, modern horror movie full of reverence for the genre while also twisting many of its conventions. 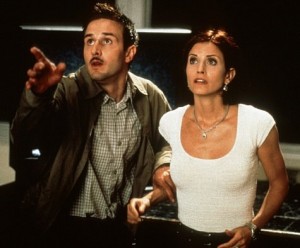 Scream 2 reunites director Wes Craven with writer Kevin Williamson and continues to supply the fun, in-jokery and thrills that the first movie provided although the law of diminishing returns should leave us forewarned that, while this is a good movie, it’s not going to be quite as good as the original.
A year has passed by and Sidney Prescott (Neve Campbell) is trying to get on with her life and forget about the events of the first movie. That proves to be quite difficult with the release of Stab, a movie based on the book of the events written by Gale Weathers (Courtney Cox). It also proves to be quite difficult when a copycat killer starts murdering people en route to, once again, the ultimate aim of Sidney’s demise. This girl is proving to be as unlucky as Laurie Strode yet she remains as plucky as ever while things build to the inevitable, bloody climax.
This time around we get a deliberation on the rules (and quality) of sequels as well as the raft of genre and general Hollywood references and gags and it’s enough to keep you having almost as much fun as you did with the first movie. Almost.
The main failings this time around include an opening sequence that can’t possibly live up to the one we received the first time around but that doesn’t help the movie by being particularly weak. Personally, I am not a big Jada Pinkett fan and found her character quite annoying therefore removing any tension there may have been. There’s also a stretching of plausibility (I know, I know, the premise of every slasher movie is far from believable anyway but . . . .) with the way certain characters manage to survive fates you thought were unavoidable.
But minor niggles aside, you get another great cast to enjoy (alongside those reprising their roles from the first movie we have turns from Sarah Michelle Gellar, the great Timothy Olyphant, the great Liev Schreiber, Jerry O’Connell, David Warner and Laurie Metcalf) and fun cameos from the likes of Heather Graham, Luke Wilson and, yes, Tori Spelling. You also get a script that fairly crackles along, with the exception of a slightly dull spell about two thirds of the way through proceedings (more to do with the unnecessary banter between Courtney Cox and David Arquette than anything else), and doesn’t disappoint those who enjoyed the first movie so much.
It’s not as good as the first film but sequels rarely are. However, it is a very, very good slasher movie from a writer and director who seem to work well together and who both know how to milk the very best out of the material. The first movie cast ripples throughout the genre in the late 90s, this sequel simply does what sequels usually do and gives us a bit more of the same only not quite as good. 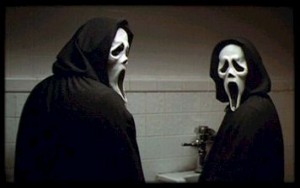 Ghostface returns as Wes Craven directs the third instalment of the Scream series which, perhaps inevitably, this time goes to Hollywood.
Stab 3 is being made and all of the actors and actresses involved are a little bit stressed out, understandably so when they realise that a killer is targeting those involved. Is this an attempt to flush Sidney Prescott (Neve Campbell reprising her role although her comparatively limited screen time makes Sid feel like a secondary character at times) out into the open or simply another excuse for a killing spree formed in the mind of a twisted psycho?
Once again, we get a pretty sharp script (though, it has to be said, not as sharp as the previous two) and a great cast (including the likes of Parker Posey, Patrick Warburton, Lance Henriksen, Emily Mortimer, Scott Foley, Heather Matarazzo and Carrie Fisher alongside recurring characters from the first two movies) but the execution, no pun intended, all feels a little bit flat and lifeless.
Wes Craven seems to have forgotten the deft hand he applied to the intelligence of the first two movies and instead ends up revelling in the excess and vapidity of this version of Hollywood. It’s still a lot of fun when poking fun at the vanity of actors and the ladder of success people aspire to climb but it feels pretty pointless and stale when it’s an unnecessary cameo from Jay and Silent Bob (Jason Mewes and Kevin Smith), for example. The balance just seems wrong here, which is a shame.
The other main problem with the movie is that it’s surprisingly bloodless and uninventive. Some of the death scenes still have some wit and tension but many others simply involve a bit of fighting, a knife slashing the air and then someone eventually getting stabbed. And repeat.
By no means is this a terrible movie but it is a poor movie for fans of the first two instalments. It worked reasonably well as a concluding chapter (which we now know that it isn’t since Scream 4 is actually upon us) and manages to entertain sporadically. But that’s all.