by Stephen Mayne
in Spotlight

It’s hardboiled romance South Korean writer/director Oh Seung-uk promises, and it’s hardboiled romance he delivers. With Kim Nam-gil, a leading man better known for his romantic roles, Oh manages to blend genres in an absorbing thriller that competed in the Un Certain Regard category at Cannes this year. Flickfeast had the opportunity to join Oh and Kim as they spoke about the mix of genres in Oh’s second film, and the success of Korean crime films internationally.

Is this the first time you have collaborated together?

Why did you decide to cast Kim?

OS-U: I like very much how he looks. In general in police movies, the detective is very energetic with a lot of masculinity but I didn’t want that to be the case in this film. I like Kim’s profile in the role and it helps to get away from the norm.

Kim is a famous actor, mostly in romantic films in Korea. Was there a concern casting him against type?

OS-U: No. I’ve seen all of his films before I cast him. I was pretty sure I could show another face of him. I was looking for that face.

Kim Nam-gil: I think every director has a desire to show another aspect of an actor. No one wants to repeat things.

You didn’t want an energetic detective in the film. What challenges does an actor face having to play such a passive character?

OS-U: When shooting, Kim prepared to not play the role too much, to not make it look like acting. It was very good.

Is it correct that the title in Korean translates directly as bastard?

OS-U: It’s quite different from bastard. There’s a lot more meanings than that. In ancient Chinese novels there’s protagonists known as Mu-Roe-Han [the Korean title] or The Shameless.

KN-G: It’s a cultural difference to say bastard and in Korea there’s a lot of ways to say that like bad man or the one without courtesy who is not kind. The Shameless combines all these expressions.

There are similarities between The Shameless and Memories of Murder but the latter is more polished and this feels minimalist. How do you think your film relates to others in the same genre? 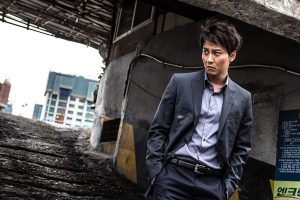 The film seems very stylised even if it’s based on real experience. What are your influences and how does the film fit into contemporary Korean cinema?

OS-U: Thank you but it’s not me who does all this. When people proposed ideas I took them and ran with them. The most important thing was having actors who understand the screenplay and I was lucky to have that.

What is it about Korean crime thrillers that allow them to travel so well internationally?

OS-U: It’s a difficult question. I ask other critics that myself. My generation of directors in Korea are indebted to Italian spaghetti westerns. That’s the reality we try to show.

KN-G: In Hollywood movies there is a huge range of subject matter but it’s much more limited in Korea. We don’t have a wide palette, we go deeper and deeper into the ones we have.

OS-U: When you’re making a film about sins, there are a lot of limits in Korean society. Talking about sins and criminals has limits but I don’t know why our generation has so much interest in cruelty. I think a lot of the sins weren’t meant to be shown in the way it happens. Some are meant to be shown in a cruel way but others aren’t.

KN-G: I don’t think it’s cruel in this film.

OS-U: I think my movie has several things that qualify as cruel. But I use a minimalist style to show this, at least in the sense that I want to use the minimal number of things to demonstrate cruelty.

Why did you decide to return to directing after a 15 year break?

OS-U: I couldn’t get investment for the movies I wanted to make. I helped out on screenplays for friends which made money. That’s how I was able to survive until now.

The Shameless premiered in the Un Certain Regard category at the 2015 Cannes Film Festival. Our review can be found here.