In what he calls ‘the age of the unsupported polemic’, Simon Schama far from dismisses an opinionated documentary style. Perhaps most famously in his most recent documentary series The Story of the Jews (2013) Schama re-animates history from a personal religious perspective. Grounding his beliefs and opinions in real synagogues, real customs, examples of art and of history, Schama authors his documentary with his own personal appreciation of beauty, condemnation of persecution, and passion for his religion.

Schama came to the 19th edition of Aldeburgh DocFest to discuss the art of the authored documentary with the BBC’s Nick Fraser, and many of his distinctive narrative attributes were analysed in great detail. How, for example, does Schama balance his polemical narrative against his historical academic narrative? How does he balance script against natural response? 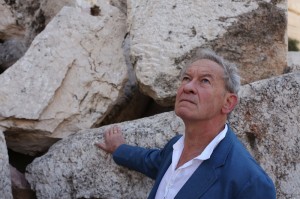 Schama explains to Nick Fraser that he likes to have creative control and often frustrates his directors by taking over the artistic execution of his documentaries. His style of presenting, he says, is a technique that he grew into over time, as his documentaries became less scripted and more organic, characterised by his natural responses to scenes and moments in history. This responsive style comes with experience, and the skill to turn what’s inside out, and to turn the past into the present.

Simon Schama has proven himself to be an incredibly versatile veteran documentary filmmaker since the 1980s, covering a range of subjects from art to religion, from history to politics. Most importantly, he is able to do so because of his profound ability to re-animate lives that are both familiar to and distant from his audiences. To make history from 1000 years ago appear as relevant as current affairs and politics suggests that Simon Schama has a certain animation about himself, that defines the character of his narrative and presentation, and, most importantly, his ability to bring history to life.