So what’s in a title? Part Deux

Like all good films (and articles, clearly) a sequel is always inevitable.  With such a plethora of films to choose from- how could there not be a sequel?  So, without further ado, read some film descriptions based solely on their titles… So what’s in a title? Part Deux. 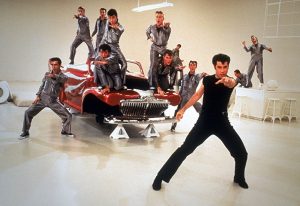 What better movie to start with than this?  After all, Paramount is celebrating Grease’s 40th anniversary- read more here.

Grease follows two high-schoolers, Danny (John Travolta) and Sandy (Oliver Newton-John), charting the beginnings of a flourishing relationship.  There’s just one problem…Danny wants to be a car mechanic and Sandy is allergic to grease.  She also likes to dance and sing- something which isn’t Danny’s scene to begin with.

The film follows both in their final year, when tensions rise, hormones peak and love blossoms in unexpected places.  To prove his love for Sandy, Danny must make the ultimate sacrifice- but can he combine smooth moves, a powerful voice and the hard work of a car mechanic? 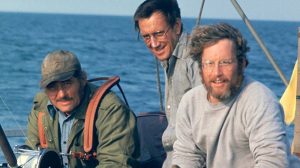 Experienced city-dwelling dentist Martin Brody (Roy Scheider) has decided to leave the hustle and bustle of New York city to move to Amity and become their local hot-shot dentist where he hopes for a quiet life beside (not in) the ocean.  Things go wrong when a patient washes up on the beach missing their canine teeth.  Brody enlists the help of junior dentist Matt Hooper (Richard Dreyfuss) and tough-as-nails seadog Quint (played beautifully by Robert Shaw) to investigate the mystery of the missing canines.  Along the way the trio learn more about themselves and the mythical Bruce than they bargained for.  They stumble upon a mayor-mafia conspiracy involving pirated teeth but will they survive and solve Amity’s most intriguing case to date? 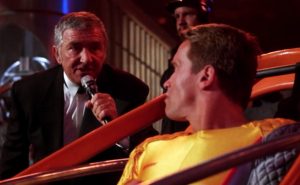 Perhaps the most health-inspiring film to come out of 1987, The Running Man is an epic, inspiring story set in the future: an overweight police officer known as The Butcher of Bakersville (Arnold Schwarzenegger) has had enough of his mundane, unhealthy lifestyle and opts for a change the only way he knows how: to participate in a TV Reality programme (they’re still a thing in the future, sadly).

The Running Man follows his journey from beef to buff and all the bits in between.  Unknown the The Butcher, ratings for the show have dropped and the host Damon Killian (Richard Dawson) has upped the steaks (ahem) and cranked the oven up to max!  Contestants will have to race against the time and “Stalkers” who will tempt them until the very end.  Will The Butcher lose his nickname or will he become this seasonings (sorry) loser? 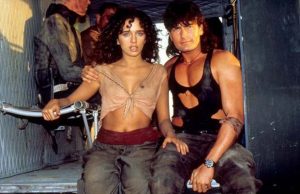 Charlie Sheen stars in this hit, laugh-a-minute comedy featuring a talented but unstable ex-soldier serving flaming sambuccas at a night club.  He must overcome the ghost of his bar-working father if he is to become the bar’s Top Gun (the best of the best bar-tenders).  Competition’s tough and the hangovers get tougher. While researching the Hot Shot (a mythical, ancient recipe for the ultimate flaming sambucca), Hopper (Sheen) shows growing psychological difficulties especially when he realises his path is that of his fathers.  Friend Ramada (Valeria Golino) attempts to convince Hopper to give up but finds herself falling deeply in love.

This is a story of honour, determination, love and the most powerful desire of all: sambucca.  Will Hopper rise above his father’s failed legacy?

That about wraps up Part Deux.  Which movie version do you prefer?  Do you have any film titles ready for debating?  Comments below.