The red carpet was rolled out at the Lighthouse Cinema in Newquay last Thursday night for the UK premiere of the film Soul Surfer. The film is based on the true story of a thirteen year old surfer, Bethany Hamilton, who was attacked by a shark in Hawaii and overcame losing her arm to get back in the water and become a pro-surfer. Her story is hugely inspirational and Newquay’s surfers and film fans came out to watch the film and catch a glimpse of the courageous 21 year old as she signed autographs and stuck around for a question and answer session after the film had been screened. 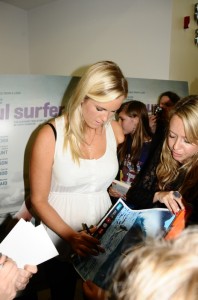 We had a few minutes with the lady herself, Bethany Hamilton, to ask her about her involvement and thoughts on the film.

Flickfeast: How did the film come about?
Bethany Hamilton: Well I guess it started in 2004 when I wrote my book Soul Surfer and then my family and I produced Heart of a Soul Surfer (2007) which is my documentary. Those did pretty good and then my manager at the time threw out the idea that this should be a feature film and we were like yep sure ok maybe that will never happen. We all thought it was a good idea and that it could happen. So the next few years after that was spent working on it and then finally a couple of years ago everything started falling into place. We met with the director Sean McNamara, who’s amazing and really this down to earth, awesome guy that was very passionate to keep the story truthful and wanted us to be a part of making the film. So we felt like he was right for it and everything kind of fell into place from there.

FF: How much input did you have in the making of the film?
BH: I was very involved, well actually my whole family and I were. We did everything from casting to scriptwriting to feedback on set to working on set and then I did some of the stunt surfing for Bethany (AnnaSophia Robb) once she loses her arm and I even went into the editing room and gave some feedback in there and I’ve been promoting it. I’ve been so involved, almost too involved in it.

FF: Have you seen the completed film?
BH: Yeah, it’s been out in America since April.

FF: What are your thoughts on it?
BH: I loved it, I’m really happy with the way it turned out. I was really paranoid that it was going to be this cheesy Hollywood dorky surf film and so I am stoked with it.

FF: Was it strange seeing an actress playing you?
BH: Yeah, definitely it’s a bit weird, but I really liked the girl who played me so that worked out good.

FF: What input did you have with the casting?
BH: My mum and I cast Anna Sophia who played me and then there’s this local girl called Malina (played by Sonya Balmores) who’s kind of like the rivalry in the contest and we helped cast her because she is from Kauai and I actually grew up surfing with her, she’s an actress too so that was rad. I cast Alana’s brother, he was the one that played Peter Pan and so kind of like a crush and I was like he should be in the movie to my director and that’s how he ended up getting the part. So funny things like that and a few other minor characters too.

FF: Was it emotional watching the film?
BH: No, for me I’m just like so not emotional about it at all which is great I’ve healed from everything real good. I think my parents probably got a bit emotional but you’d have to ask them.

FF: What do you think people can learn from your story?
BH: I think there are a lot of different things but I guess just seeing from my life for me my faith in God is a huge part of my life and just seeing how as a thirteen year old how a lot of people would get mad at God for allowing that to happen but I could see all the goodness that has come out of what seems like such a terrible event. I just hope that people can see that good can come out of bad things and I think it’s a matter of your attitude and how you chose to approach whatever you’re going through and just like looking for the good in things. Also the beauty in surfing, I love surfing and I hope that that can shine through the film and I think there are a few smaller elements that will be encouraging as well.

FF: While you’re in Cornwall are you planning to do any surfing?
BH: I surfed this afternoon and got a few waves in Newquay. I was freezing by the time I came in!

FF: With this being the opening of the first ever British Surf Film Festival are you excited to be involved in it?
BH: Yeah it’s rad! It’s just exciting that Soul Surfer has been able to go international. A couple of the producers and I went to Cannes earlier this year so that is kind of how we got Soul Surfer to be released internationally so it’s exciting. It did really well in the US so I hope it can do the same here. I mean for me it doesn’t really matter how it does it’s just exciting to be able to share my story in even broader terms.

FF: Do you have a favourite surf film?
BH: I love North Shore (1987) it’s a classic funny film and Modern Collective but that’s like a surf movie.

(From Q and A after the screening of the film) 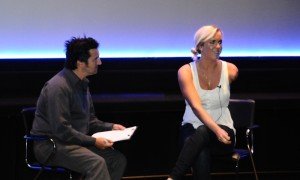 Audience member: I noticed Turtle (John Philbin) from North Shore at the end there, was there a slight homage to North Shore at the end of the film?
BH: Yeah I love the movie so we intentionally got Turtle from the film just for the sake of it and I got to go surf with him a couple of times, he’s classic. He’s actually real good friends with Helen Hunt so that’s how that worked out. I’m glad you caught that. Turtle is a really funny character from the movie North Shore; it’s like a historic Hollywood surf film that is kind of corny but really good. So I was thinking if Soul Surfer did turn out corny it wouldn’t be that bad!

Soul Surfer is out in cinemas now.