‘Sound Bite’ of the Week…Dunkirk at the Oscars.

Here’s what those nominated had to say:

Emma Thomas and Christopher Nolan:
“We are thrilled that the Academy has recognized the craft and talent of so many of the incredible people that brought the story of ‘Dunkirk’ to life. But most of all, this recognition helps us to believe that we have done some justice to honouring all those whose lives were affected by the real life events at Dunkirk.”Hans Zimmer – Original Music
“Thank you to the academy for this extraordinary honor and to be in the company of such great talent. I would especially like to thank Chris Nolan for his vision in making such a bold, and experimental movie into a success. This score is as much Chris Nolan’s work as it is mine and our collaborative spirit is infused through this film.  It is the hardest and closest collaboration we have done to date. The thing that I’m proudest about the work on Dunkirk is that you can’t separate the sound from the images. Chris and I have now been working together for 16 years and it’s always been our ambition, somehow, that the score and the images become one total experience.” 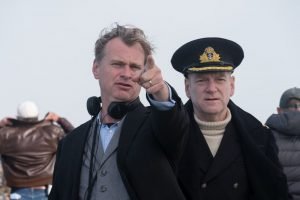 Hoyte van Hoytema – Cinematography
“I loved every bit of this journey with Christopher Nolan, overcoming great obstacles, both technical and artistic on a daily basis. Chris saw us through it all with both brilliance and wit, while keeping us on our toes with new curveballs and challenges. I am very proud of what we achieved and extremely grateful to the Academy for this recognition of our work.”Achievement in Sound Editing
Richard King
“I’m thrilled about my nomination for Dunkirk. It was a labor of love for everyone involved and I’m happy it’s getting the recognition it deserves.(This is Richard’s 6th nomination. He has won 3 Oscars for Inception, The Dark Night, and Master and Commander: The Far Side of the World.

Achievement in Sound Mixing
Gary A. Rizzo
“I wish I were as witty and funny as Tiffany Haddish at this hour of the morning.  I’m incredibly honored and equally nauseous for the sound mixing nomination and humbled by the Best Picture and Best Director nominations as well.” This is Gary’s 5th nomination. He won his first Oscar for Inception.

What do you think to Dunkirk’s nominations? Deserving? Or has your favourite been snubbed? Let us know in the commets below.