‘Sound Bite’ Of The Week…vacancy at the Smackdown Hotel

After a tense week, the Fast & Furious fam are finally back together, with Tyrese Gibson and Dwayne ‘The Rock’ Johnson burying the beef (is that a thing?). After Gibson gave Universal Pictures the “it’s me or him” ultimatum due to frustration over The Rock’s spin-off film, it seemed like Gibson would be put into park. Ahem. 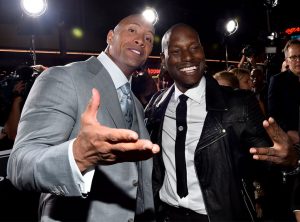 However, Gibson has now seen dollars and cents, sorry, sense, and let the world know via the ‘gram that he’s solved the issue with, err…one of The Rock’s associates:

“Want you guys to know I? had a real Heart to Heart with one of Dewayne’s associates and this will be my last post about him…….. I? repeat my last…. I? respect the associate who called.. My story will never change I? was never DJ’s Co-Star… I’m Shayla’s Father first…. Justin Lin is back in the driver seat that’s exciting cause it going to feel like the true #FastFamily all over again….. When we see Justin we see Paul…..”

Phew. Onto Fast Nine…and beyond!