Superheroes have always been cool. But they have not always been cool as live action features on the big screen – that they are so now is a more recent development. The coolness of superheroes is tied to the art styles through which they’ve been transmitted in their native four-color element: the comic book. In a static visual medium like the comic book, artists are free to tailor-make the visual style according to their specific strengths, and a long and illustrious list of masters of comic book art have done just that. By now, thanks to the trendy superhero movies of the past decade, far more people are familiar with the names of some of the most seminal of these artists; names like Jack Kirby (Avengers, Captain America, Fantastic Four, Hulk, X-Men), Steve Ditko (Spider-Man, Dr.Strange), Frank Miller (Daredevil, Dark Knight, Sin City, 300), John Byrne (X-Men, Fantastic Four, Superman) and many others. Each artist has his own style and can create a visually wholesome look of a high order; a look that no live action superhero movie has yet been able to entirely match.

But give them time; the movies are definitely getting there. The spectacular CGI special effects developed over the last decade, and the mere fact that superheroes are now taken seriously enough to merit big budgets and top-flight design work, are ensuring that the superhero movies are becoming more and more impressive; more and more visually distinctive. The only way for them to go is in a direction of higher quality, because they still have many decades of fantastic comic book stylism to live up to.

The thing about comic books is that it doesn’t cost any more to draw huge space battles than it does to draw everyday situations. Whereas in movies, doing a space battle that looks decent will be enormously expensive. But as (computerized) special effects are improving, the ability to do justice to high-concept (even cosmic) ideas is moving ever closer; creeping slowly from the wild imagination of the comic books and into fantastic cinematic forms of comparable scope and scale.

We’re not entirely there yet. Cosmic elements of the original stories for X-Men (such as the alien Shi’ar Empire, which provides the X-Men with their advanced technology) and Spider-Man (specifically, the origin of the Venom costume and character) were left out of the movies, probably on the assumption that such sci-fi high concepts would confuse mainstream audiences. Hopefully, as audiences mature to the big ideas of the authentic superhero universes, the cosmic elements will be put back into the big-screen adaptations.

The universe of the Marvel comics in particular – the stomping grounds of Spider-Man, Hulk, Thor, Captain America, Iron Man and the X-Men – has historically emphasized a shared world between all the comic books, so that what happened in one story would also have repercussions in other stories. The Marvel Universe is a single big action universe, where everything happens in relation to everything else, like in the real world.

Now that the franchise property is almost becoming the rule rather than the exception in superhero movies, we start seeing these interconnected stories. Granted, they don’t always manage it. The Punisher movies really don’t have any storyline connections with each other, and the connection between the 2003 and 2008 Hulk movies is also a bit iffy, because the character of the Hulk is portrayed quite differently. And as for the Spider-Man movies; now that the cast is changing, they have decided to reboot the entire story in the forthcoming Amazing Spider-Man rather than continuing from the first three movies. If quality is an issue, as it was in the Hulk movies, I don’t mind reboots too much, as long as they improve on what went before. But somebody should perhaps tell the Amazing Spider-Man producers that if something ain’t broke, it doesn’t need fixing. Apparently, however, the faces of the characters are considered more important to the overall impression and storyline than the story itself.

Fortunately, there are two examples of how to do it right. The X-Men franchise and the recent independent productions of Marvel Studios (Iron Man, Iron Man 2, The Incredible Hulk, Thor and Captain America: The First Avenger, plus the forthcoming The Avengers). The movies of Marvel Studios are particularly faithful to the comics, and where they depart from the comics, they put equally good ideas in their place, because they take the stories very seriously. Their five first movies are all building up to a climactic sixth: the highly anticipated The Avengers, directed by fan-favorite (and comics writer) Joss Whedon. And there are more sequels on the way.

This is the way to do it, and Marvel Studios are maintaining a very high quality level, garnering good reviews and ecstatic praise from the fan community. As an old-school comics fan who doesn’t love most of the comics that have come out over the last decade or two, what really impresses me about the new Marvel Studio movies is that they manage to blend together old and new story elements in a way that works shockingly well and feels completely fresh to old and new fans alike. I would not have thought it possible, had I not witnessed it with my own eyes.

Although its success story is not quite as mind-blowing as that of Marvel Studios’ independent productions, the movies of the X-Men franchise – a Marvel Studios co-production with 20th Century Fox – smacks of a very similar internal consistency and attention to continuity. Unlike the recent installments of a lot of other would-be franchises, from Superman Returns to The Planet of the Apes, there is never any doubt that all the X-Men movies (including X-Men Origins: Wolverine) take place in the same universe and are consistent with each other. Each film takes its point of origin in the previous ones, and although the franchise seemed in poor shape after the third entry in the series, X-Men: The Last Stand (2006), it managed to bounce back with a half-decent Wolverine movie (2009) and this year’s absolutely, gobsmackingly fantastic prequel, X-Men: First Class. That, gentlemen, is how you save a franchise. 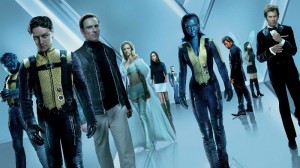 X-Men: First Class has the best kind of plot possible: a simple one based on a great idea. The idea is that the Cuban Missile Crisis in 1962 was an attempt by evil mutants to launch WWIII in order to destroy humanity and take over the world as the new master race. This movie chronicles what happened behind the scenes; what the public was never told. At the same time it tells the tale of how the X-Men became the X-Men. And it works beautifully. I have a special love for “secret history” type stories, and this was done just the way I like it.

The setting of the movie is the early sixties, and we witness Charles Xavier’s university days, and how he becomes involved in a secret CIA project which leads to the formation of the X-Men as a counter-measure to Sebastian Shaw and the evil mutants of the Hellfire Club. 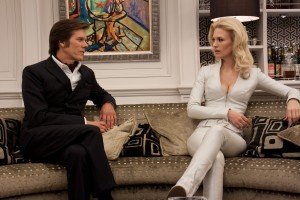 In the comic books, the Hellfire Club is introduced in the 1980s, but the movie transplant to the sixties is done in a thoughtful and admirable way. Sebastian Shaw is played masterfully by Kevin Bacon. Shaw used to work for the Nazis during WWII, and he discovers that the metal-controlling super-powers of the adolescent Erik Lensherr (later to become Magneto) are triggered by anger, so he triggers them good and hard by killing Erik’s mother in front of him. Erik (played as an adult by the magnificent Michael Fassbender) then spends his life searching for Shaw in order to kill him. 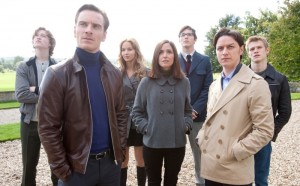 It is during this search that Erik meets Charles Xavier, and is inducted into the fledgling X-Men. Erik and Charles become fast friends, which is chronicled extremely effectively in the movie, but Erik keeps having problematic anger issues. By the end (which I am not spoiling here), during the big finish with Shaw and his evil mutants, Erik turns to the dark side and becomes a bad guy. 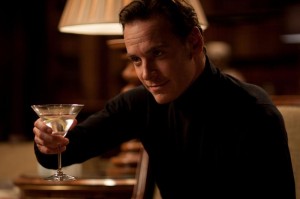 It is worth mentioning that this is, on the one hand, very inspired by the original comics, and, on the other hand, completely different. In the comics, Magneto is a bad guy from the beginning, but he later reforms and becomes a good guy and a close friend of Professor X. In X-Men: First Class, they are taking these elements and rearranging them, so the two start out as friends, and then become enemies. The movie chronicles this, as it does all its major plot developments, in a devastatingly dramatic way. The amazingly breath-taking, action-filled and emotional ending is a thing of beauty, providing symmetry, closure and a compelling reason why the X-Men subsequently had to practice their heroics in secret, independently from government and military, which is something that has never been adequately explained in the comics. This is the stuff that perfect prequels are made of.

The movie contains so much pathos, so much good acting and such a great and coherent storyline that it emerges as the best of the entire X-Men franchise. It perfectly juggles a large cast of characters and several substantial plotlines, and it does full justice to them all. One cannot find much to criticize, except perhaps one thing. As a long-time comics reader, I did feel that the movie could have contained even more references and homages to the original comics, because there is so much good stuff in those comics. For one thing, Emma Frost (truly excellently realized by January Jones) really should have been wearing the corset she had on in the eighties comics where she first appeared – it would have fit the sixties fashion style much better than the modern fur bikini she actually sported, which was inspired by her comics wardrobe of the noughties. But this is a minor complaint. This X-fan is one happy camper who seriously cannot wait to see the next movie in the series, especially starring this awesome cast!