Star Wars Fandom: Has It Gone Too Far?

Star Wars enthusiasts are a curiously determined bunch. Few other fandoms have propelled their beloved franchise to such mainstream recognition while also retaining as dogged an insistence on the importance of canonical detail. Star Wars has somehow made such pedantic nerdiness acceptable, and maybe even cool.

The release of The Last Jedi in late 2017 has revealed something of a militant side to this, however.  The film is the second saga instalment made without the creative influence of George Lucas, and it leaves us in no doubt that the original creator’s conception of the Star Wars universe has been unceremoniously abandoned. Unfortunately, this approach has not pleased everyone. Littered with glaring continuity errors, The Last Jedi has been lambasted by hardcore fans.

I myself am a Star Wars fan (albeit, I hope, a relatively reasonable one), and I sympathise with the feeling that Disney and co. have much to answer for. Logical inconsistencies and problematic scripting hamper The Force Awakens badly, and make The Last Jedi close to unwatchable. The spinoff movies are considerably better, but Disney’s obvious intention to create as many of these as possible (as has been their strategy with Marvel films of late) reeks of avariciousness, and will inevitably cheapen the franchise’s allure.

Less partisan filmgoers have defended the likeable characters and breathtaking special effects, claiming that the new saga entries work perfectly well as standalone films and that the zealots who say otherwise should just lighten up a bit. To the zealots, of course, that sounds like nothing short of sacrilege, and sacrilege that they are unwilling to take lying down. Numerous online campaigns, such as #BoycottSolo, #LastJediAwful and #RuinJohnson, have sought to discredit Disney’s work on the franchise and gather support for a change of direction for upcoming films. 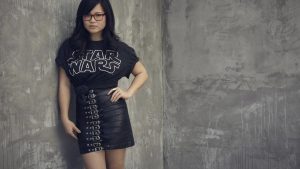 Unsurprisingly for movements that exist exclusively on social media, the protests have not always remained respectful. Kelly Marie Tran (the actress of Vietnamese descent who played the character Rose Tico in The Last Jedi) has borne some of the nastier elements of this, with large numbers of abusive comments being directed at her on various online comment threads. Her abrupt deletion of all the posts from her Instagram account on Monday has now sparked furious debate about the legitimacy of modern Star Wars fandom. Tran has not (at the time of writing) made any statement regarding the withdrawal of her posts, but it certainly doesn’t appear unreasonable to guess that months of sustained harassment might have contributed to the decision.

A certain amount of such unpleasantness is to be expected, of course. Anyone lucky enough to have a verified Instagram or Twitter page should be well prepared to be on the wrong end of the occasional distastefully worded rant. Unfortunately, Tran’s case is considerably more severe. Screenshots of her Instagram posts (many of which bear no relation to her involvement in Star Wars) that have been circulated online since their deletion show uninterrupted streams of disparaging comments. Some take aim at the character of Rose or the film in general, while others snipe at Tran’s physical appearance or ethnicity. While this is the most recently unearthed symptom of toxic Star Wars fandom, it unfortunately isn’t the worst; reports surfaced in April which told of multiple death threats sent to Rian Johnson in the wake of The Last Jedi’s release.

Clearly, then, Star Wars fandom has a problem. While a certain amount of disagreement with the direction of such a universally popular film series is to be expected, the level of organisation involved here, as well as the viciousness of a minority within it, is almost certainly unprecedented. What is it about the new Star Wars that has caused such ire?

The main point that critics of the new Star Wars era cling to is its supposed obsession with political correctness and identity politics. Put differently, their criticism is that the creators are more concerned with artificially diversifying their casts, in order to appear progressive, than they are with making entertaining movies.

On the face of it, one might be tempted to think that this is a fair point. Between Rey and Princess Leia, females have arguably become the dominant sex in the modern Star Wars universe, with Tran and John Boyega ‘ticking the diversity boxes’ in the race department. Given the contemporary social preoccupation with equality and inclusivity, and Disney’s requirement to appease its shareholders with fat wads of box office dough, it is not at all surprising that an element of such thinking might have pervaded the creative process.

Who cares whether the hero is a man or a woman when they could be doing their thing alongside a talking bluebottle or a reconstructed lawnmower?

However, to claim that this has had a substantial bearing on the quality of the films is ludicrous, purely because of the nature of the films themselves. The events of Star Wars, as the iconic opening scroll is always so keen to remind us, take place in a galaxy far, far away. Why, then, does it matter in the slightest about the earthly nature of the folk that play the parts? What difference does it make whether a character is black or white when they could just as easily be blue or green? Who cares whether the hero is a man or a woman when they could be doing their thing alongside a talking bluebottle or a reconstructed lawnmower? In a setting where such things are acceptable, depictions of gender and race cannot have any meaningful reflection on their status in our world.

Absent of the idea that there has been some deeper socio-political objection to the new films, we are again left with the question of how exactly the backlash became so fierce. Perhaps there is something about the movies that elicits especially passionate responses from followers. Perhaps the nature of the fanbase’s group dynamic is such that a no-holds-barred approach to debate is viewed as normal. The anonymity afforded by the online forums used by fans is certainly a contributory factor.

Whatever the root cause, the symptoms plainly need addressing. The shortcomings of the new films must certainly be discussed, but the manner in which this takes places needs moderating. If anyone reading this is a Star Wars fan who has succumbed to the temptation to take it all a bit too far, please just stop. You’re ruining it for the rest of us.

Where do you weigh in on Star Wars fandom/fanaticism? Let us know in the comments below.