Where to begin with Stargate (1994)?  Arguably one of the finest sci-fi action films to survive the 90s- take my word for it- it still holds up admirably well by today’s standards.  Mixing the ancient history of Egypt, aliens, distant planets and portals, Stargate has it all.  Plus Kurt Russell.

The film opens with a discovery the likes of which have never been seen before; a huge circle with strange markings around the outside.  Intriguing enough.  Fast forward to “modern day”, we get our first glimpse of bumbling archaeologist and linguist, Dr Daniel Jackson (James Spader) who’s theories aren’t well-received yet gets offered the chance to prove those theories right.  Does he take it? 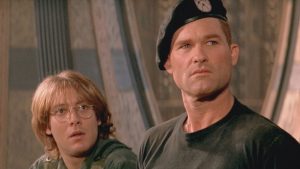 A team of soldiers led by Colonel Jack O’Neil (Russell- The Hateful Eight) and Jackson enter into another world on a quest for knowledge and exploration.  Upon entering the other planet they become stranded and must find the symbols to return home.  They encounter a human tribe, false gods and have to fight for their lives, cue some witty one-liners. 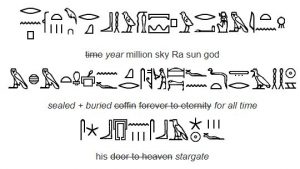 Originally criticised for an overuse of effects, Stargate has indeed aged with time, but this is to be expected considering the evolution of films in over 20 years.  Having said that, the film still holds up to audiences perhaps of an older generation or those too young to notice.  Either way, the effects do not detract from enjoying the thin story-line (since when did an action film really need a story?). 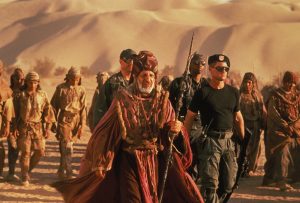 Some criticize the reactions to successfully operating the Stargate, citing them as unrealistic- wonder and awe are left back on earth to make way for O’Neil’s, “Track down signs of any possible danger. If I find any, blow up the stargate,” which back in the 90s, was all a kid wanted really.  And yes, the film does end with a final fight between the soldiers and ‘gods’ while a ticking bomb denotes a close end (including red count-down).  Sure there are more cliches than you can throw a spanner at, but at the end of the day, Stargate represents a good old action film which should be watched to be enjoyed.

Perhaps it is the misty eyes of nostalgia talking, but Stargate is still a great film, especially for those Sunday afternoons when you just do not know what to do and with the rumoured reboot trilogy and new series delayed, get your fix of Stargate sci-fi with this.

Is it worth watching still?  Most certainly.  Disagree?  Why not give it a watch and see if that changes your mind- leave your comments in the box below.

You can watch it on Amazon Prime from June.