A SURVEY OF NEW DIRECTORS/NEW FILMS 2011

New Directors/New Films, shown to the public from March 23 through April 4, 2011 this year, brings to New York a selection from recent international and local festivals or fresh from the editing room – movies to introduce directors with their first or second films, or sometimes a director who’s been around longer but needs to be better known.  There were 28 this year, presented as usual by the Film Society of Lincoln Center and the Museum of Modern Art.   Coming right after the popular Lincoln Center-IFC series Rendez-Vous with French Cinema, ND/NF livens up the deadest time of the American movie year with some of the best, most original new stuff the world of cinema has to offer.  This is a very good year for the series.  Of the first ten films shown to the press, almost all were fine.  Needless to say, that’s not always true.  You can’t take chances and have no missteps.  But everything was worth knowing about, some introduced names to watch, and others were films to come back to again and again and recommend to everyone – or nearly everyone.  Starting with the four that seemed strongest overall: 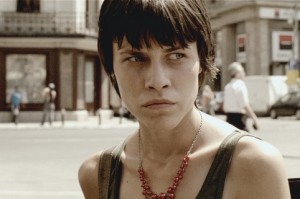 An intense, non-stop Romanian story about a young woman released from jail for one day. Its powerful ending evokes the great Italian neorealists. This is a pretty nearly flawless film, which follows the current Romanian style of focusing on a minute-to-minute saga, under intense pressure of time and with a confrontation of moral as well as practical issues.  The movie is anchored by a determined and utterly convincing performance by the young actress in the lead, Ana Ularu, as Matilda, the desperate, strong-willed young women protagonist. 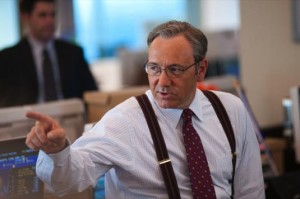 A fresh, elegant look at the beginning of the Wall Street financial meltdown by a new American director, featuring Kevin Spacey and Jeremy Irons. It all happens in a dark steel-and-glass box but it’s quite cinematic nonetheless.  This opening night film in ND/NF was made on a very small budget using very few locations and yet it manages through the excellent writing of Chandor, informed by his father who worked as a broker for four decades, to encompass the vast world of a powerful firm and by direct association the whole global economy.  The opening night film of the series. 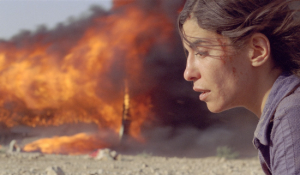 A powerful, visually rich look at a personal family heritage of Middle Eastern conflict. The director is a French Canadian, whose films have four times been nominated for the Best Foreign Oscar. From a stage play that is full of lengthy monologues, Villeneuve made something thoroughly cinematic, with some hair-raising moments of violence and danger, and a lot of subtitled dialogue in Arabic as well as French.  None of that would work, except that  audacity of mise-en-scène is balanced by passion and moral awareness.  Villeneuve has been nominated four times for the Best Foreign Oscar, and though his reputation as a serious filmmaker is high, he needs to be known to a wider international audience and this film is a big step in that direction. 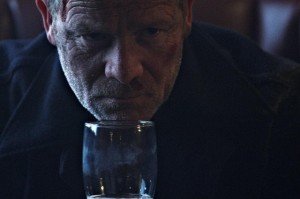 A brilliant, harrowing portrait of English violence and alcoholism on the path toward love and redemption with all the focus on the superb acting. Peter Mullan is the star, with Olivia Colman and Eddie Marsan in the key secondary roles. You may want to look away but you cannot, as you watch a man who provokes young toughs and in a fit of mindless uncontrolled rage kills his own beloved dog.  Horror at what he has done and the danger he is in bring him into the sphere of a pious woman who runs a charity shop.  As they become more involved we discover that her world is nearly as disturbed and dangerous as his.  This is the writing and directing debut for the respected actor Paddy Considine, in collaboration with Mullan, himself established not only as an actor but writer and director.  The simplicity and focused intensity of this movie make it unforgettable.  People differed at the press screenings on whether the searing Tyrannosaur can be recommended. I’d warn people about its ugliness and violence, but it’s far too masterful not to be warmly endorsed.
The ND/NF series introduces directors, writers, and actors with a high level of competence or promise. Dee Rees’ Pariah, a young black lesbian coming-of-age story, has some beginner’s flaws (it’s her first feature) but is warm and colorful, one of the most enjoyable of the series. It introduces Adepero Odue, as the 17-year-old protagonist, a young actress of tremendous naturalness.   Ahmad Abdalla’s Microphone, a musical mélange about Alexandria, Egypt’s “underground” music (including rap and hip hop and skateboarding), is also enjoyable, and, if loosely structured, it’s also beautifully edited to achieve a seamless flow.  Fukada’s Hospitalité, which skewers Japanese passivity, secrecy, and fear of foreigners, is very clever, and Fukada,, a man of the theater, is good with actors; this Japanese writer-director has it all together. His film degenerates into silliness toward the end; one hopes in future his brilliant films develop a bit more warmth and depth. Anne Sewitsky’s Happy, Happy is an adultery comedy from Norway that’s quite funny if occasionally a bit too condescending toward its characters.  It seems offensive at times, but it has telling moments and is well acted, and the sense of accelerated misbehavior in a chilly, confined locale is appropriate to the place of origin.  Göran Hugo Olsson’s Black Power Mixtape has a wealth of new footage about the Sixties and Seventies, a treasure-trove found in Sweden to which some contemporary comments by participants from the time have been added. It may or may not add to our basic fund of knowledge of the period, but it definitely makes us look at the subject with fresh eyes and will introduce it to a new generation.   The Vega brothers, Daniel and Diego, from Peru, whose Octubre was shown, seem already well established on the festival circuit with this first film, with a slightly derivative dry stylishness to which they have added a tiny dab of uplift in their portrait of a stone-hearted money lender whose heart softens a bit when he’s saddled with a baby and has to hire a neighborhood spinster lady to help care for it in his house. The Vegas have a lot of style; time will tell if it’s truly their own.  Pia Marais’ At Ellen’s Age is an offbeat tale about a German flight attendant whose life runs off the rails when her relationship crumbles, leading her into involvement with animal rights activists.  None of it might be compelling except for the presence of the iconic Jeanne Balibar as the distracted yet uniquely self-possessed main character, and Marais’ ability to interweave contrasting people and locations. Marais is no a beginner, but her sui generis outlook needs more recognition.

I was not so enthusiastic about the French films.  Marc Fitoussi’s Copacabana, with Isabelle Huppert and her daughter, which I reviewed last year, seems lackluster, Huppert doing an “eccentric” shtick that ill-suits her. Mikhael Hers’s Memory Lane, a first feature depicting a generational reunion of young adults who grew up in the same middle-class suburb of Paris, is unfocused and slight, even if it has that French light touch. People differed on Rebecca Zlotowski’s Belle Épine. I can grant that this dark girl’s coming-of-ager shows promise and originality, not that the film tells, for me, a fully coherent story. However, these films all show the French still confidently reweaving their own styles and traditions in their own ways.

Arabic language films were well represented, with four if you count Incendies, which has a lot of Arabic dialogue though it’s French Canadian. This seems prescient, in view of the incredible excitement in the Middle East this year.  Besides Microphone, there was another engaging Egyptian film, Mohamed Diab’s Cairo 678, and  a mild-mannered Palestinian entry, Sameh Zoabi’s Man Without a Cell Phone. Cairo 678 was the best received, but I found Microphone enjoyable and it was a prize-winner in Egypt and Doha.  All of them were made before the current wave of revolution began to sweep across the Arab world, but the Egyptian ones clearly show the seeds of ferment. And that’s one of the best things about a series of this kind.  It not only soaks us in fresh cinematic talent but gets us away from the considerations of profit and entertainment and closer to what’s going on in the world.