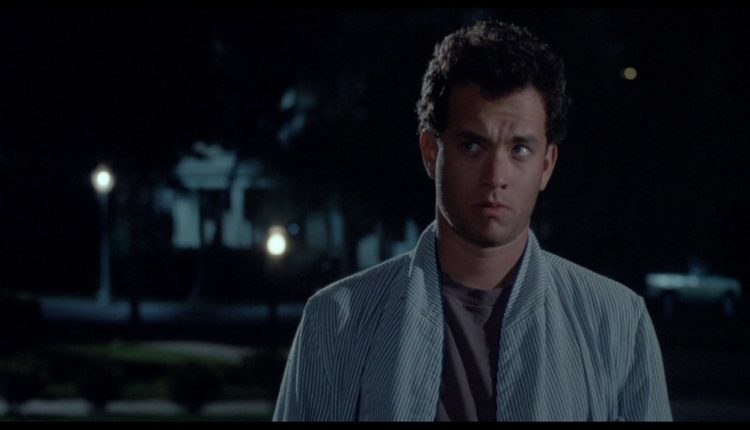 A not-insignificant amount of seventies American cinema was concerned with the political and cultural milieu of the era. Dozens of films reflected, both directly and indirectly, the paranoia, disillusionment and powerlessness invoked by events like the Watergate scandal and the country’s failed military intervention in Vietnam.

This vein was most apparent in the nascent conspiracy thriller genre. The Conversation, All The President’s Men, and Three Days of the Condor, all suggested that the shadowy corridors of power were darkened so as to facilitate the extrajudicial surveillance, entrapment and killing of innocent people by a corrupt state. It was a heavy time.

Fast forward a decade and boy, how things change. The world didn’t necessarily get any better, but at least the clothes were brighter and the mood sunnier. With ten years separating these scandals, the then-present, paranoia was free to be mocked once more. It is into this landscape that Joe Dante brought us The ‘Burbs, the first conspiracy comedy.

Producer Brian Grazer thought of Dante for the film “because it’s a mixture of comedy, horror, and reality.” The director was indeed already adept at genre-splicing by this point, having successfully bolted together those differing tones in Piranha, The Howling and Gremlins without either limb going septic.

Working from a script by Dana Olsen (one of those Hollywood one-hit-wonders; since then he brought us the live-action adaptations of George of the Jungle and Inspector Gadget…), The ‘Burbs riffed on some of the key themes of those seventies films by Alan J Pakula and Sydney Pollack. This was, namely, just because you’re paranoid doesn’t mean they’re not out to get you. However, The ‘Burbs had the same broad, cartoonish comedic sensibility which is presumably the reason Dante was eventually drafted in to helm Looney Tunes: Back In Action.

Ray Peterson (Tom Hanks, beclad in a dressing gown for the whole movie, like a suburban Arthur Dent who has had his unflappability forcibly removed) has taken the week off work. Rather than head off to some exotic locale, visit family or otherwise make real use of his holiday, he’s opted to stay at home and be a man of leisure about the house. Or at least, that was his plan, until excitable neighbour Art (the wonderful Rick Ducommun) begins casting aspersions as to the creepiness of the new members of their quaint neighbourhood, the Klopeks. 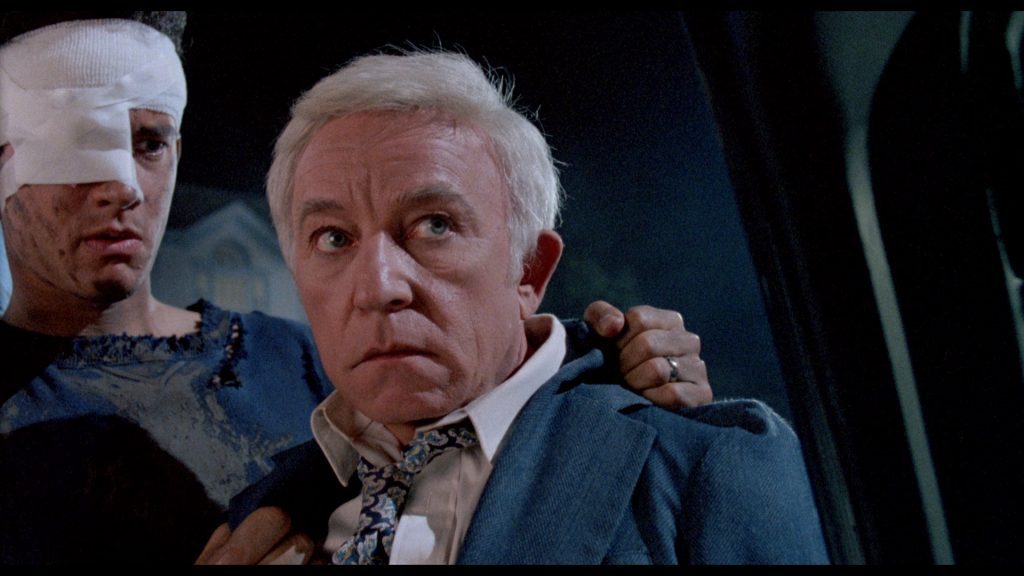 Ray and Art team up with eccentric war veteran Mark (Bruce Dern, bizarrely but brilliantly mining his Coming Home role for comedic effect rather than pathos) and neighbourhood nuisance Ricky (Corey Feldman in full The Goonies precocious charm offensive) to investigate the strange noises emanating from the Klopeks’ house, the bright lights bursting from their basement windows, and the general “creepy” vibe the family give off.

The set-up sounds like a Twilight Zone episode where, of course, the twist is that the weird new neighbours are up to nothing untoward in the slightest, and the whole thing is an allegory for becoming more accepting of people’s differences and less suspicious of the unfamiliar other.

Except The ‘Burbs really does paint the Klopeks as proper oddballs. Mute Hans (Courtney Gains) has a hillbilly wardrobe and bizarre, patchy copper beard, the teutonic Uncle Rube (Brother Theodore) is immediately assessed by Art to be some ex-Nazi scientist who benefited from a Operation Paperclip-style pardon by the US government, and presumed patriarch Dr Werner Klopek is played by Henry Gibson, the Illinois Nazi leader from The Blues Brothers, which is an immediate red flag.

Still, The ‘Burbs manages to deftly tug you hither and thither, between believing the Klopeks really are up to no good one minute and damning Hanks’s Ray as being a paranoid nut, gone stir crazy from too much time cooped up in the house, or else too susceptible to Art’s own admittedly eccentric point-of-view the next.

The latter camp is aided by Carrie Fisher as Ray’s wife Carol. The late, great Fisher gives her role as the voice of reason greater humour and personality than such a thankless part – more often than not characterised as a “hectoring woman” – usually gets. After all, who needs a reality check in a film so distanced from reality?

Not unlike Gremlins and its even more out-there sequel, The New Batch, which would follow the year after The ‘Burbs, Dante and cinematographer Robert M. Stevens give the film a hyper-real look, from its over-saturated colour palette to the rubber-band camera moves. Mayfield Place has the same eerie white picket fence perfection as the idealised Lumberton of Blue Velvet. As with David Lynch’s breakthrough film, there is certainly no small amount of weirdness and the abject going on beneath those perfectly-manicured lawns and hedgerows.

Despite how far out The ‘Burbs gets at times, there’s a core of genuine observation in that one weird neighbour who nobody ever talks to, or never really sees, and whose absence allows elaborate fantasies to be woven, without the subject ever appearing to dispel them. Indeed, the script was inspired by the weirdness Olsen experienced regularly in the outwardly-idyllic small town he was raised in.

“When I tell people about the story, a remarkable number say, ‘On my grandmother’s block, there were people like that. They never mowed their lawn, and they never came out, and they let their mail stack up, and nobody knew who they were,’” said Dante. “And I must confess that in my own neighbourhood there’s a house like that, falling to wrack and ruin. I think this is perhaps a more common even than most people are aware of.” 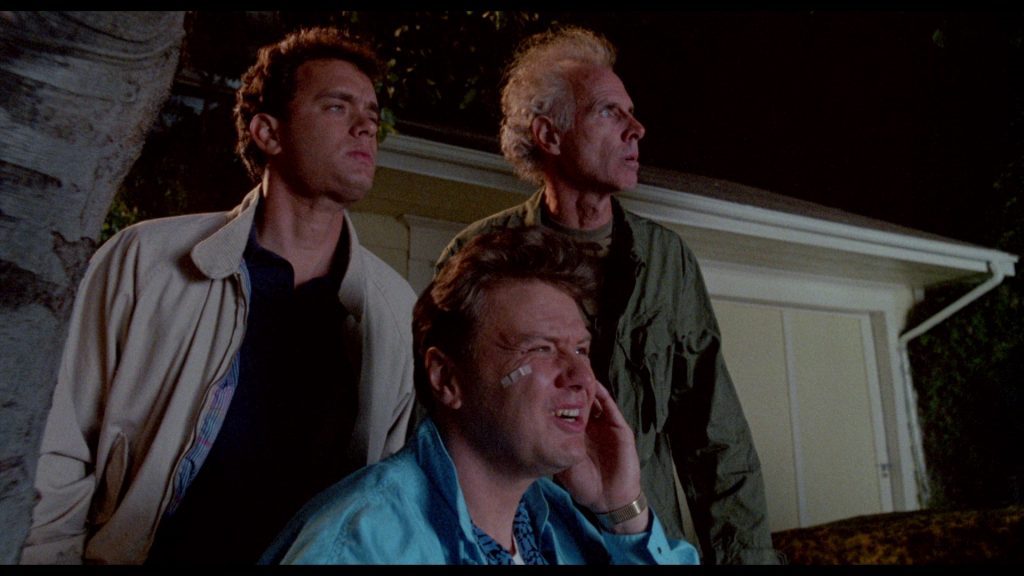 Hanks described the director’s approach as “a stylised, visionary way of looking at the entire movie. It’s pure film-making – the story is told from the camera’s point of view.” Realism is not the order of the day in The ‘Burbs, even if its origins lie in real-life experience. The live action cartoon vibe runs through every part of the film, from the look of titular ‘burbs to the performances.

Hanks’s comedic chops are now mostly delivered in a sound booth, his exaggerated exasperation, terror and exhaustion as Ray an effective demo reel for his performance as Woody in the Toy Story films. Each of the Klopeks is pitch-perfect as well, larger-than-life yet still capable of maintaining some ambiguity as to the true nature of their ominous vibe right to the film’s climax.

That a film which mostly deals in camp exuberance and pure silliness successfully maintains the mystery for almost its full running time is perhaps the most dazzling thing about The ‘Burbs. It’s a high-wire act that succeeds through the strength of its cast, its premise and a consistent tone which draws humour from the core tension: is Tom Hanks right to believe that his new neighbours are committing violent acts of murder in their basement, or is he just a xenophobic curtain twitcher who needs a hobby?

Why not watch, and let us know in the comments below…

The Batman To Be “Definitive, Noir-Driven” Says Matt Reeves