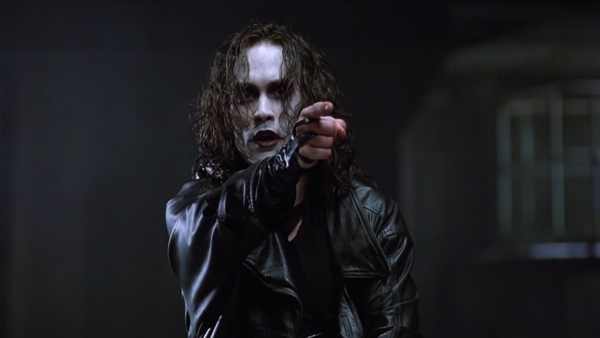 It wasn’t until the news broke about both Jason Momoa and director Corin Hardy abandoning The Crow remake that we realised how much we wanted it in the first place.

Ten long years since its conception, the troubled remake stalled again, this time due to what Deadline reported as “to do with creative and financial differences with Samuel Hadida, whose Davis Films holds the underlying rights and who was financing the film.”

What better time to remind ourselves just what’s so special about 1994’s The Crow. As the resurrected and terribly named Eric Draven (Brandon Lee) goes about seeking vengeance for the vicious rape and death of his wife, the vigilante breaks up a business meeting with the Big Bad himself, Top Dollar (Michael Wincott).

Watching the scene back with a freshened-up perspective, the parallels between meeting The Crow and meeting The Joker in Christopher Nolan’s The Dark Knight are striking. But whereas The Joker’s violence is reasonably restrained (just a lil’ pencil into the frontal lobe, nothing major), The Crow goes HAM: Hong Kong gun-play with infinite ammo, Samurai swords slicing tables like butter and the best kick through a window since Shawn Michaels turned on Marty Jannetty.

This is often wrongly assumed to be the scene where Brandon Lee met his tragic end, due to a shotgun-inflicted bullet wound to the stomach. The violence here is comic but never comical; the odds against our hero are laughable and how anyone can see who/where they’re shooting is a true movie miracle.

With that being said, any remake would have a tough time recreating the same balance as The Crow: believable, bonkers but completely bad-ass.

Keep your eyes peeled on Flickfeast for further news on The Crow remake.