Tahar Rahim only came to widespread notice five years ago when he landed the lead role in Jacques Audiard’s brilliant prison drama A Prophet. Since then, he’s continued to build an impressive CV, working with some of the best filmmakers currently active. The latest to secure his talents is Fatih Akin who cast him in the lead role in The Cut. Tahar plays Nazaret, an Armenian who loses his voice after his attempted execution during the Armenian Genocide goes wrong. He then sets out on a journey to find his missing daughters.

In the second of two interviews (see here for our interview with director Fatih Akin) following The Cut’s premiere at the 71st Venice International Film Festival, Flickfeast joined Tahar as he spoke about his involvement in the film, his desire to step behind the camera one day and his forthcoming move into comedy roles.

How did you come to be involved in the The Cut?

Tahar Rahim: Fatih Akin came to me. I’m a fan and really love his work. When I knew he wanted to meet me I was so happy and I really loved the guy. I found a connection with his background as the son of an immigrant who loves films. When he told me the story, I said this has to exist and I had to go for it. The challenge of playing a mute without signs was enough to make me go with it.

What did you know about the Armenian Genocide beforehand?

TR: I didn’t know a lot. I knew there was a genocide and a lot of people died and that was really all. On taking the role I talked with several Armenians and told them to tell me the story of their parents and where they moved and there was something common. They couldn’t fight back so they stayed humble like Nazaret. You can only imagine the trauma they must have gone through.

How did you approach the challenge of playing an entirely physical character?

TR: First of all I met two professionals on mutism; a doctor in Germany and an expert in Paris and asked them hundreds of questions. I wanted to know how a voice could be lost for eight years and found again. They said if you cut both vocal chords it’s lost for life which is why we moved the cut in the film to the side of his neck.

The doctor also said it’s possible to recover the voice one day as an emotional shock can block the voice and another one can make you talk again. I also met two different types of mute – one natural born and one who lost it in an operation. We did an exercise where we tried to communicate together without signs and I realised you really talk with your eyes. Its little things – the sensitivity and humour that comes across in that. And the guy who lost his voice in an operation was like he had a volcano burning inside him because he could no longer speak out.

Why is it important that Nazaret can’t talk for most of his journey?

TR: It’s a metaphor for the Armenian people who had their legitimacy taken away. They can’t say what happened to them. That’s why he couldn’t have his voice.

Did you keep silent on set to get in character?

TR: No, come on. When it finished I talked man. It was frustrating to not talk, to not scream. It helped the character though. I have to find the trauma of the guy. It’s not just a guy who’s not talking. He’s been traumatised. He saw his brother die in front of him and has a knife in his throat and his family taken away so he’s internalising everything.

You mentioned that you’re a big fan of Fatih. What is it about his work that fascinates you?

TR: The humour. They are like rock and roll movies. He’s also not afraid to have people say what’s happening. You can see the new Hollywood influence in his work, people like Scorsese. I really relate to those films and Fatih’s and recognised myself in them. 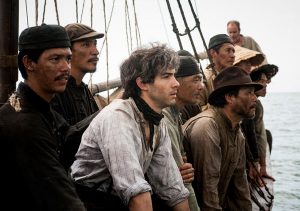 What’s he like to work with on set? Does he give his actors much freedom?

TR: Surveilled freedom. Which is what I love. It’s what I want from a director. I want the right direction with enough freedom to build on.

Fatih mentioned the influence of westerns on The Cut and the research he did watching 1920’s films like The Kid. Did you do the same?

TR: I watched the Dollars Trilogy for prep as Clint (Eastwood) doesn’t talk a lot. I’m also a fan of the films of Sergio Leone, John Ford and John Huston. And I watched a bit of Chaplin to help inspire me for playing the character without copying him.

What is it about Chaplin that you value?

TR: Oh so many things so I’ll say one. Chaplin is cinema. What he did is amazing. My favourite isn’t a silent movie – it’s Limelight. It has music, images, stories – he was doing everything. He was cinema. I haven’t seen it before and haven’t after.

You’ve worked with a number of great directors including Jacques Audiard and Asghar Farhadi as well as Fatih. How do they compare?

TR: They are totally different and each have their own way.  A director needs to know themselves to do it properly and put their energy in. Audiard wants to be surprised. He’s all speed, likes little text and normally only does two to three takes. Beyond five and he gives up for now to move onto another scene. Farhadi is quiet and takes his time. Every detail is important and he’s like a painter. Fatih is part technical, part instinct and speed too. When he wants something he takes it.

To hear you talk about films, it’s surprising you’re acting and not directing. Do you want to do that in the future?

TR: I would love to do that one day but I’m only just beginning to know who I am as a man. You can’t pretend to at 20 and then from 30-40 you try to find answers which is now happening to me. When you reach 40 you know which man you are. I’m beginning to understand the questions I need to answer to make a movie but I need to wait a little bit to find self-confidence in writing. And to do that I have to stop acting and I don’t want to do that. It’s so hard to make a bad movie so can you imagine how hard it would be to make a good one.

How do you like to be directed, and when you take the step how do you think you will direct actors?

TR: I don’t know how I will direct – experience will tell – but the most important thing is to ensure that the actor trusts you personally. You have to invite him into your universe. What I love most and what experience has told me is that I instinctually try to enter the director’s universe. When I admire someone I enter his world and we understand each other. If I were directing I would drag the actor into my world.

Your next two films coming up are both comedies – is that a coincidence or did you want to try comedy?

TR: I’ve always wanted to do comedy but it was never the right time. You have to feel it, especially for comedy. If you feel uncomfortable you’re dead. Eric (Toledano) and Olivier (Nakache) came to me and said we’ve written something for you and I said yes straight away. They stopped me and told me to read it first. I still said yes. They said they wanted to give people what they saw in me.  I found doing the film (Samba) that day by day you open your eyes and improve. It was helpful to do Samba first where I’m only a supporting role. I then did Le pére Noël where I’m the lead and I’d learnt a lot more about comedy having done Samba with Omar Sy. He’s great and helped a lot. He said comedy is like dancing. You have to feel it. I enjoyed it and want to do more.

Finally, what do you hope the audience takes away from The Cut?

TR: First, I would love them to see it and second to identify to the guy on this journey. It’s a family love story finally. If they come out with all these emotions and learn something about the history then we’ve done a good job.

Flickfeast would like to thank Tahar for taking the time to discuss the film. The Cut premiered at Venice on 31st August. Our review can be found here and our interview with Fatih Akin here.