The Mummy vs The Mummy: Which One Wins?

by Ben Berwick
in Spotlight

The year is 1999. The world is nervously waiting to find out what will happen when the Millennium Bug hits, whilst at the same time preparing to get drunk on a scale never-before-seen. Tony Blair was still arguably in his honeymoon period as New Labour’s Prime Minister and Manchester United (boo, hiss!) won the Treble. It was also the year we were introduced to Rick O’Connell, lead character  of The Mummy, played by the likeable Brendan Fraser. This was an affable movie all-round (though not in fact a family-friendly film, carrying a 12 certificate), with a charming male lead, a feisty female lead and a charismatic-yet-frightening villain. It’s hard not to like Rachel Weisz and John Hannah, with Arnold Vosloo taking on the film’s titular monster with great aplomb: charismatic yet leaving the audience in no doubt as to his power.

The film harked back to the era of the monster movies, with the same swashbuckling spirit of adventure of the era. It was impossible not to like, even if the sequels weren’t as good. 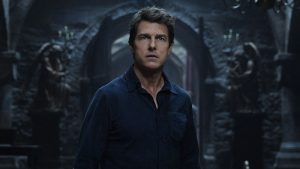 Then, eighteen years after the first appearance of O’Connell, we would receive an updated version of The Mummy (2017): a remake with, among others, Tom Cruise and Russell Crowe in the cast. The scenario also moves to the modern era. Cruise’s character of Nick Morton possessed none of the charm of O’Connell and the shoddy attempt at universe building that saw Crowe pop up as Jekyll and Hyde didn’t really do anything to help a film that was…not awful. That’s about the only compliment I can pay to Cruise’s remake. The whole thing just lacked any…charm, warmth, charisma, call it what you will, but it didn’t have any heart. I get that maybe it wasn’t supposed to. Maybe the producers and writers wanted to distinguish this film from the 1999 version in as many ways as possible, but if you don’t relate to the characters, you won’t care if they are placed in peril. I certainly didn’t feel invested in whether or not they lived or died.

It would not be fair to accuse Cruise (that’s a mouthful of a line) of playing the role badly – he merely did not have a script or character to work with that was in any way one I could find anything to connect to. He might have died at the end and my reaction would have been ‘meh’. This might be the biggest overall problem with The Mummy (2017) – it was ‘meh’. Fraser meanwhile, very much looked like a handsome, rugged explorer – can I, as a man, objectively pass judgement on who looks more like an intrepid adventurer? Yes, yes I can! Everything just clicked back in 1999. 2017… not so much. Even Russell Crowe (husband to a… never mind) could not bring much more than what felt like a half-hearted effort to a disjointed role. Compare to how much of a scene stealer Vosloo was every time the Mummy made a terrifying appearance… need I say more?

To Make or Remake?

This might all lead to a longer rant about remakes in general – was a new Mummy film even necessary? Is the trend of remakes something that betrays a lack of creativity in Holywood, or a desperate desire to recapture past glories? What with a Child’s Play remake reportedly in the works and a Tomb Raider movie earlier this year, are we reaching a point where originality is sacrificed in favour of what is deemed ‘safe’? Within this question is another question: When remaking films, to what degree should the original be honoured? Circling back to The Mummy – Fraser’s first film was in itself a remake of a 1932 film of the same name, whilst we also had a Mummy movie back in 1959 – starring Peter Cushing and Sir Christopher Lee, no less. Cruise’s film is the one that changes the setting the most, is that perhaps why it fails? Or is it because of something else? Ironically, the notion I referred to about playing it safe is maybe not applicable here – The Mummy (2017) might be guilty of pushing too far in the other direction, along with devoting time to the popular pursuit of world-building, rather than trying to stand as a good film on its own merits.

I might have to state then, clearly and for the record, that The Mummy 2017 is guilty of not honouring the originals – it takes the setting and changes pretty much everything. It tries too hard to link everything into a shared universe that, as of this moment, might never even happen. The film wasn’t about its own story but about other stories, later down the tracks, minus the charm and charisma of the originals. As for the questions – is Hollywood too safe, or lurching too hard in the other direction? I’ll open that one to the floor, so to speak.

I’d love to hear what people think! Let us know in the comments below.